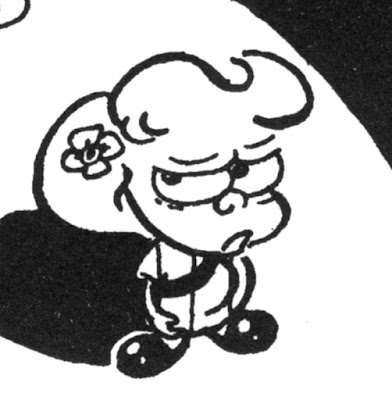 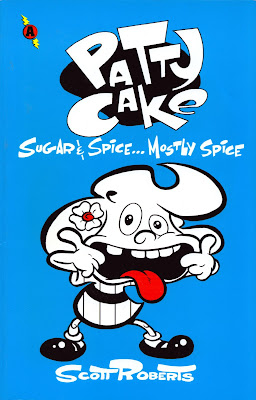 Patty Cake Vol. 1 Sugar & Spice... Mostly Spice [2001]
This is a collection of some of the earliest of Scott Roberts long-running PATTY CAKE series, taken from the first three  (of nine) issues self-published by Roberts (as Permanent Press) in 1994-1995. By the time of this book it was on the fourth series, being published by Slave Labor imprint Amaze Ink, eventually seeing at least 44 issues by 2005, many of them double sized.
This is pretty good stuff. I first read this material a few years after it was done, after I'd already some of Roberts' later work. I think he improved very quickly and is much more confident and polished within a year, but there's a lot of heart and potential in this rough earlier material. Roberts is heavily inspired by classic humour comics, most notably Harvey Kurtzman, with a frantic energy and an anything-for-the-gag ethos. Even early on he varies the contents from longer stories to single page strips, pin-ups, phony ads and activity pages. He also introduces a few of the cast of family and friends that join young Patricia Bakerman in her journey to discover how the world works, a cast which would grow much more in later issues. 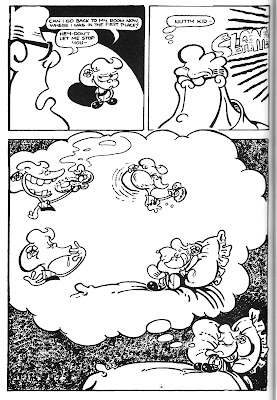 I think my favourite story in this collection is "Surprise Twist", a 16-page epic about Patty Cake's father taking her on a shopping trip. To the surprise of no one who's taken a kid shopping, it doesn't go well.  It's a real emotional roller coaster, and Roberts cartooning is really excellent in catching every single feeling Patty Cake goes through.  A nice glimpse of the kind of stuff Roberts would be doing more often in years to come.
No comments: 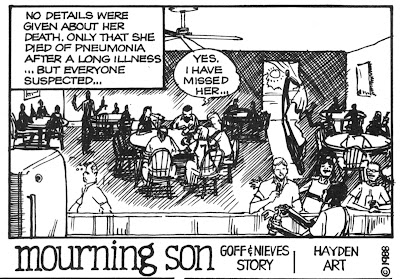 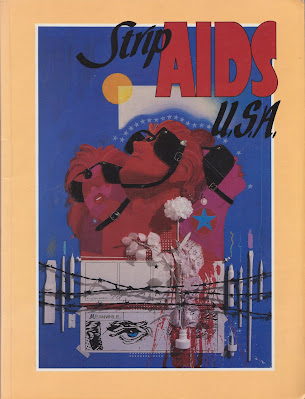 Strip AIDS U.S.A. [1988]
This is an anthology edited by Trina Robbins, Robert Triptow and Bill Sienkiewicz, published by Last Gasp and inspired by the STRIP AIDS anthology published the previous year in the UK. It was designed to raise funds for an AIDS charity and awareness about the disease.
Most of the pieces were newly created for this book. The notable exception are five pages of syndicated newspaper comics addressing the issue scattered throughout the book, led by Garry Trudeau's Doonesbury.
Obviously this is an artefact of its time, almost always well meaning, so hard to criticize, often strident in a way that's understandable in the context of the time, but sometimes awkward now. 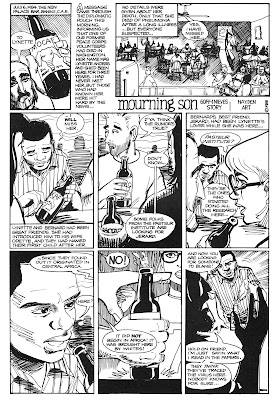 For me the highlight was "Mourning Son", a story set in the world of TALES FROM THE HEART by Cindy Goff, Rafael Nieves and Seitu Hayden, a series based on Goff's experiences as a Peace Corps volunteer in Africa in the early 1980s. Great little story looking at the issues from a different angle from the other stories.  Man, that series really was one of the great unfinished symphonies of 1980s comics...
Too many other things to talk about, and sometimes hard to find them with the lack of a table of contents (this listing is therefore invaluable). A few other highlights were by Howard Cruse, William Messner-Loebs, Alison Bechdel, Gilbert Hernandez and Jaime Hernandez.
No comments:

Hm, I've actually posted quite a bit in the last few weeks, and not just obituary posts. That had to come as a surprise to my regular reader(s?).

So, what's up with that?  Well, I pass this "beautiful, gory layout" a few dozen times a day (and there's another bookcase, plus some stuff in boxes). 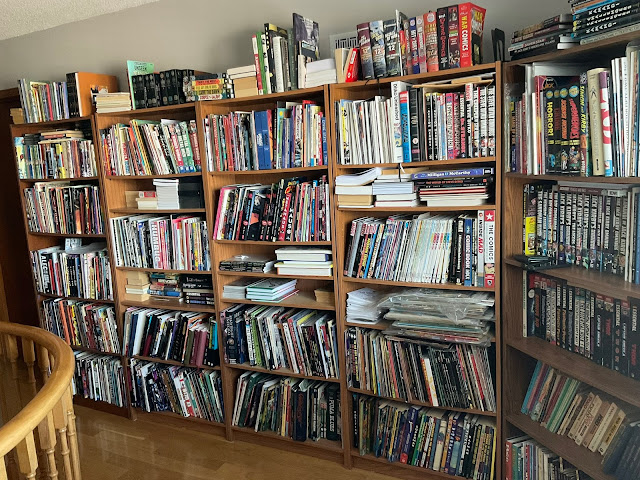 This is almost every comic publication I have not in standard US comic book format, over 1800 individual items. But sometimes it seems I keep re-reading the same five books (slight exaggerations). Most of these I've read, although some not in decades (and my memory's not so good these days). A good number I started but never got around to finishing. Some of them I never got around to reading, either because I got them with a pile of other things I was more eager to read or wasn't in the mood for at the time and they just got lost in the shuffle. So I've decided to take a stab at (re)-reading all of it over the next few years. I figure at one book I day I can manage that in five years. So I grabbed two dozen of the books at a whim, pretty much one from each shelf, and every day I try to read at least a bit of each. I make up complicated rules on how much I can read a day (which I freely ignore if I get caught up in a section).  Been working pretty good so far, finished about 20 books in the last two weeks (replacing each in the reading pile with another from the same shelf).
This coincided with me having the urge to write some more on this weblog, so as you might have seen, lots of unusual activity lately. For some reason my instinct right now is to write too much, I feel an odd need to run down the history of the characters, the creators, the publisher and my personal history with the book. Trust me, the posts you see are nothing compared to the first drafts that make the screen, much less the zeroth drafts in my head.  I'll probably settle down a bit after a while, to just a quick comment on each book. Longer than a tweet, but not by much.
Also been trying to catch up a bit on some TV shows and movies. For a little while I've been mostly resorting to comfort watching, stuff I've been multiple times before that requires minimal attention. Got a huge backlog of available stuff to watch, as you might have seen on recent posts about THE PRISONER and BELGRAVIA. Expect more of those, but not exclusively British. Although I am almost done with TINKER TAILOR SOLDIER SPY, and have some DOCTOR WHO to watch. And could catch up on TASKMASTER. And have heard good things about THE IN-BETWEENERS. Okay, maybe exclusively British...
No comments:

THE EXCAVATOR by J. M. DeMatteis (with Vassilis Gogtzilas) 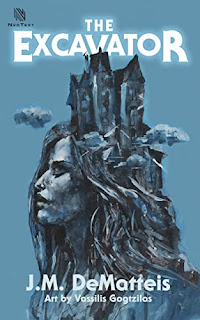 Hot off the digital press is THE EXCAVATOR, a new novella by J.M. DeMatteis, copiously illustrated by Vassilis Gogtzilas with a cover and ten interior illustrations. The pair previously collaborated on the AUGUSTA WIND comics.  Details on the new book, including many of the illustrations and a long sample, over on the publisher's site.
I've written more than once about my affection for many of DeMatteis' comics before, a field he's been prolific in for over four decades. His prose fiction is much more rare, with only the novel IMAGINALIS and the prose sections of ABADAZAD before this (both very enjoyable). While those were children's literature, heavily influenced by classic work by the likes of Lewis Carroll and L Frank Baum, this new one is definitely an adult story.
I highly recommend it, and it's a bargain at 99 cents (even better, included with Kindle Unlimited in Canada, not sure about other places). It moves fast, has a lot of twists, ends up in an interesting place and manages to put in a lot of emotional depth intertwined with the fantasy narrative.
Might spoil some stuff best discovered in reading after this point.
It begins very much like a classic TV anthology show, like the TWILIGHT ZONE (a show DeMatteis has some experience with), with the story of a woman who suddenly finds that all the memories of one of her children have vanished. This is disturbing enough, then she finds the memories are being held for ransom with the threat of more erasures, or excavations as the blackmailer calls them.
At this point I think I've got a handle on it, it's going to be a ZONE thing (or maybe BLACK MIRROR, with some early references to dark web crypto payments for the ransom). But then the FBI get involved, and it becomes more of a dark action/horror story, with hints of police procedurals. Then there are several more twists. Very well paced, and very well told in a visual manner as you'd expect from someone with as much comic book and screenplay experience as DeMatteis, every step of the way I could see this mentally as a comic book or as a movie. The Gogtzilas illustrations help with that as well, all moody and full of foreboding. I did have one little plot quibble still open at the end, but it was minor, and I may just have missed something.
It ends in a place where there could very much be further stories in this world (in fact, I wouldn't be surprised to one day see this adapted as the two-hour pilot to an EXCAVATOR series for one of the fifty streaming services available now). If there are, I'll be there for it.
1 comment: 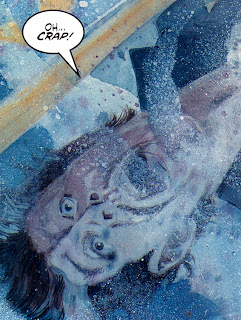 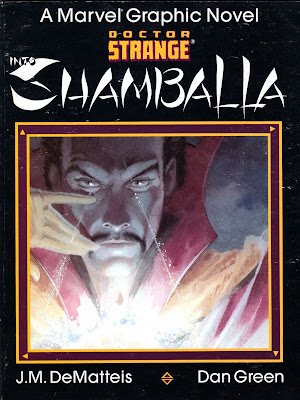 This book by Dan Green (writer/artist) and J. M. Dematteis (writer) featuring the Steve Ditko created character Doctor Strange.  It's part of Marvel's "graphic novel" line, launched in 1982. They'd stopped numbering the line shortly before this, but external numbering by release date puts it as #23 of 75 releases between 1982 and 1993.

DeMatteis had only written a fill-in for the character a few years earlier, but also wrote him extensively in DEFENDERS. He'd later have a short run on the regular series in 1995 and a DEFENDERS miniseries in 2005.  Green is mostly known as an inker, following some early 1970s full art jobs at DC, but he did pencil a few issues of DOCTOR STRANGE in 1983, as well as inking a Gene Colan run on the book before that.

I'll admit, the first time I read this book, maybe 25 years ago, I didn't care for it that much. It's told in an odd way, mostly through captions presenting a second person narration directly addressing Doctor Strange, lettered in an elaborate calligraphy by Ken Bruzenak (back before computer lettering was common, so presumably done by hand), with minimal dialogue. I recall it all seemed very pretty but more than a little pretentious. 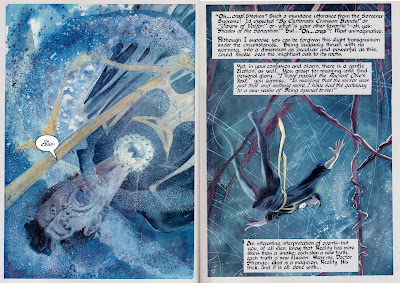 I liked it much more this time around, maybe because I've read a lot more DeMatteis comics in that time, so I'm more used to his rhythms. I really had to slow down a bit reading it from my instinctive speed. I found it helped to read it out loud. Slowing down also helps to appreciate Green's artwork, which is way ahead of its time for fully painted super-hero artwork. Just lovely stuff when you take the time to appreciate it.

Overall it's an interesting interpretation of Strange, sent on a mission around the world to complete a spell at the behest of his deceased master. Not sure it's exactly in line with how I see the character, but I think it's a valid version. I remember being not entirely satisfied with his short 1990s run on the character, I'll have to try it again some day (I think it makes a brief reference to this story).

DeMatteis was interviewed for an Italian reprint of the story, posted here. The story's never been reprinted in English, but Marvel has of late taken to incorporating their "graphic novel" line in the appropriate place in their chronological Epic reprints, so this will probably be in one of those within a few years.