Caught the first episode of the new Aaron Sorkin created TV show STUDIO 60 ON THE SUNSET STRIP, the only new TV show of the season I was really looking forward to (the US debut is later tonight, but the Canadian channel shows it on Sunday). I'm a big fan of Sorkin's previous shows, SPORTS NIGHT and THE WEST WING (which really got worse after he left), and this new one is sort of right in the middle of those two. Backstage at a TV show again, this time a live sketch comedy show which is nothing like SATURDAY NIGHT LIVE (it's on Friday night), but this time a one-hour drama instead of a sitcom, and bringing over a few regulars from WEST WING.

Good start so far, with the two main characters, the writer/producer team brought back in to rescue the show after the creator doing a NETWORK on live TV, being set up well in the first episode, complete with a lot of hints at the background and baggage that'll lead to interesting plot complications down the line, as well as a good solid grounding of what their relationship to each other is, which is where a show like this will stand. Also a good large cast with a lot of talent and potential (a few I'm not sold on, in particular the people playing the network higher-ups, and it'll be hard enough for the show to justify having network higher-ups involved in the day-to-day production of the show). Mostly it's good to hear some real Sorkin dialogue again, as opposed to the pale shadow of it that most of the last few years of THE WEST WING provided.

Well worth checking out.
No comments:

Yeah, I know I'm behind on this and most other things. Anyway, kind of slim pickings for this group of solicitations, especially considering half this stuff I probably won't buy right away, since I already have most of the contents in some other form. Still, some good stuff. Book of the month, surprise of the month and cover of the month is to the unexpected reappearance of RAGMOP. 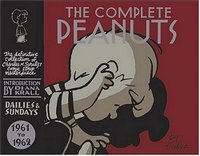 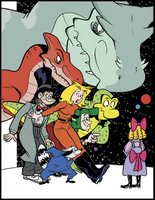 Some early EC horror from Feldstein, with Feldstein showing some of his plotting inspiration with a copy of Poe's "The Tell-Tale Heart" with a skull and candle on the splash page. This is the story of Doctor Hellman, a surgeon who had lost the love his fiancee Virginia to a talented pianist. For some reason, when the pianist cuts his hand, Virginia takes him to her ex for treatment. The Doctor decides the best thing to do would be to take revenge and amputate the hand, leading to the suicides of both the pianist and Virginia (both mentioned in a rather off-hand way in the captions). Hellman goes off to a cabin to forget the whole sorry mess, but finds a package with the amputated hand, which of course attacks him. 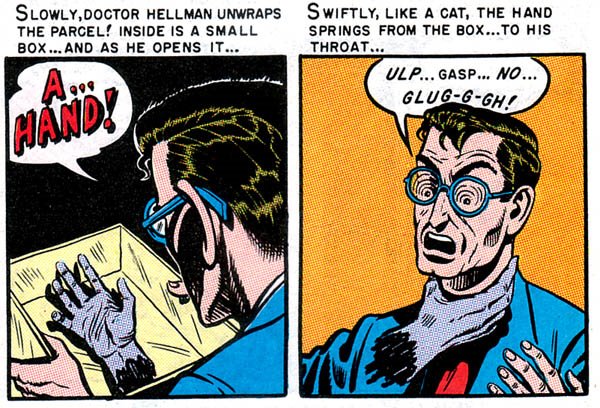 Hate it when that happens. Anyway, Hellman struggles in vain against the hand, finding that trying to burn it or lock it out don't work. Eventually he's choked by the hand, but when his body is discovered there's no hand, and it was all a product of his guilty mind. Hey, just like in that Poe story!
No comments: