THE LIVES OF SACCO AND VANZETTI by Rick Geary 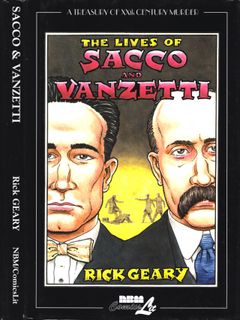 Rick Geary has carved out an interesting niche for himself in comics, building up a library of true crime books, starting in 1987 with A TREASURY OF VICTORIAN MURDER (looking at three cases), continuing with the Victorian era in 1995 with JACK THE RIPPER and then seven more books focusing on individual cases until 2007, and then moving on to the next century with THE LINDBERGH CHILD in 2008 and subsequent books.  The 2011 release THE LIVES OF SACCO AND VANZETTI is thus the 13th overall book in the overall series, and the fourth with the "A Treasury of XXth Century Murder" banner.

For this installment, Geary looks at a 1920 armed robbery in Massachusetts that left two men dead,  and the subsequent arrest, conviction and 1927 execution of Nicola Sacco and Bartolomeo Vanzetti for the crimes. The case was very famous at the time, with quite a few people convinced the decision was a miscarriage of justice. I'm mostly familiar with it from the Woody Guthrie album BALLADS OF SACCO AND VANZETTI, which as you might expect falls squarely on the "miscarriage of justice" side.

Geary, as is his wont, takes a much more clinical look at the case, first presenting the armed robbery and subsequent police search that led to the arrest of Sacco and Vanzetti, then detailing the backgrounds of the two men from their births in Italy through their immigration to the US and involvement in radical anarchist politics before moving on to the trial, the long appeals process (and the questions about the trial process in Massachusetts that were raised there), the eventual execution and aftermath.

This was a very entertaining book, maybe my favourite of the series. It does a great job of evoking the era, outlining the issues involved and keeping it all a good read as well, and Geary's art has been consistently excellent for decades.