The Curious Incident of the Cut Artwork

Whatever one has learned, understands, knows or experienced, is one's personal intellectual property, private property and individual property. Some facts and truths are available as "public knowledge."

Other facts, truths and knowledge belong to the individual who possessed (owns) it and paid the price in time, effort and experience. It is his earned knowledge and intellectual and personal property.

"Ditko cuts his artwork. He was using some valuable classic artwork as a cutting board."

If you care about the kind of stuff I write about, you've probably heard that said. Sometimes in a matter of fact way, sometimes in more irresponsible ways ("I heard Ditko's cutting up all his Spider-Man artwork!!"). Some argue that it's his right to do so if he pleases, others use it as evidence that there's something wrong with Ditko. There's been idle speculation about his motives for years. But almost everyone starts with the premise that Ditko has cut his artwork. Among the people who don't accept that premise, the general belief seems to be that the story (as told by Greg Theakston) is a lie. Theakston's motive for telling such an odd lie never seems to be specified.

Is this a valid premise based on the evidence? Either Ditko used some of his artwork as a cutting board or Theakston lied about it?

Let's step back and take a look.

The story has been around for over a decade. I don't know where I first heard it, but probably the most widespread telling was in this account that appeared in Wizard Magazine in 2002. Transcription copied from here, not independently verified. Please read this carefully.

Take for example, one of [Comic publisher and restorer, Greg] Theakston’s last visits to Ditko’s studio. While embroiled in a conversation, the historian noticed a piece of illustration board leaning up against a wall, slashed to pieces.

“He’d been using it as a cutting board,” Theakston said. “I looked a little bit closer and I detected a comics code stamp on it.”

He asked Ditko to turn the board around, a request met with a deadening gaze from the artist.

“I didn’t think he was going to do it,” the historian recounted. “It looked like a ‘Screw you’ look.”

Slowly, however, Ditko reached out and flipped over the board. It was a page of original art from a late 1950s issue of Journey Into Mystery, a splash featuring a hard helmet diver. Theakston couldn’t believe it. Not only was Ditko not displaying, preserving or prizing this piece of original art, he was using it as a cutting board.

Theakston quickly offered Ditko a deal: “Steve, I will go down to the nearest art supply store and buy you a cutting board that will mend itself-a plastic cutting board that’s so smart that when you cut on it, it mends itself-and you’ll have the finest cutting board on the block.” “Nope,” Ditko replied, twisting the artwork-turned-cutting-board back around.

Theakston pleaded. “Steve, geez. That’s worth a fair amount of money. At the very least-damn, Steve-it’s an artifact. It’s an important piece of publishing history in terms of comics.”

The artist turned and pointed to the drapery-obscured window next to Theakston’s chair. “Lift that curtain up,” he said.

The curtain, the historian estimated, was about 18 inches off the floor. He pulled the drape aside and saw a stack of original artwork from Marvel standing roughly a foot-and-a-half high.

“Can I look at these?” Theakston excitedly asked.

The writer was dumbfounded. “I was sitting next to a hundred thousand, two hundred thousand dollars, maybe, worth of Ditko artwork and he was cutting it up without letting people look at it.”


Did you catch it? Probably not. I'll get there. For the record, Greg Theakston has confirmed that the page in question is actually from a Charlton comic, THIS MAGAZINE IS HAUNTED #16 [1958], not Marvel's JOURNEY INTO MYSTERY (and thanks to the various people who helped to find it). A minor point, true, but a good lesson to not believe everything you read. Let's take a look at the alleged victim. 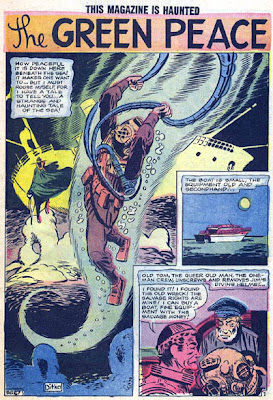 A nice enough page, but I can see why it needed to die.

Just kidding. Man, can that dude draw. Read "The Green Peace" here, by the way.

Okay, so back to the story. I want to make this clear. The artwork was standing against a wall with cut marks on the back. Nowhere in that story does Greg Theakston say that he witnessed Ditko, knife in hand, cut the artwork. No direct account from Greg I have read has ever stated that. Unless Greg comes out now and says he did see that, anyone who reports the story as "Theakston saw Ditko using art as a cutting board" is wrong.

Minor point? Not really. Because I'm going to ask you to read the story again, and notice that at no point does Greg say that Ditko says he was using the artwork as a cutting board. From what I see, it's something Greg assumed, and then spoke from the premise he assumed.

But, you ask, surely Ditko would have corrected Theakston if he was wrong? To that I say, you haven't read that much about Ditko, have you? Not volunteering information is entirely consistent with Ditko's behaviour. Now is the time to go back to the quote that opens this article and figure out why it's there.

Now, I've chosen not to run this theory by Greg before posting, but he's welcome to confirm if Ditko ever acknowledged using the artwork as a cutting board, or just let Greg assume he had.

Okay, now you ask, the artwork was still cut, how do you explain that? Honestly, I don't even want to try. Accidents happen. I cut my finger cutting some onions once. Doesn't mean I don't value at least nine of the little darlings (sometimes that left middle finger bugs me). I once spilled water on some comics, including a comic book I love more than half my family (fortunately not an expensive one to replace).

And one explanation, the one I believe pending further evidence? This was actually easier to make when I thought it was Marvel art, but it works almost as well for Charlton. Those companies, if you'll pardon my language, treated the artwork like shit for decades. They weren't housing the artwork in archival conditions. Professional archivists probably weep when they hear about how the art was treated. Besides the most valuable work being stolen, there are multiple stories of the artwork being deliberately damaged (especially in the Marvel warehouse). Reportedly some of the fraction of his artwork Kirby got back was ripped in half. Steve Bissette has talked about getting new artwork back with a "hole the size of a quarter punched through the dead center" of two pages. If you see a damaged page of artwork, why assume the damage was done by the artist, when it was the company that had physical possession of the artwork for over 90% of the time since it was created.

Or maybe he was using the art as a cutting board, as is entirely his right. Certainly I feel he has more right to do that than people who own Ditko artwork of questionable provenance (a polite way of saying "stolen artwork") have to own that work. My point is not to "prove what happened", it's to show that we don't know what happened, and it turns out we know much less than we thought we did, and when you step back and look at all the facts, strip away assumptions, you might find you can come up with a theory that has fewer contradictions, does not require assuming someone is crazy or someone is lying and just fits the facts better.

So believe what you want to believe, but if I've put even a hint of doubt in your mind, next time you hear the "fact" that Ditko cuts his artwork, politely point out that that might not be true, direct people to this page. At the worst they'll get to see a really good page of Ditko art.

So, this is my theory, which belongs to me.