THE PUMA BLUES by Murphy & Zulli 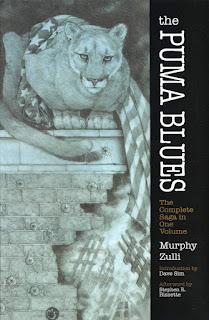 THE PUMA BLUES was a comic book created by Stephen Murphy and Michael Zulli, originally published from 1986 to 1989, leaving off unfinished after 23 issues of what it appears was going to be at least 36 to tell the whole story. Mere weeks ago, THE PUMA BLUES - THE COMPLETE SAGA IN ONE VOLUME was published by Dover, collecting not only 485 pages of the main story from the original series (plus some extras), but also a new 40 page ending by Murphy and Zulli, something I'd long ago given up hope of ever seeing (for me personally the wait wasn't quite as long as it was for some, since I read the book through back issue purchases starting sometime in 1990, I think just after Zulli's THE SANDMAN #13 was published, quickly getting all of the issues, so it was still a 25 year wait for me).

The book is ostensibly a science fiction story, with the main narrative starting in the far off future world of the year 2000, where the star of the show, young Gavia Immer (scientific name for the common loon) is stationed by the army in the quarantined Quabbin Reservoir in Massachusetts, where among other things a species of flying manta rays have evolved, to great governmental curiosity. From this starting point we get all sorts of reflections on the environment, the nature of reality and human consciousness, conspiracy theories, alien visitations, the impending apocalypse and more. This is told in some very experimental ways, including one issue which is mostly following a puma around the reservoir, with only pictures and sound effects, others which are mostly presentations of experimental documentaries made by Gavia's father and another issue where most of the text is an existential poem. So, y'know, not an easy book to read or describe, but an absolutely beautiful one to look at and experience.

I don't want to say too much about the ending just yet, until more people have had a chance to read it, but I will say that it's mostly satisfying. Not completely, but a 40 page story to complete what would probably have been 260 or more pages was never going to be, and Murphy and Zulli are obviously in a completely different place now. There are a lot of elements in the new pages which couldn't have been in the original plans, references to real-world events of the last quarter century, and I'd be fascinated to know how much of the overall arc of the finale was in the original plans. It definitely gives you something to think about, whether you've been waiting decades for it or the whole 525-page work is new to you.

In addition to that 525-page main story, the collection also includes "Act of Faith,,,", a short 4-page story by Alan Moore, Stephen Bissette and Michael Zulli first published in #20, one page from a Murphy, Zulli and Bissette interlude story "Pause" from the same issue, a mini-comic "#24 1/2" by Murphy and Zulli, an introduction and pin-up by original publisher Dave Sim and an afterword by Bissette which gets into a lot of the comic book industry politics which overshadowed the last year of the book.

Anyway, worth picking up, and an absolute bargain at only US$30 SRP for a hardcover brick of a book. It's on the list of stuff I'll write more about if I ever get around to posting here more.

And hopefully if the book does well, the publisher (Dover) can be persuaded to do a PUMA BLUES COMPANION volume, with a complete cover gallery of Zulli's gorgeous full-colour covers, the complete "Pause" story and other miscellaneous stuff (I assume at least some work was done on #24 back in 1989, which would be interesting to see if it's available).