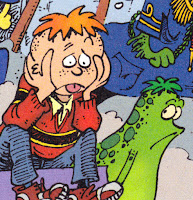 This was part of a 4-issue mini done by the long-running GROO creative team (Sergio Aragones, Mark Evanier, Stan Sakai and Tom Luth) between GROO minis in 2000.  The series is right what it says on the tin, the story of a touring circus travelling through space. In the first issue, on a repair stop on the backwater planet Earth, they accidentally pick up a stowaway, young Todd Cooper. 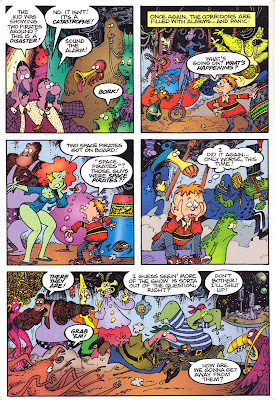 This time around, Todd tries to fit in with the circus, without much luck, and mistakenly helps some space pirates who have infiltrated the circus in a plan to steal the technology which will allow the pirates to invade "secured space".

A fun little issue by a well-oiled machine of a creative team. Aragones does some great fanciful designs of the various aliens, in particular on the centerfold which is a detailed  double page splash page of the circus in action. I think I'll re-read the whole series while I have it out.

In addition to the main story, Evanier writes a two page short story in the form of a diary entry by the gorilla-like character Grlx, although they accidentally included the wrong Aragones illustrations (the ones for this story appear in #3). As is typical for Aragones books in the past few decades the backcover is a wordless gag page.

Doesn't look like this was ever reprinted. Wouldn't mind seeing it in an omnibus book of the other non-Groo work by the the Groo-crew, including MAGNOR, THE BOOGEYMAN and a few one-shots.