Very sad to hear about the passing of Dennis O'Neil at age 81. O'Neil was a key creator in American comics going back to the mid-1960s, doing a lot of celebrated work in long stays as both writer and editor at DC and Marvel, as well as some early pseudonymous work at Charlton and a few other places. 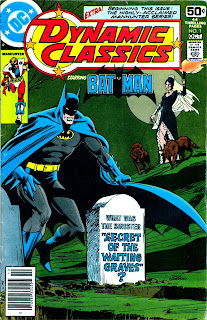 He was pretty prolific at DC in the late 1970s, so I probably read a bunch of his stories early on, but the first one I remember clearly was DYNAMIC CLASSICS #1 from 1978, a reprint title from the short-lived "DC Explosion" which ended up being a one-shot thanks to the subsequent "DC Implosion". It features a reprint of the 1970 story "Secret Of The Waiting Graves", the first solo Batman story O'Neil wrote, as well as his first collaboration with artist Neal Adams. By this time the O'Neil/Adams work had long been the template for the newer Batman stories I was reading, but the quality of this one, combined with the presentation in this series as a historically important story made it quite memorable. So did teaming it up with the first chapter of the Simonson/Goodwin Manhunter, man did this book make you want more, which sadly wasn't quickly forthcoming. 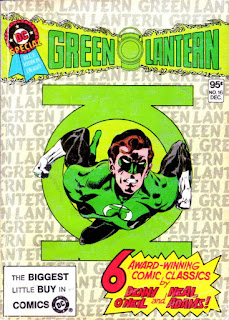 I probably next began to notice O'Neil's name on some of the digest comics I was buying from DC at the time. An O'Neil credited story would almost always be a highlight of any issue it appeared in. The most key of those was a collection of a good chunk of the O'Neil/Adams run on GREEN LANTERN from the early 1970s.  It was quite a rarity back then for the names of creators to be featured so prominently on the cover of an American super-hero comic, and the stories definitely lived up to the hype. 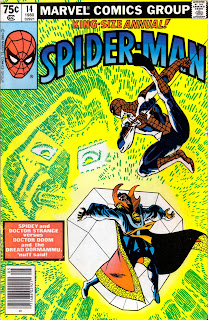 It was around this time that O'Neil moved over to Marvel for a while, and while I was more of a DC fan at the time, I do remember really liking some of the Spider-Man comics that O'Neil wrote in the early 1980s, especially a pair of annuals he did with Frank Miller, which I'd probably still rank as my favourite post-Ditko Spider-Man stories.
So among my early comics, those were among the ones I would re-read frequently, and I'd note O'Neil's name in any others I had, a GREEN LANTERN here, a WORLD'S FINEST there, and some editorial credits as well.  After I stopped buying comics for a few years when the newsstand sources dried up I finally started making regular trips to comic stores around 1988, and among the delights I found was that in the interim DC had graduated from digest reprints to their deluxe full-sized "Baxter paper" reprint line, and I was lucky enough to get most of the issues of GREEN LANTERN / GREEN ARROW reprinting the rest of those stories I sampled in the digest, in much better form, and all of THE SAGA OF RA'S AL GHUL, which scratched that longtime itch that DYNAMIC CLASSICS had given me (and as a bonus I also got the reprint of the Manhunter story in that series of reprints). Well, that pretty much made it clear I was a Dennis O'Neil fan. 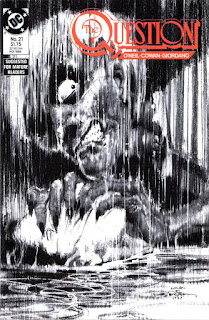 After a few months back in comics, I was mostly buying back issues, sampling some new releases, but nothing had really clicked as a regular on-going purchase yet. But with O'Neil on the brain his name really popped off the very striking cover to THE QUESTION #21. That clicked, instantly and completely. Tracking down all those earlier issues and making sure I got each new one made regular trips to the comic shop a requirement, and helped me find a lot more.
(I documented one of my many re-reads of THE QUESTION in an early series of posts on this weblog, including listing all of O'Neil's Recommended Reading List from the letter columns)
From there it just expands. Pretty soon I was also aware that O'Neil was the Batman editor of the time, as well as occasionally writing the character, and I was pretty all-in on the Batman books for a while. I also found out more about the past, and started picking up things like his 1980s DAREDEVIL run, some 1970s SUPERMAN issues with Curt Swan and a lot more. As reprints shifted from single issues to actual books, I discovered even more of his earlier work, and there were so many little things to discover. And I loved a lot of his later work. I'll try to highlight a few of them in another post soon.
Anyway, Dennis O'Neil was undoubtedly my favourite writer in comics among those who don't draw their own stories, and close to the top even without that qualification. As you can see from this particular section of my collection, there's a lot to discover. 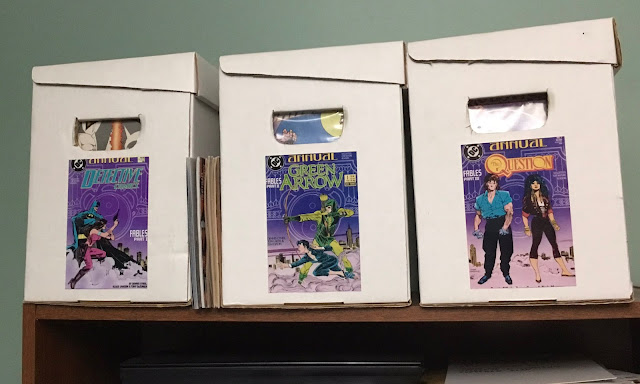