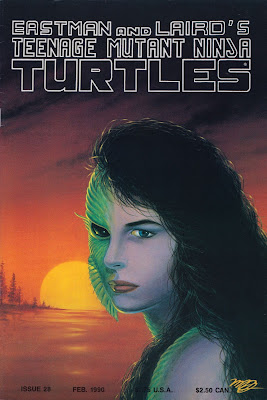 Teenage Mutant Ninja Turtles #28 [1990]
This issue features the story "Sons Of The Silent Age" by Jim Lawson and Stephen Murphy, with a cover by Michael Dooney.
It was published at one of the peaks of public interest in the Turtles, dated February 1990, which puts it just before the March release of the first live-action movie. Which makes it pretty impressive that creators Peter Laird and Kevin Eastman were publishing such unusual takes on the characters during this run of guest creators (while more familiar versions of the characters were published by Archie in the comics based on the color-coded cartoon).
For me my interest in the series was tweaked by the storyline done by Rick Veitch which ran from #24 to #26, coming right after Veitch's SWAMP THING storyline ended so abruptly. I had also just started reading THE PUMA BLUES, Murphy's series with Michael Zulli, shortly before this came out, so seeing his name in the credits was definitely intriguing (as were later issues which Zulli drew). 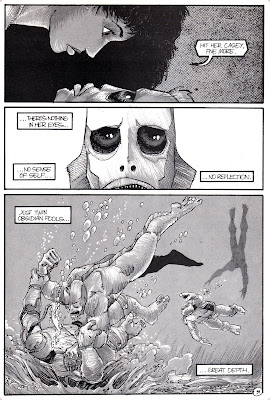 This story is much more contemplative than a book called TEENAGE MUTANT NINJA TURTLES has any right being. The Turtles take a raft trip with their friends April and Casey to unwind after some of the major recent events in their lives, including the death of their main enemy Shredder. Passing a nuclear plant, they find an injured female fish creature, who April attempts to save. The Turtles wind up fighting four male fish creatures, which fills the action quotient for the issue, but even that's subdued as it's accompanied by April's telepathic link with the dying female, instead of the usual wisecracks that you might expect from a TMNT fight scene. The finale has April having a revelation about one of the reasons for the Turtles being at loose ends.
Really a strong issue, making good use of the extra room to breath with the generous 44 pages given to the story. Lawson's art is especially strong. He really works well with the duo-shade toning used in the Turtles books.
I took a look at a colour reprint of this in one of the recent IDW books, and I have to say, do not recommend. Definitely see if you can find it in the original black and white.