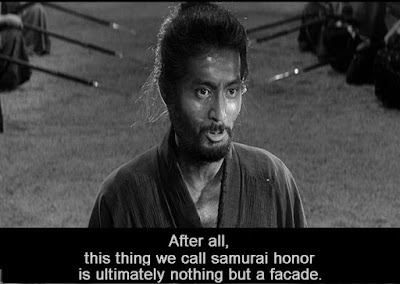 Harakiri (1962)
directed by Masaki Kobayashi
[aka Seppuku (1962),  切腹 (1962)]
Set in early 17th century Japan, a masterless samurai requests the use of a lord's courtyard to commit ritual suicide so he can die with honour. Flashbacks show what happened to a previous samurai who made that request and the connection between them.
Just an excellent film, one of the best I've seen in a while. I only became aware of it recently, when I did an update to my spreadsheet of movies I've seen and want to see, and it came up as the highest ranking movie on the IMDB Top 250 that I'd never seen (currently #32 and the only one in the top 50 I hadn't seen except for one I won't watch because of the director). That kind of surprised me, since I don't recall ever hearing of the movie before that, which is odd since I have at least some awareness of every other American or Japanese movie on that chart (not so much some of the Indian and European work. And of course the Japanese movie on that chart are mostly Kurosawa and Miyazaki). Looking into it, it appears it only got enough votes to qualify for that cart in the last year and a half.
Just about a perfect movie, with a gradual unveiling of all the secrets, some good action scenes that actually advance the plot and a thoughtful conclusion. Seeing this now I can see where a lot of the more interesting aspects of some samurai comics I like, from Lone Wolf to Usagi, come from. 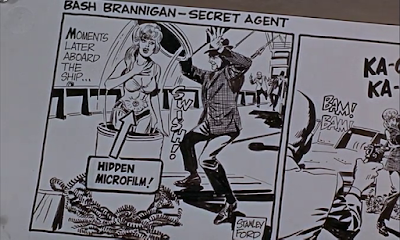 How to Murder Your Wife (1965)
directed by Richard Quine
It's kind of hard to figure out this movie. If it had come out in the last decade, I'd assume all the sexist stuff in it was a parody of the sexism of the 1960s, it's all so over the top in ways even beyond what you might see in Mad Men. But of course it's from the 1960s, so you have to allow for the idea that it might all just be sincere, no matter how ridiculous. Hard to say.
Anyway, it's the story of an absurdly successful comic strip artist (the comics shown being drawn by actual comic strip artist Mel Keefer), enjoying a carefree bachelor life, complete with a doting butler and carrying out elaborate roleplay scenarios on the streets of New York in order to get accurate photo references for his strips. Then he makes the mistake of getting married at a drunken party, and his carefree life is threatened (and his action/adventure comic strip becomes an even more successful domestic comedy strip).
It's all very silly, and very well made, especially with Jack Lemmon being very charming in the lead role. You have to either be willing to either ignore the sexism or be prepared to give it the benefit of the doubt that it was a parody. Not sure I'd really recommend it to anyone not also interested in the comic strip stuff (which I assume was why it ended up on my list of things to watch).

Also, had to check, and the score is indeed by the guy who did the Odd Couple, which is very distracting as the main recurring theme is about 90% of the Odd Couple theme, to the point you keep expecting Walter Matthau to pop in. 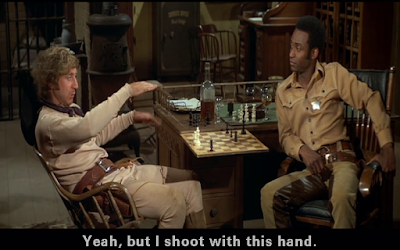 If I'd kept track, this might be a contender for the movie I've seen most in my life. Been a few years since the last time, but it still holds up. Even knowing every line to the point I'm saying every punchline just ahead of the actors (because my timing sucks).
And yes, all the criticisms of the language are valid, I'm not sure what someone who never saw it before would make of it today. Fortunately, not my concern at this point.
This time around I was especially amused by Gabby Johnson and his display of "authentic frontier gibberish". 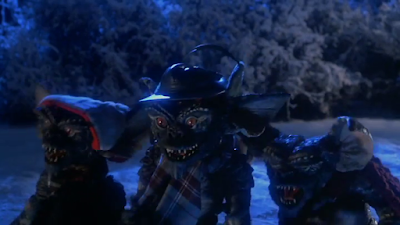 I know I saw this in the theatre first run, I think I've only seen commercial TV showings of it ever since, which I'm sure are cut to pieces (this film apparently being a leading reason the PG-13 rating was created). And even that would have been decades ago.
It's a strange movie, that's for sure. A few really funny scenes, a few really scary bits, but a lot of the scenes really go on far too long (the Gremlins in the bar, for example). And that absolutely weird scene where Phoebe Cates talks about the death of her father? What movie was that dropped in from? Maybe commercial TV has a point and it does need to be cut to pieces. Not so much for violence, but just for storytelling. There's a really good 70 minute movie in these 106 minutes. 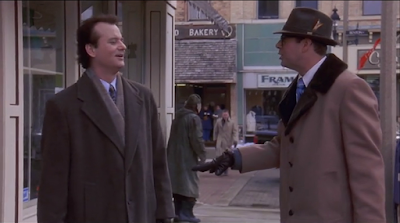 Another contender for most watched movie in my life. Don't think I've gone more than two years without seeing it since it came out (but, of course, never actually on February 2nd. I'm not a cliché).
I'm pretty sure there's nothing I could add to all the "hot takes" on the movie you can find with a casual web search for the movie. And where should you do that search? Where do you think?

Haven't seen this since it came out when I was hearing a lot about Woo, but his original Chinese movies weren't readily available to me.
It's about John Travolta as a fighter pilot who goes rogue and steals some nuclear bombs, and Christian Slater as his betrayed friend who has to stop him with the help of a park ranger played by Samantha Mathis.
I remember thinking it was okay, a little slight, but much more stylish than the average action movie of the era. Everything about it is better realized in Woo's next movie, FACE/OFF, also with Travolta. I'd still say this is worth watching. I was surprised by how clearly I remembered a few bits of it even after a quarter century. 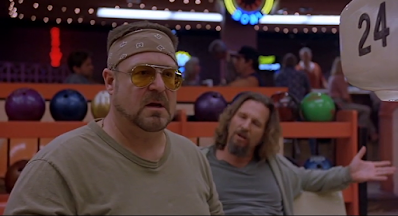 I mean, for comparison, I know it hasn't been that long since I last saw this one, maybe five years, and I seem to have forgotten vast chunks of it. I mean like most scenes where John Goodman isn't on the screen. The Goodman scenes all feel like I saw them last week, while everything else just seems like a half-remembered dream I had once.
Not to say it's not all enjoyable. But I look forward to seeing it all for the first time again in a few years. 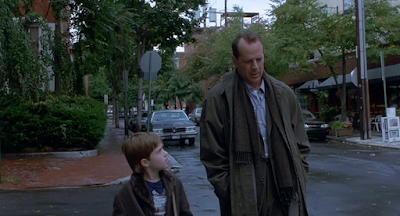 Saw this a lot back around the turn of the century. Twice in the theatre, twice again when it was released on home video (for the kids reading, it used to take at least 6 months, sometimes over a year, for a movie to be released for home viewing. Now it's more like weeks, if there's any delay at all. Or if there's even a theatrical release. Also, kids? Reading a weblog? In 2021? What's wrong with you?). And then again when I actually bought a copy maybe a year later (again, for the kids, we used to buy movies on physical discs). But all that was about 20 years ago, and this is the first I've seen it since.
For the most part, still works, not quite as well as I clearly thought back then, but still a good construction. There are a few places where it could have been tightened up, and the kid's story kind of ends in a weird place so they could jump to the big end scene with Bruce Willis. Which was a lot less elaborate that I remembered it being.
Still good enough to make you wonder what happened to Shyamalan. Easily twice as good as his next best movie, and way better than his average. 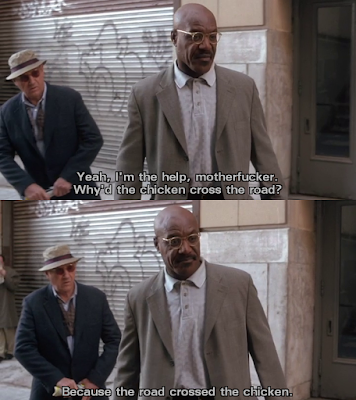 Somehow never watched this before. Anyway, it does what it says on the tin, it's a heist movie and it's by Mamet, with all the twists and dialogue ticks that you'd expect from that. Gene Hackman is the aging con-man looking to get out with lone last score, great cast of characters around him to either help or get in the way or be used.
Nothing revolutionary, but a decent example of the form. The big set-piece plane heist was well constructed, completely implausible and audacious.
The Mamet dialogue sometimes gets a bad rap, with so many trying to replicate the surface elements without doing as good a job, but in the right circumstances and with the right actors it can be a joy. 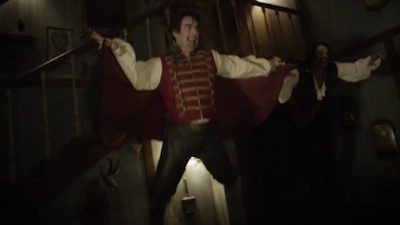 Been hearing some good things about the on-going TV show based on this movie, plus I loved Waititi's JOJO RABBIT and enjoyed his THOR: RAGNAROK. So figured it was worth checking out.
The movie is a mocking documentary (there's got to be a better name for that) about vampires living in modern day New Zealand, in particular four vampires from different eras (and different cinematic influences in their portrayal of vampires) who share a flat. Various hi-jinks ensue, mixing in standard sitcom situations with various horror tropes.
Pretty fun stuff overall. Kind of drags in the middle, even with the short 85 minute runtime. Might check out the TV show (which relocates the action to America).

Vivarium (2019)
directed by Lorcan Finnegan
A recent movie about Imogen Poots and Jesse Eisenberg as a young couple who go house-hunting, ending up in a suburban nightmare world of identical houses where they are unable to leave.
And I'm sure I'm not the first to note that this is basically a Twilight Zone episode blown up to feature length. Which is never a good idea. Even Twilight Zone episodes (any iteration) are better in the half-hour format, always feeling bloated and self-indulgent the closer they get to one hour, with commercials. Double that length, and take away the sweet release of a cartoon rabbit trying to sell you insurance, not a good idea. So some good bits, some striking visuals, but not enough story by half. Also, Eisenberg? Always a little annoying. Usually it fits the characters he's playing.