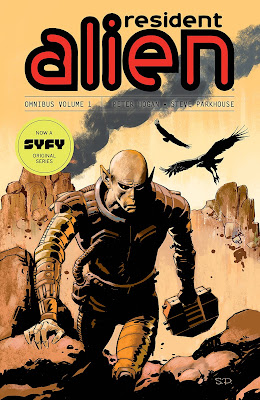 RESIDENT ALIEN has been a series that Steve Parkhouse and Peter Hogan have been putting out since 2012, with five 4-issue miniseries collected in individual volumes, with a sixth and possibly concluding 6-issue series currently being serialized and to be collected soon after.

It's also been recently adapted to a TV show, so with the extra attention on it from that it got a recent omnibus collection of the first three minis, with the balance presumably set for an eventual volume two.

The series is the story of Doctor Harry Vanderspiegle, a retired doctor living in seclusion until the murder of a local small town doctor in Patience, Washington presses him into service. Oh, and he's also an alien, stranded on Earth for the last three years waiting for rescue, with mental powers that allow him to make almost everyone see him as human. 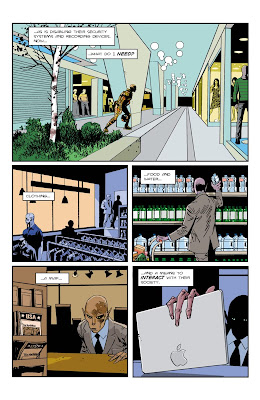 Along the way there are also brief flashbacks to his life before coming to Earth, the time right after his revival, and the ongoing FBI search for him, which had run cold until his new job brings him out into the open.

Fun little series, I’d read some of it before, but it definitely works better in one big solid chunk.  Parkhouse’s artwork is subtle and expressive, mostly dealing with realistic small town settings and characters in the Pacific northwest, with sudden splashes of fantasy/science-fiction fitting in seamlessly.

Looking forward to eventually reading the second half.