Curious case of the missing metal

Mike Sterling of Progressive Ruin fame is providing an invaluable service to comics with this new site, which reminded me of something I meant to post about.

A little while back I was looking for the last few issues of the Aparo/Barr (BATMAN AND) THE OUTSIDERS run I was missing, and came across this seemingly normal copy of #18 of the Baxter format series, nicely bagged and boarded. 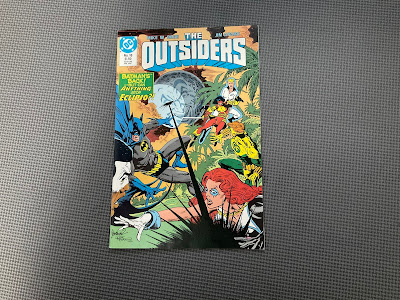 "I'll buy that for a dollar", I said, and proceeded to do so. Taking it home and opening it up, it seemed okay, until I started to leaf through it to admire the Jim Aparo artwork, and it started to fall apart. 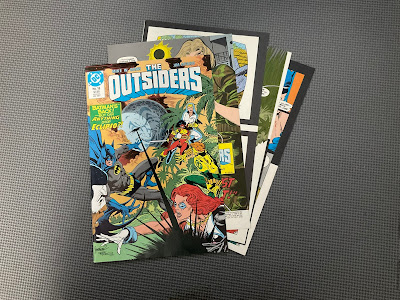 Which was odd, to see a book that was so sharp on the outside evidently had been manhandled enough through the years for the interior pages to be coming out.  But closer inspection revealed something much odder. 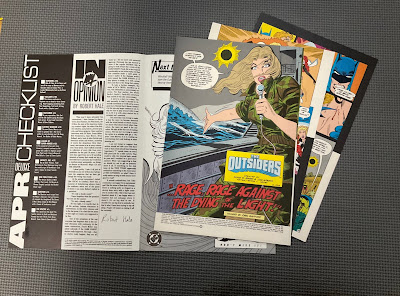 The comic had no staples at all. For a second I thought that someone had taken them out for some unknowable reason, but it was quickly evident that there had never been staples. 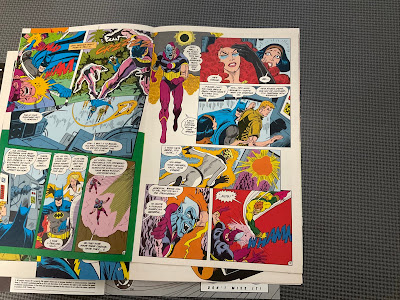 Not just not on the cover, but all the way through, right to the center spread.

Which, got to say, is pretty neat. I've seen an occasional one-staple comic, even a three staple comic, but never a no-staple (among comics meant to be stapled, of course). A few of the pages are stuck together with some light glue, which I guess is a pre-staple part of the binding process. It would be slightly neater if they were all loose, which would have been the case in other binding processes.

So, kind of cool to get a nice surprise like this when opening up a sealed comic you got, as opposed to the usual surprise you sometimes get of finding coupons cut out, whole pages missing, major tears on some pages, random writing or colouring or some other defect. I have occasionally come across books which were signed by one of the creators, but never anyone all that exciting, and even then I'm not really into autographed comics where I didn't meet the creator in person to get the autograph.

Also kind of neat to see a reunion of the CAMELOT 3000 team of Brian Bolland and Mike Barr on the backup (one of two such reunions I know of), and the odd artistic team of José Luis García-López and Jim Aparo on the cover.