THE AVENGING MIND by Steve Ditko 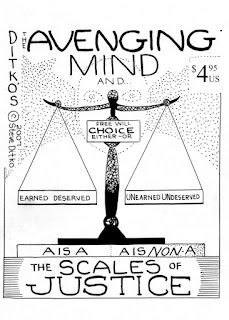 THE AVENGING MIND (ordering info here) is a recently published collection of essays and illustrations by Steve Ditko, published by Ditko and Robin Snyder, apparently their first publication of Ditko's work outside of his continuing contributions to Snyder's fanzine THE COMICS since the massive 240-page AVENGING WORLD collection of comics, illustrations and essays in 2002.

This publication is less imposing, weighing in at 36 pages, 26 of them text (10 essays, primarily about Stan Lee and the credits for the creation of Spider-Man) and 10 illustrated (all apparently new illustrations, except for two coming from Ditko's 1992 story "Lazlo's Hammer", oddly from the actual 1992 version, not the revised 2002 "Laszlo's Hammer").

If you're familiar with Ditko's past essay writing, you know what to expect. A kind of oblique style, frequent digressions into sometimes vaguely related analogies and a near constant relating of the issues at hand to the "A is A" philosophy that is central to much of his work, and seemingly his life, for the last few decades.

"Toyland" is the first essay, and is accompanied by the two pages reprinted from "Lazlo's Hammer". Unlike the other essays, it has less to do with the creation of the characters than it does their modern handling, as Ditko was apparently set off by comments by current Marvel editor-in-chief Joe Quesada in this convention panel report. Not surprisingly, Ditko is not impressed with the "These toys are meant to be broken" attitude of Quesada towards the "toys" that he had a hand in creating. He takes a long and not entirely clear way of saying it, and in fact he said it all a lot better years before Quesada ever said those words in the full "Laszlo's Hammer" story. While I have a great deal of sympathy for Ditko's views on this (and don't read very many modern Marvel comics as a result), I just wish instead of railing against such things at length he would go ahead and do some comics about the kind of heroes he thinks should be written about (but more on that later).

Which brings us to the main thrust of the book, Ditko's examination of what Stan Lee has said about their work together, and Ditko's specific objections to both the substance and the tone of what Lee says. That takes up some 20 pages of text and the next seven essays. While sometimes Ditko's style makes them rough going, there are some interesting historical facts and bits of insight buried within them. Some of these may be old news, since I haven't read all of the essays Ditko has written in the last few years.

"Roislecxe", being "Excelsior" in reverse, takes a look at a few choice quotes from the book Stan Lee co-wrote by that name. I haven't read the book, since I've long since found Lee's persona to be grating and his statements about history to be at best suspect and self-serving. The quotes that Ditko chooses to deconstruct back that up. I can't much blame Ditko for being upset at some of that, although when he breaks it down in such detail it begins to appear that he's looking for causes for offence (objecting to Lee referring to Spider-Man as "the webswinger").

"Creator or Co-Creator??" looks at Lee's definition of "creator" and what Ditko sees at some inherent contradictions in Lee's views expressed at various times and with reality.

"Creative Crediting" is about how Ditko feels that the printed credits on the comics of the early 1960s were misleading, implying to an outside observer that Lee did more than he actually did, since he never got a full script from Lee before drawing a story. Fair enough, although I don't see his model of a more honest credit, "A co-creation by writer, Stan Lee and artist Steve Ditko", as much of an improvement to how that hypothetical outsider would see the division of labour.

"He Giveth and He Taketh Away" turns the focus to Lee's tone in discussing these matters, in particular his joking manner, and how Ditko feels that the Lee uses various tricks to undermine what credit he does sometimes give to the artists he worked with. As I said, I've found Lee's persona an irritant for a long time now, and it's interesting to see Ditko's analysis of some aspects of that persona and his interpretation of the reasons for it. Also, a very interesting aside in this section, Ditko states that he drew the first Doctor Strange story on his own (plot and pencils), without any prior discussion with Lee on it. Of course we're all familiar with the Lee "'Twas Steve's idea" 1963 letter about Doctor Strange, but this is the first I recall reading Ditko's claim that the whole story was pencilled before Lee's involvement. A lot of potential follow up lines of enquiry seem to be called for based on Ditko's wording there.

"Lifting and the Lifter" turns to what appears to be a particular point of irritation for Ditko, Lee's claiming credit for the famous sequence in AMAZING SPIDER-MAN #33 where Spider-Man struggles to throw off the debris he's buried under, despite the fact that Ditko was plotting the book with no input from Lee for over 9 issues by that point. What I find most interesting about Ditko's recollections of that period is that Ditko always stresses the point that "Stan Lee chose not to communicate with me on anything". It's an interesting point to stress, especially since most accounts (presumably coloured by Lee's version of events) seem to imply the opposite.

"Revealing Styles" is more on Lee's tone, including Ditko's famous objection to Lee's use of the word "considered". As much sympathy as I have for Ditko's view, though, I have to say that current news shows that analogies to the Munich Accord and the 9/11 attacks might not be the best way to make a point about comic book history.

"Martin Goodman/Stan Lee" closes off this series, with a point that Ditko had been building up to for a while. It's hard to tell with him, but I think this is Ditko's attempt to make a reductio ad absurdum argument, that if you take Lee's positions at face value, Marvel publisher Martin Goodman has a more valid claim to "creator" credit than Lee.

Two more short essays follow. "They Are The..." seems to be about how Robin Snyder doesn't get enough positive feedback for publishing Ditko's essays, which I guess is fair enough, although I never got the impression that Snyder was in danger of not publishing them without more feedback, and Ditko is enigmatic enough that it's not exactly clear he wants feedback.

"The Mark and the Stain", I'm not completely sure what this is about, it seems to refer to people unnamed and events unrecounted. The underlying metaphor is rather vivid, which I liked, and it also seems that Ditko's not a big fan of zombie covers on recent Marvel comics, which is a cause I can get behind.

Now, the eight pages of new Ditko art, a bit of a mixed bag. A few of them are pretty much just variations of stuff Ditko has done better in the past, and others seem to be making straw man arguments (although with some nice art). There is one nicely designed, if historically questionable, cartoon with some cavemen and a dinosaur, which nicely pokes fun at Lee's definition of creation, and shows a sense of humour that Ditko would be well advised to integrate into his text more. The backcover shows a pair of new creations by Ditko, unnamed characters in the noble hero and pure villain mode, which it seems are planned for publication in a book later this year. News of more actual comics from Ditko is always good news.

Now, I've gone on about this book at length, mostly for my own future reference. Is it worth getting? It depends. A lot of it is frustrating, but worth it if you make your way though it all. Certainly Ditko has some interesting views, and it's welcome that he's somewhat more willing to engage in comics history than he has in the past. Not for everyone, but if you're curious than it probably is for you.

What's most frustrating is that, after reading all of this, I can't answer the simple question "What does Ditko want?", either because I'm too dense or Ditko is too oblique. Not that I think it would be in my power to give it to him, but you'd think publishing this thing there would be at least a clue to what he thinks the path to resolving this to his satisfaction would be. He tends to be dismissive of comics fandom as believing everything Stan Lee says, which I have to say is not my experience at all. Maybe it depends on who you talk to, but as I said I don't find Lee's act that amusing, and have long decided to take everything he says about his past and his collaborations as suspect. My general impression of other fans has been that they find his persona more charming than I do, especially those who have met him personally (I haven't, although I was once about three feet from him), but the suspicion about his accuracy is there to some degree in anyone with more than a casual knowledge/interest in the subject. The problem doesn't seem to be fandom swallowing Lee's version whole, but that Lee's version is all they've had for so long, and it's frankly pretty amazing that the view of Ditko as the co-creator of Spider-Man and Doctor Strange (and in the view of many the more important co-creator) manages to be as widespread as it is despite Ditko's prior refusal to engage the issue in a widely available forum (and his still enigmatic and round-about way of engaging in it now).

Well, anyway, this is too long by half, even with me mentally cutting out a lot of other stuff I wanted to say, and the odds of anyone getting all the way down here are slim. If you did, let me know and maybe we can discuss it further.