Bit overdue, I talked about ABADAZAD v1 over here and v2 over here.  A while after that it was revealed that Disney/Hyperion had cancelled the series, and further that they weren't even going to release the completed third book in North America, but did release it in the UK.  Yeah, I don't get it either... 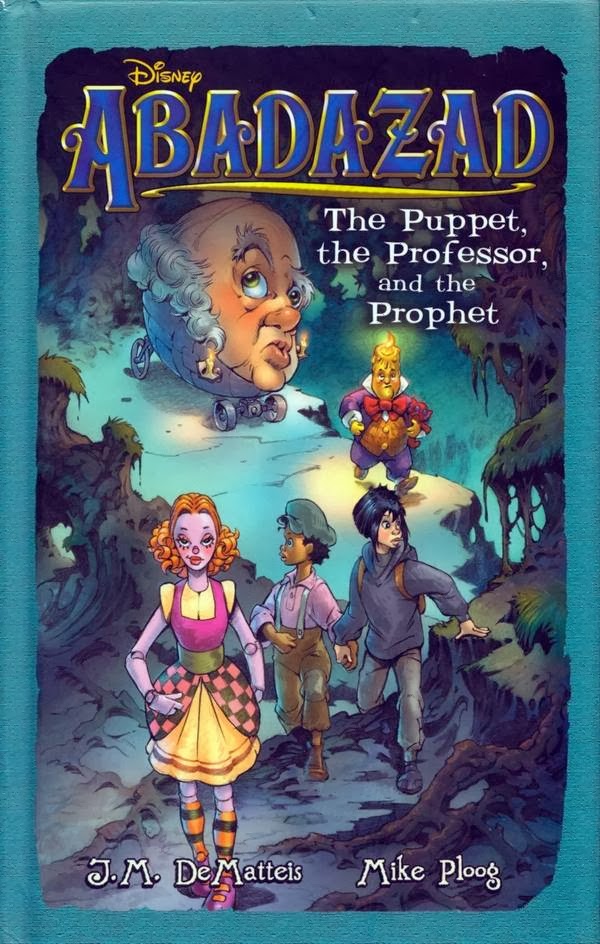 Anyway, a few times in the past few years I took a look to see if I could get the third book, but generally found that it was either ridiculously expensive, when shipping was added on (often even before shipping), or that the sellers wouldn't ship to Canada for some reason, or had a dodgey looking website that I didn't want to enter my credit card information on.  A few times I even found it for a reasonable price and ordered it, only to be told that there was an inventory error and the seller didn't actually have a copy, so money refunded.  So when I tried again a few weeks ago (after DeMatteis mentioned the series a few times on his blog), I didn't hold out much hope, so imagine my surprise when instead of an apology and a refund a package showed up with a copy of ABADAZAD v3: THE PUPPET, THE PROFESSOR AND THE PROPHET by J. M. DeMatteis and Mike Ploog.

For those unfamiliar with the history of the series, it began as a comic book series from rapidly failing publisher CrossGen back in 2004, only lasting three issues and barely getting into the story of Kate Jameson, a young girl who finds out that the world presented in the popular early 20th century series of Abadazad novels were inspired by a real place, one where she winds up in a search for her long-missing young brother.

The remains of the company were bought by Disney, which apparently only had a real interest in ABADAZAD (all they've done with the other books from CrossGen is license out some reprints to a third-rate publisher) and the series was reformatted to a series of books in a hybrid format, with sections of heavily illustrated text mixed with sections of comics, with eight books to tell the initial story.  Unfortunately, as mentioned above, it didn't get much further into the story than the original comics, especially in North America.  If you read the posts from DeMatteis's blog above, you'll get more details about what happened, and prospects for the future, including details about his related upcoming novel IMAGINALIS, about characters trapped in limbo.

For now, though, we (or at least I) have one new book to move the story along.  This third book essentially finishes up the first act of the story, the classic gathering of the characters for their quest.  It's a bit more than that, since this is a heavily meta-textual story, so it plays with the classic story structure in addition to following it.  By the end of the story we get Kate finally united with the group of characters who formed the core of the adventures in the fictitious original Abadazad novels, all quite different from their fictional counterparts.

It's a very enjoyable read, although the foreknowledge of the fate of the series kind of makes it somewhat bittersweet.  The contrast between the characters as Kate knows them from the novels and how they really are is always enjoyable, and there are a lot of twists that depend on the odd meta-textual format of the series (the story in this format is essentially presented as direct from Kate's enchanted diary, which includes scenes that she's not present for or didn't write about, but which she sees in the diary (as the comic book formatted pages), so she becomes aware of those events, even if she doesn't know if they're real or what they mean, and those inform her future actions).

Anyway, a good little book, and hopefully it finds a way to rise from the ashes once again.  In the meantime, I guess, into IMAGINALIS.

By the way, from a while back, the original series proposal by DeMatteis.  It's interesting to see how some parts of it were retained, but a lot of it changed in very major ways.  The end of the third books has a twist that was obviously going to have major implications on the final resolution but doesn't appear in the original proposal, and neither does one major character.

Also, Disney still has their way out-of-date website for the series up, which has some neat stuff. I don't know if I like the disneyfied animation in the opening screen, but it's interesting, and some of the other stuff is very nice.

Update: and here's an excerpt from the unpublished v4