Free Bissette lecture in one hour 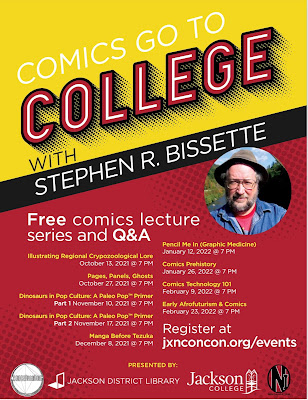 Coming up in one hour, and every other Wednesday at the same time until February 2022 (with a break for Christmas), Stephen R. Bissette is presenting a free on-line lecture series, "Comics Go To College" through Jackson College. Wide range of topics, including (no surprise) dinosaurs, early comics history, early Japanese comics, comics production, Afrofuturism and much more.
The first lecture is:
llustrating Regional Cryptozoological Lore, Wednesday, Oct. 13, 7 p.m.
Explore an illustrated overview of various approaches to depicting cryptids (ie. Big Foot, Yeti, Loch Ness Monster, etc.) via illustration. It will feature examples from the author’s own work with New England regional folklorist Joseph A. Citro (The Vermont Monster Guide).

Dates, times, descriptions and registration links (again, the lectures are free, but registration is required) are available at Jackson College's site for the lecture series.

If you can't be at a computer/tablet but do have access to a phone, the confirmation email will include options to join audio-only by a regular phone line, with plenty of international numbers available.

Coming up this Wednesday, and every other Wednesday until February 2022 (with a break for Christmas), Stephen R. Bissette is presenting a free on-line lecture series, "Comics Go To College" through Jackson College. Wide range of topics, including (no surprise) dinosaurs, early comics history, early Japanese comics, comics production, Afrofuturism and much more.

Dates, times, descriptions and registration links (again, the lectures are free, but registration is required) are available at Jackson College's site for the lecture series. 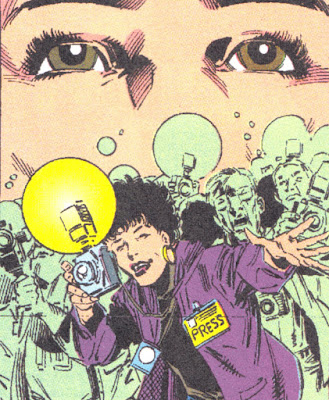 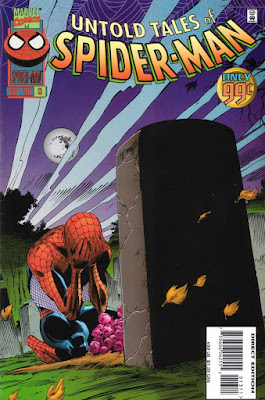 Untold Tales Of Spider-Man #13 [1996]
This book was part of a small line of 99¢ books Marvel did in the mid-1990s, back when most of their line was averaging $2 an issue. Most of those titles were pretty unappealing to me, as was most of the regular Spider-Man line at the time, but this book mostly worked for me, and I picked for the entire 25 issue run, plus two annuals and some other related books. In fact, I think this might be the last Marvel comic I bought brand new off the rack for more than a year of consecutive issues (there are a few later ones I bought as back issues following good word-of-mouth).
The basic concept of the title is that it tells stories that occur between issues, sometimes between panels, of the original Spider-Man comics done by his creator, Steve Ditko, back in the 1960s. It starts around the original AMAZING SPIDER-MAN #6 and runs to about AMAZING SPIDER-MAN #24. It uses the existing characters (sometimes using information that wouldn't be revealed about them for years, like a Mary Jane Watson story which takes place before she met Peter Parker), and also creates some new characters. A few new villains, a few new classmates for Peter Parker (at least some of them, I think, based on unnamed background characters Ditko drew in the original comics). The implanted stories aren't quite seamless with the original comics (more on that later) but are occasionally pretty clever. 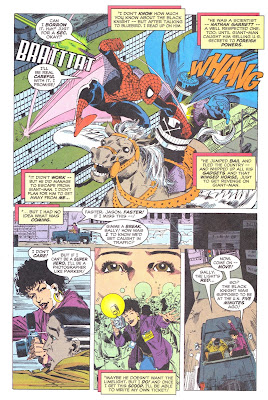 This issue is by the regular creative team for most of the run: Kurt Busiek story, Pat Olliffe pencils, Al Vey & Pam Eklund inks. The story this time revolves around one of the original characters, Sally Avril, a classmate of Peter Parker who has taken up a super-hero identity of her own, Bluebird. As we've found out over the last little while, she's pretty reckless, much to Spider-Man's chagrin, and that ultimately leads her to (spoiler alert, but there's a gravestone of the cover) die in this issue.
On its own, this is a pretty decent comic, but you can see why it doesn't work at all as a continuity implant. There is no way that Spider-Man, midway through the Ditko run, had a classmate who played at being a super-hero and died as a consequence. That's a bit harder to accept than some goofball new villain or an extra battle or two with Electro.
But, ignoring that, it's a pretty decent comic. It evokes the feel of the original comics while still in most ways being what passes for modern in the mid-1990s, but not in those regrettable ways you usually think of when people mention mid-1990s Marvel comics.
No comments: 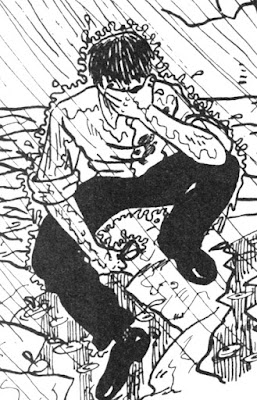 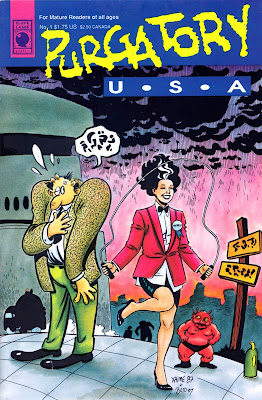 Bit of a strange duck here, with what was planned as the first issue of a series but became a one-shot. Despite the cover jam piece by Gilbert and Jaime Hernandez, this isn't a Love&Rockets spin-off, but an early book written and drawn by Ed Brubaker (credited as "Edwin" on the stories). Can't think of very many creator owned indy books that start off with a cover drawn by someone else entirely, and the actual creator not even named on the cover.

Brubaker sets the series in the fictional small town of Maynardville.  Brubaker does an introductory "Welcome To Maynardville" page introducing some of the characters and then three short stories. Two are standalone stories, "Chicken" and "A Minor Altercation", and the third is the first chapter of a projected 3-part story "The Rain". I'm pretty sure Brubaker never returned to Maynardville after this comic, and "The Rain" remains unfinished. He wrote and drew a few comics after, notably the series LOWLIFE, and then became primarily a writer. 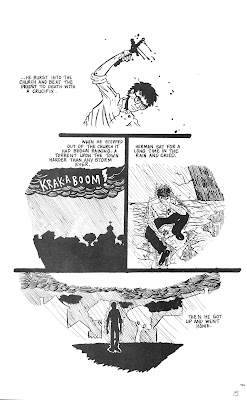 I remember kind of liking this when it came out. I was about a year back into comics buying at the time, and willing to sample almost anything, and I think had already found a few favourites among Slave Labor's books. Might even have seen a house ad for this in one of them (in fact, I'm almost certain I remember the tagline, "Between Heaven and Hell lies Purgatory USA"). I guess I was forgiving of the huge dissonance between the quality of the art on the cover and the insides. I know I'd casually look around for a second issue, and would have bought it if it came out, but wasn't so impressed that I was that interested in Brubaker's other work.

Anyway, "The Rain" had a pretty promising start. It's partially a history of the town, leading up to what happened to make Herman, a descendent of the town founder, leave the town years earlier, with a mystery about why he's now returning. It's all told in narration, what would be a Morgan Freeman type voice-over if it was a movie, no dialogue. I kind of wonder if Brubaker intended to continue that, or it was just for the intro. Still kind of intriguing, but having seen a lot more movies and read a lot more books than I had when I read it at age 19 I can now see it as being a bit derivative. And the art does look a lot like the work Chester Brown was doing at the time...

(most of it. A few places look a lot like Love&Rockets swipes, especially the female characters) 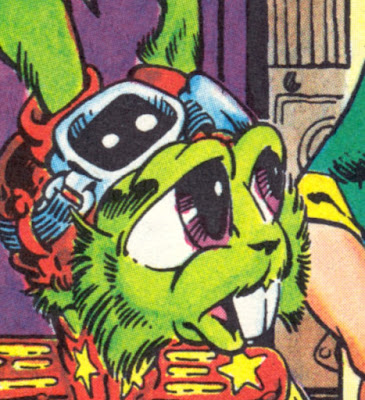 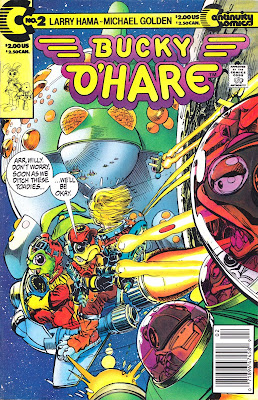 Bucky O'Hare #2 [1991]
Bucky O'Hare is a funny animal science fiction series created by Larry Hama and Michael Golden for the Continuity anthology ECHO OF FUTUREPAST back in 1984-1985. It features the titular rabbit captain of a spaceship with a crew of various other mammals from another dimension teaming up with a precocious human boy against an army of evil toads. It was collected in 1986. In 1991 it was adapted to a TV cartoon, and got a toyline, so Continuity repackaged the comics to a 5-issue series.
It's all a bit of a mess, unfortunately. The story is expanded to over twice as many pages, and the reformatting isn't very well done, even without any of the originals on hand to compare. The size of the lettering and line-weight of the art will vary from panel to panel, some of the transitions are awkward. And if your familiar with Continuity, you won't be surprised to hear that the colouring is overdone. 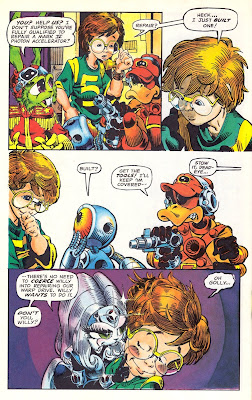 All a shame, since Golden's artwork, what you can make out of it, is really good, and there's some decent humour in Hama's writing. I'm not sure if there's ever been a decent modern reprint of it.  Looks like there was a black and white digest reprint back in 2006, which might be the reformatted version based on the page count, and a colouring book a few years ago which seems to have the full story, possibly in the original format, and some new material.
No comments: