Another Osamu Tezuka book on the schedule from Vertical in October, this time the very attractive 1950s work PRINCESS KNIGHT. Should be a quite a contrast with some of the bizarre 1970s material they've been publishing, like the imminent BOOK OF HUMAN INSECTS. Second volume follows quickly in December. 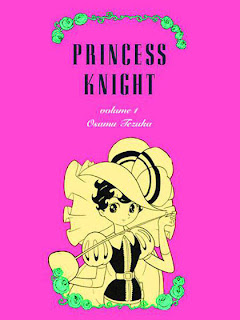 TEZUKA'S PRINCESS KNIGHT VOLUME 1 GN
by Osamu Tezuka
Set in a medieval fairy-tale backdrop, Princess Knight is the tale of a young princess named Sapphire who must pretend to be a male prince so she can inherit the throne. Women have long been prevented from taking the throne, but Sapphire is not discouraged and instead she fully accepts the role, becoming a dashing hero(ine) that the populous is proud of. The playful cartooning style is comparable to that of Disney, à la Snow White and the Seven Dwarfs. Considered by many as one of the first major shojo works, and one from the godfather of manga, Princess Knight has been long considered one of Tezuka's most popular works worldwide.
Softcover, 5x8, 384pgs, B&W $13.95
No comments:

On the legal news of the day...

Well, not good news on the legal front, as a judge handed down a summary ruling siding against the Jack Kirby heirs in their attempt to terminate the transfer of copyright on the characters Kirby created between 1958 and 1963 that were published by Marvel, including The Fantastic Four, Thor and Hulk. I don't have any legal expertise, so I don't pretend to understand all the legal issues involved, and my bias on the case is probably obvious. I imagine there'll be some type of appeal, which may reverse the whole thing, or at least let it get a full hearing in front of a jury. Despite what some people may say about judges dealing in facts, they very much do deal in opinion, they just happen to be opinions backed by the force of law. And as successful appeals and split Supreme Court verdicts repeatedly demonstrate, judges given the exact same evidence can come up with polar opposite decisions.

But there's no question that the latest decision, like many prior ones for similar cases, raises the hurdle for the side I favour in this case, and it may well be that the law as written isn't on the side of creator rights (from what I've read in the decision, this judge seems to think that, absent any supporting written contracts from the period, the onus should be on the Kirby estate to prove that the work was not work-for-hire as then defined, not on Marvel to prove that it was).  Sometimes, as a Mr. Dickens once wrote, "the law is a ass".  And as young Mr. Dylan observed almost fifty years ago, at the tail end of the period in question, it's the no-talent fools who make rules for the ones that got talent.  And as for "ones that ain't got any talent but think they do", well, 'nuff said.
6 comments: 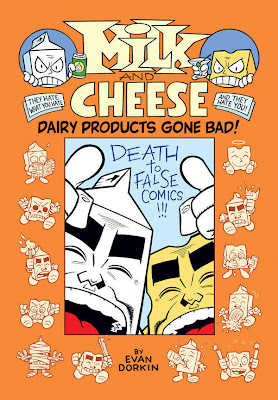 Pleasant surprise that Evan Dorkin is coming out with a comprehensive 240-page hardcover collection of his MILK & CHEESE series late this year from Dark Horse.  A great comic, one of my favourites of the 1990s, and it would be up there in the top 10 list of reprints for this already crowded with quality year, even before you get to all the great extras (see below) and the bargain $20 price.  Ordering code through comic stores is AUG110049.

Dorkin has some notes on what's going to be included over here.  Key bits:

- The book will feature over 80 pages of comics that have not been collected before.
- There will be a 24-pg color section featuring all the color M&C strips, a cover gallery, pin-ups, merchandise art, trading cards, etc.
- There will also be a 24-pg B&W supplemental section featuring pin-ups, t-shirt designs, and other art, etc.
- The book will include the rare 1997 M&C Special Edition 16-pg mini-comic featuring the expanded "Darth Vader Overdrive" strip and extras. 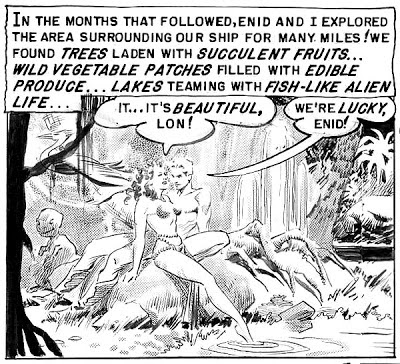 One of the best major publishing announcements in a while, Fantagraphics has announced that beginning next year they'll be publishing collections of the classic 1950s EC comics, with black and white hardcover collections with stories selected based on the creators, and then further subdivided by genre. The usual collection strategy for EC up to now has been to reprint the books by title, and for me this is a welcome change.  This is as close to my ideal EC reprint line as I could realistically expect.

The first four books announced are collections of Kurtzman written war stories (those he drew himself and a few drawn by non-regular EC artists like Gene Colan, Joe Kubert, Russ Heath, Alex Toth and Ric Estrada), Wallace Wood's suspense stories, Jack Davis's horror stories and Al Williamson's science fiction and fantasy stories.  A great mix, with four great creators (plus a sampling of some other big names in the Kurtzman book) and hitting all the major genres as well.  I'll definitely get all of those, and look forward to the future books (especially the Graham Ingels books).  At the size these books are, there's enough material for about 40 to 50 volumes, a good solid decade of publishing.
1 comment: 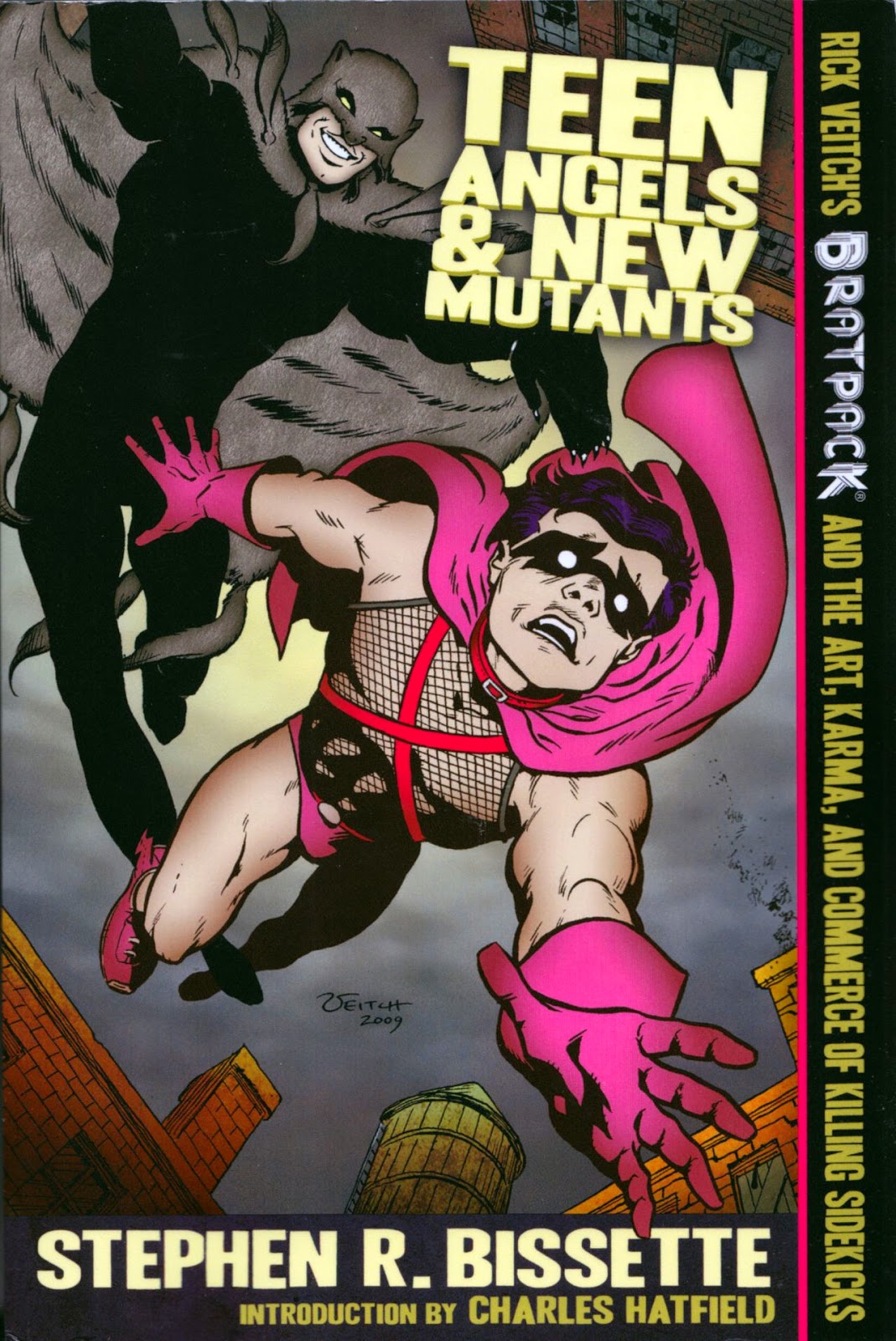 TEEN ANGELS & NEW MUTANTS is a recently published book by Stephen R. Bissette which examines in depth (as in 400 pages in depth) the early 1990s series BRAT PACK by Rick Veitch and later related works in Veitch's "King Hell Heroica" (which I discussed briefly over here after re-reading a few months ago prior to reading TEEN ANGELS).  The book began as a supplemental essay to appear in a planned but unrealized deluxe edition of BRAT PACK, but grew far beyond that as an independent publication.

Bissette places BRAT PACK in the middle of a web of historical contexts, tracing the strands further back than you'd expect, into some dark recesses of pop culture and history, and also tracing them forward into the present day and the types of work that have followed, either directly or as independent spawns of the zeitgeist it reflected. Bissette is probably uniquely qualified to author such a study, with an encyclopedic knowledge of the key aspects of pop culture threads (in particular exploitation cinema and comic book history) and a first-hand knowledge of the personal threads, thanks to his long personal and professional connections with Veitch.  That connection comes in especially useful in the most interesting aspect of the book to me, the long gestation and evolution period for the book, in particular a look at the initial proposals for the series and negotiations for it to be published by DC.

Overall it's a very enjoyable book for anyone interested in comics history, whether they've read BRAT PACK or not (though you definitely should). It's a fascinating read which will add dozens of movies and books to your list of what to watch and read and might make you look at some old favourites in a different light.

(for those who haven't read BRAT PACK, or need a refresher, an appendix helpfully supplies a synopsis of it and the rest of the Heroica, including notes on changes made between the original serialization and the subsequent collections.  You can also download a free PDF of the first issue here)

As you'd expect if you've read BRAT PACK, one of the major strands to trace involves comic book history, in particular the history of the teen side-kick in comics.  Bissette goes into that in depth, including several characters even I've never heard of before (some of whom, fortunately, are in the public domain so I should be able to check out a sample of their adventures when I have the time). The other major aspect of comic book history that Bissette explores is the controversy in 1950s comics embodied by Fredric Wertham and leading the the self-censoring of the industry via the Comics Code.  Bissette looks at the full range of Wertham's writing, both before and after his most famous work SEDUCTION OF THE INNOCENT, and presents an even-handed assessment of the Wertham's methodology, aims and conclusions that you don't always get from a more casual look at comics history.

In addition to comics history, the book also looks at the wider evolution of the teenager in pop culture iconography in the 20th century, with an emphasis on cinema. As you'd expect if you're familiar with Bissette's film writing, he doesn't restrict himself to the Hollywood mainstream (although that's all thoroughly covered), but includes key examples from international and underground works as well, examining key breakthroughs in those areas and how they paved the way for later mainstream exploitation of the same themes. There are also similar examinations of key works in prose, and most surprisingly to me were the extensive notes on the pop music industry and how the use and exploitation of teen and younger celebrities in that field echo the aspects of comic book culture that Veitch was parodying in BRAT PACK.

To me, the most fascinating thread that Bissette follows is the personal one, tracing Veitch's own journey in comics and how it informed the eventual creation of the "Heroica". As Bissette explains, Veitch has had a unique career trajectory which has very much made him a nexus of many of the key events in comic book history for the last few decades, with work in the undergrounds, breaking into the mainstream while one of the students in the first class of Joe Kubert's school, working on some of the first fully creator-owned books published by Marvel, then as one of the key creators in the innovative DC books of the 1980s which led to the creation of Vertigo, and then in the 1990s having a variety of roles in things like Tundra, the self-publishing movement and more.  Bissette was, of course, alongside Veitch for many of these events, either as an active participant or an observer, so he can speak about them as an insider, adding a lot of colour and detail to the events. Especially interesting is the look at the evolution of BRAT PACK, thanks to Bissette's examination of some early proposals and documents in the negotiations which almost led to it being published by DC's Piranha Press imprint. Of course Veitch's later problems with DC made that arrangement impossible, and very much informed how the series changed from those proposals.

Bissette absolutely makes the case for BRAT PACK as a major (and unfortunately under-rated) work, and uses it as a hook to examine many other interesting aspects of pop culture.  Hopefully this will be only the first of many books of comic book history and criticism that he publishes.

(Bissette also has a helpful page of supplemental information, ordering info, reviews and comments on the book over here)
No comments: