Steve Bissette has confirmed that writer Steve Perry has passed away.  You can read a lot more about his life and the unfortunate circumstances of his last days in other posts from Bissette.

I wasn't reading comics for most of the time that Perry was active in the 1980s, but I did end up with a good percentage of his non-animation related comics (Thundercats and Silverhawks, for which he wrote both cartoons and comics, were after my time, and I don't ever recall watching the shows, though it seems they do have some dedicated fans).  Most recently I picked up an issue of his most significant work, TIMESPIRITS, a few years ago, mostly for the Al Williamson guest art, and liked that enough to get the rest of the series shortly after.  That series deserves a more detailed look, which I'll try to get around to when, hopefully in the not-too-distant future, co-creator Tom Yeates is able to arrange a reprint.  In the meantime, here's a good discussion of it. 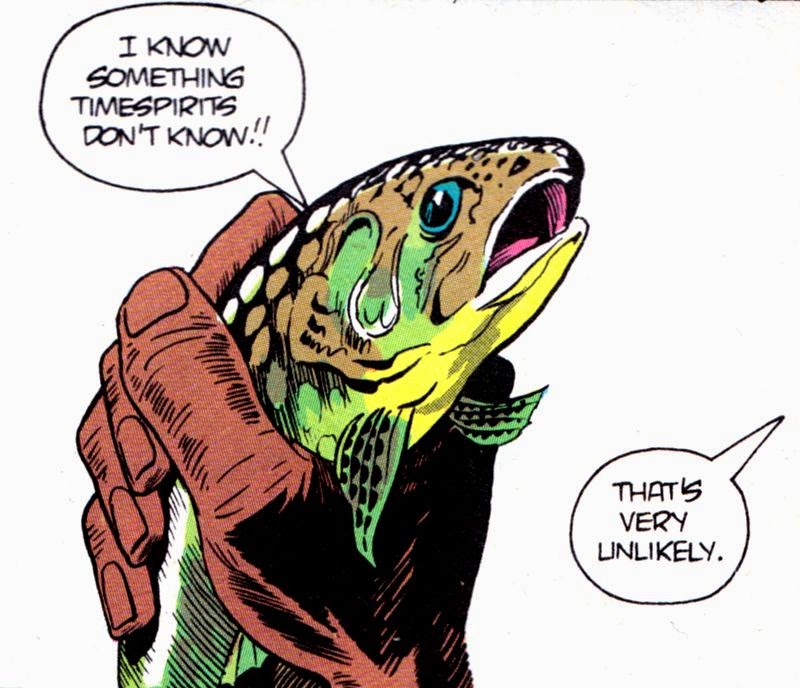 Outside of TIMESPIRITS my favourite Perry story is "The Saurian Remains", drawn by Steve Bissette and published in Marvel's AMAZING HIGH ADVENTURE #4 [1986].  A fictionalized fantasy story based on the "Bone Wars" rivalry among 19th century paleontologists, it's a cleverly done tale which provides a fanciful explanation for an old scientific error while also providing the opportunity for Bissette to draw both the dinosaurs and extreme violence that he excels in. 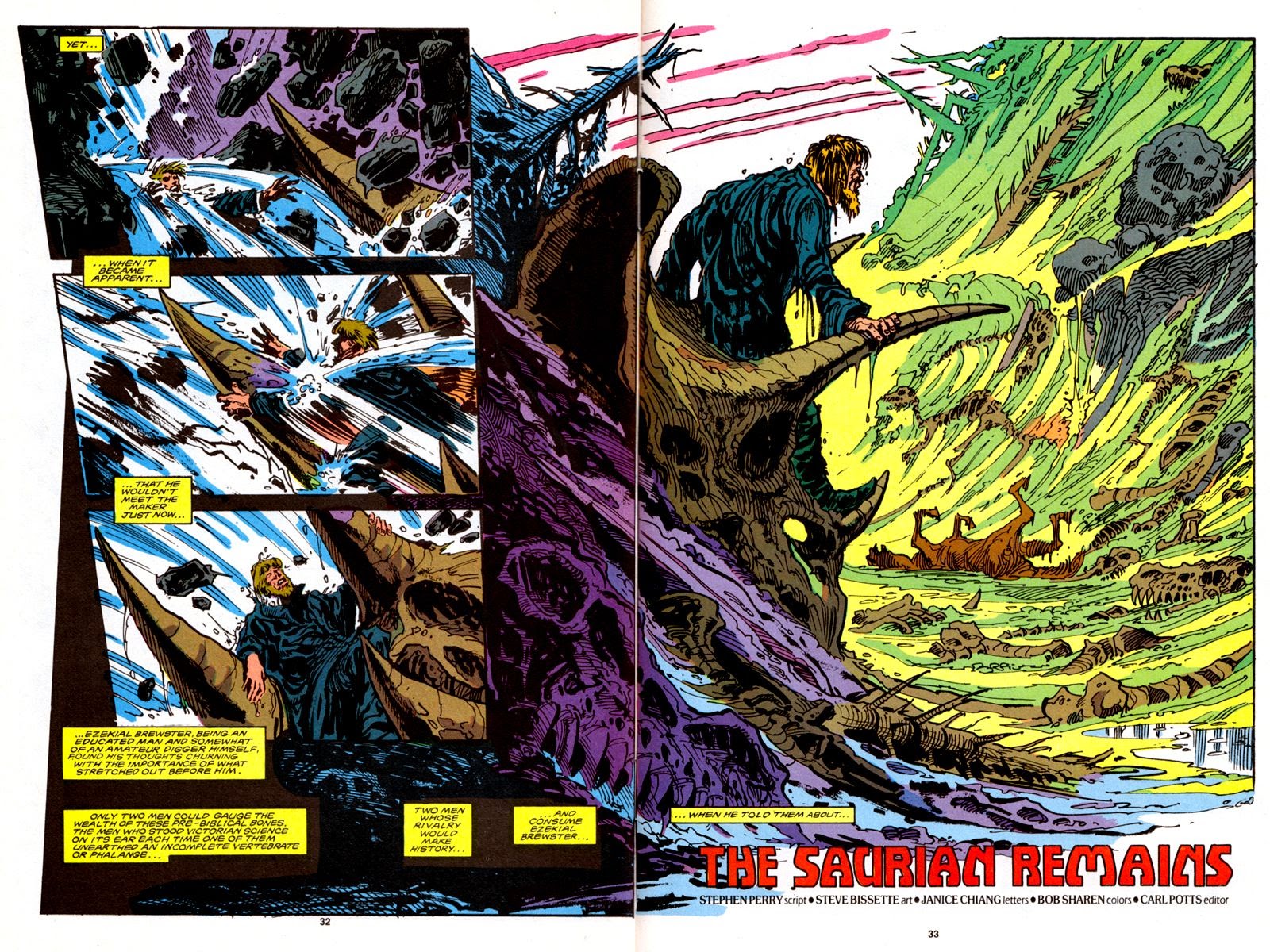 Perry and Bissette also did the memorable stories "A Frog Is A Frog" and "The Blood Bequest" (with John Totleben) for Marvel's BIZARRE ADVENTURES black and white magazine, as well as some stories in HEAVY METAL and EPIC ILLUSTRATED that I haven't read.

With Rick Veitch, Perry did the short story "Ahhh... Christmas" for Marvel's one-shot AMAZING ADVENTURES #1 [1988]. Not your typical warm holiday story, as you might gather from the line:

And what about the elves? I've always wondered about them. An exploited minority if ever there was one. Picture these undemanding little fellows jailed year round in some Arctic factory enslaved to the eccentricities of one slightly larger than themselves... 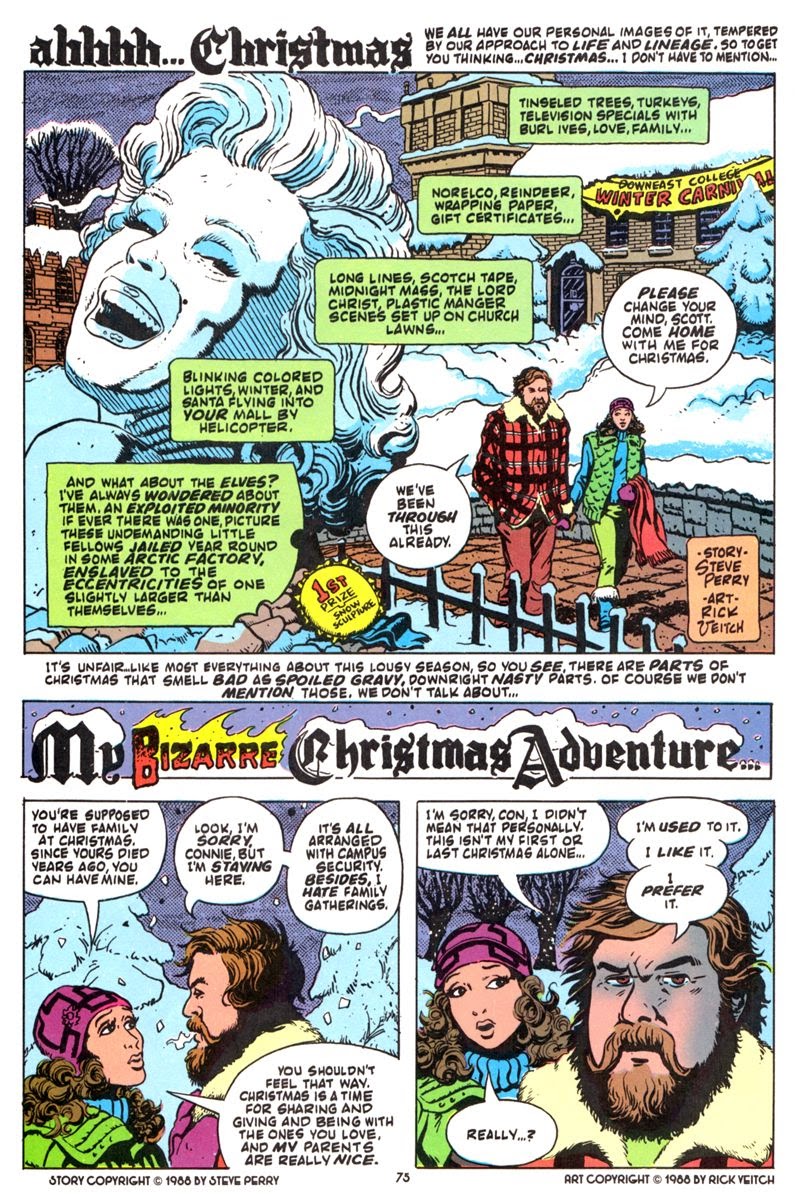 Perry wrote several stories for the brief revival of THUNDER AGENTS published by Deluxe Comics in the mid-1980s.  In the first issue, he wrote a story drawn by Keith Giffen featuring the new female Menthor, and then he did a 2-part story featuring the robotic NoMan in #3 and #4, with artwork by Steve Ditko and Greg Theakston.  This latter story was very entertaining as a modern take on a silver age concept (including a villain with the unlikely name Cyrano de Klopps), with several inventive uses of NoMan's powers.  Definitely one of the better non-Ditko-written Ditko stories of the era. 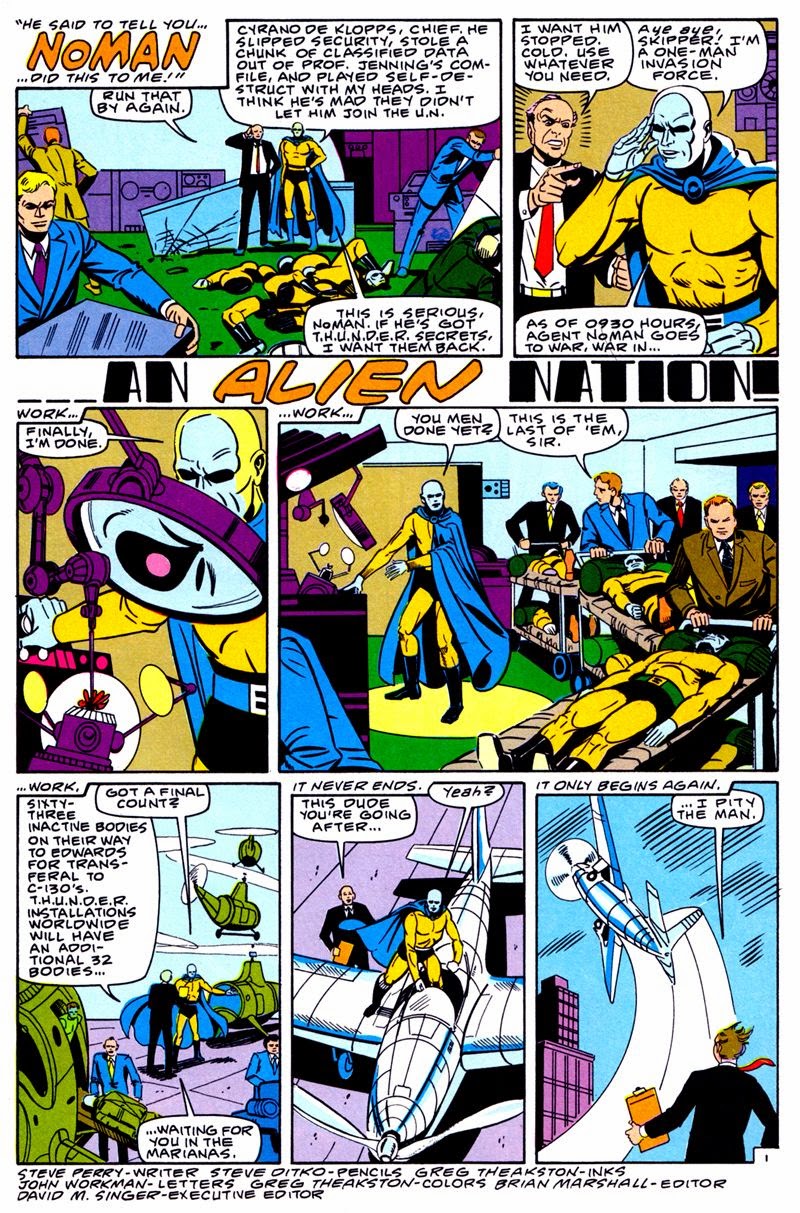 I picked up VANGUARD ILLUSTRATED #7 [1984], one of the last comics published by early independent publisher Pacific Comics, quite a while back for the first Mr. Monster story.  The anthology leads off with an entertaining western/horror story "The Ballad of Hardcase Bradley" drawn by George Evans.  I didn't remember that it was written by Steve Perry, but I remembered the story right away when Steve Bissette mentioned the title a few days ago. 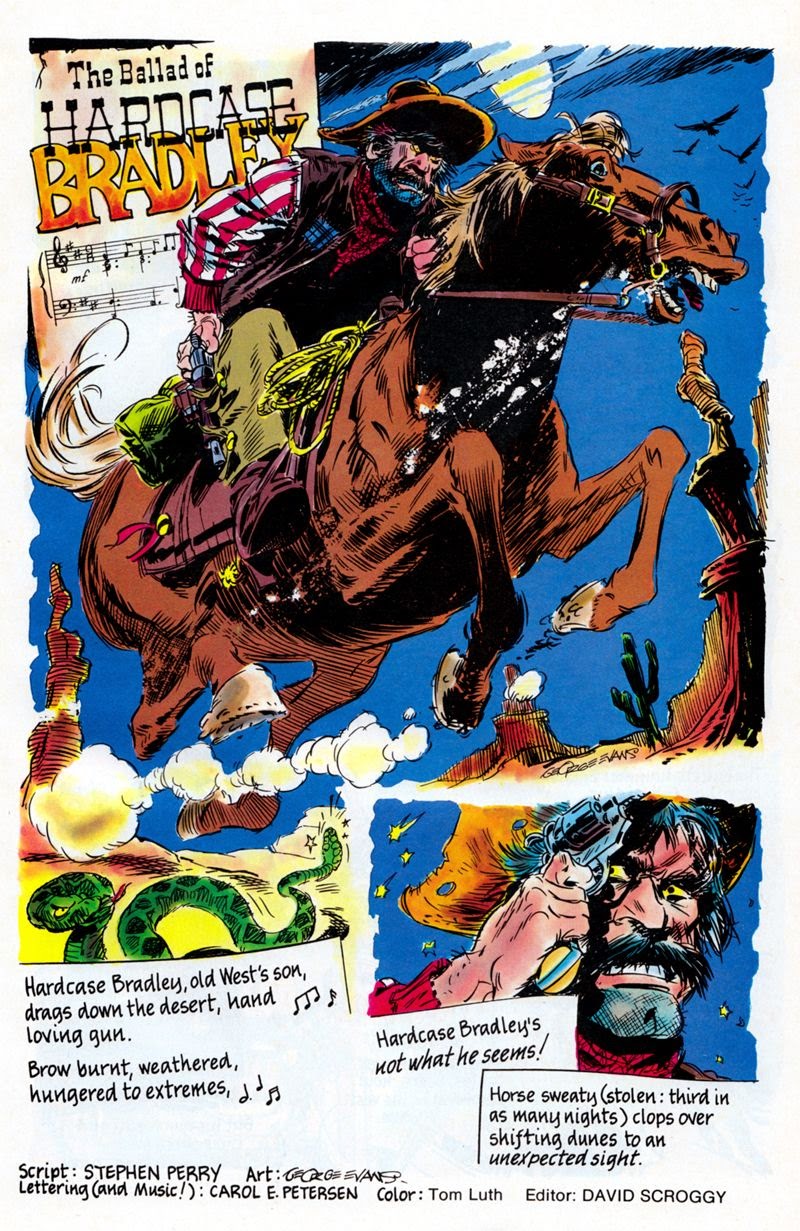 One of Perry's other major comic book works was a jungle adventure comic called SALIMBA, with art by Paul Chadwick.  I remember reading that, but can't seem to find it right now.  It was recently announced that About Comics had bought the rights to it, along with a new prose short story of the character, so it might return to print sooner or later.

Perry was helped in his last few months by the Hero Initiative. Consider a donation to them if you can.
1 comment:

Haven't paid too much attention to the solicitations for upcoming comics, except to note the Kirby and Ditko stuff, for the last few months.  Heard about a few things I'd missed recently, so I looked down the full lists, and here are some random things I thought were noteworthy, mostly for my own future reference.

As previously mentioned, I went to TCAF on Saturday at the Toronto Reference Library (a really nice place, by the way.  I used to go there all the time when I had more occasion to be downtown).  A very good show, I highly recommend heading down if you can whenever the next show is.

Met the main five guests who I wanted to see, and enjoyed taking to them all.

Heading down to TCAF

Preparing to go to the Toronto Comic Arts Festival (TCAF) this weekend.  Despite it, obviously, being in Toronto and me, not quite so obviously, also being in Toronto, I haven't attended the show before.  Should be interesting.  The main reason I'm going, of course, is the attendance of Larry Marder, of Beanworld fame.  He's giving a history of the Beanworld show on Saturday afternoon, so I'll definitely be there for that.

Looking down the full guest list, I don't recognize a lot of these names, but I've been kind of out of touch with new independent comics for a while now.

One name that jumps out is Charles Vess, whose work I've been reading for some twenty years or more.  Hell, my review of his BOOK OF BALLADS was the second ever post on this weblog, after a short introductory post.  I'll have to get that signed.  Maybe one of his old TALES OF ASGARD things.

And Evan Dorkin and Sarah Dyer both, that's pretty good.  I love all sorts of stuff they've done together and separately, MILK AND CHEESE, PIRATE CORPS, ACTION GIRL, SUPERMAN ADVENTURES.  Hm, I was thinking KID BLASTOFF would be a good thing to bring for signing, but it seems to be misfiled...

Good to see Jim Ottaviani on the guest list.  I have a bunch of his books about real-life science from GT Labs, starting with TWO-FISTED SCIENCE.  Think I might have missed a few of the more recent ones, so maybe I can catch up.

So that's a pretty good list of people to look up.  Depending on how long that takes and how long I feel like sticking around, I might also stop by and see a few of the other names I recognize who've done work I enjoyed, like Salgood Sam (SEA OF RED), Jim Rugg (STREET ANGEL), Roger Langridge (FRED THE CLOWN), James Sturm (GOLEM'S MIGHTY SWING), Paul Pope (100%) and some others, and see if I can spot anything unfamiliar which looks interesting.