A farewell to Sam Glanzman (1924 - 2017), an excellent comic book writer/artist with a career stretching back to his teen years and including numerous classics in various genres, plus casting a large shadow in his influence on later generations of artists.

I came to his work relatively late, as I didn't read too many of the DC war comics as a kid, when that was the primary place his work was published. As I started to get into them in reprints and back issues around 1990, I noticed that I really liked a lot of the short story back-ups from the 1970s, especially those that fell into two groups, "Robert Kanigher's Gallery of War" (with various artists, most frequently Ric Estrada) and "U.S.S. Stevens", written and drawn by Sam Glanzman. As my collecting expanded I became more familiar with a lot of Glanzman's past work, as well as the new work he continued to produce almost to the end of his life, although I've still only scratched the surface on his full body of work. 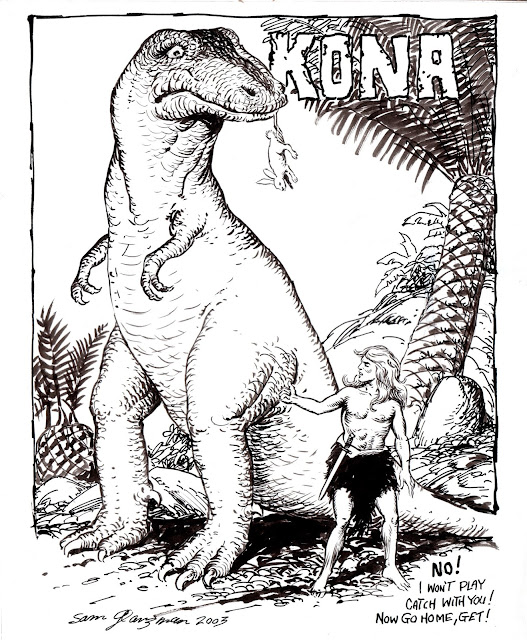 I also had the pleasure of meeting him once, and had a few brief e-mail encounters with him, and am happy to own a few original pieces by him, including the 2003 Kona sketch above. 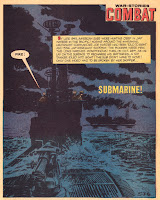 In the 1960s he worked primarily for Charlton and Dell. Notable work includes a lot of war comics for both companies, including most issues of Dell's COMBAT. Also for Dell, he did the full 21 issue run of KONA, MONARCH OF MONSTER ISLE, a sometimes bizarre but always exciting fantasy adventure book with some very innovative storytelling and character design. Two notable Charlton projects were HERCULES (with Joe Gill and others) and a short run on TARZAN which was produced under the mistaken impression that the character had lapsed into the public domain. One of the most notable features he did was an on-going WWII adventure "The Lonely War of Willie Schultz" with Will Franz (there was talk of Franz and Glanzman doing a conclusion to the story a few years back, anyone know if it was ever published?).

In 1970 Glanzman began working for DC, primarily on their war comics. The most notable are the 58 U.S.S. Stevens short stories he wrote and drew, most of them only 4 pages and published from 1970 to 1977. Based on his experiences on the ship during WWII, they provide a vivid and fascinating account, with a variety of storytelling styles. The stories range from the comedic to the tragic, look at the mundane aspects of life on board the ship, provide philosophical musings and describe many colourful characters.  In terms of volume, Glanzman's main work was on the Haunted Tank feature in G.I. COMBAT, taking over from co-creator Russ Heath in 1972, mostly working with co-creator Robert Kanigher (briefly with writer Archie Goodwin), until the cancellation of the feature in 1987, drawing over 200 stories. Just after that he drew two of the last issues of DC's flagship war book, SGT. ROCK, which are really nice. In addition to the war books, Glanzman also drew a number of fantasy/horror stories, writing a few of them, and also working with Sheldon Mayer on one interesting dual narrative story from 1972.

As the DC war books wrapped up in the 1980s, Glanzman began doing some work for Marvel, continuing the auto-biographical WWII stories with some short stories in SAVAGE TALES and two full length A SAILOR'S STORY books, as well as some stories by other writers in SEMPER FI' and THE 'NAM. He also wrote and drew a complex sci-fi adventure called ATTU (two books published in 1989/1990, the third finally included in a complete edition last year). He also worked as a strong inker on a few books, most notably over Tim Truman on three JONAH HEX stories written by Joe Lansdale for Vertigo and a few issues of TUROK. There were a lot of other projects, including working with Lansdale on the western RED RANGE (soon to be reprinted in colour), another western with James MacCormick called WEST OF THE DAKOTAS and an unfinished Robin Hood story with Roger Broughton called THIEF OF SHERWOOD. He also did a few more U.S.S. Stevens stories over the years, including those in JOE KUBERT PRESENTS.

Fortunately a lot of Glanzman's work was finally reprinted in the recent past (ATTU, A SAILOR'S STORY and U.S.S. STEVENS, with RED RANGE upcoming), thanks largely to Drew Ford, who has been raising some money lately to help with some expenses on Glanzman's final illness and publish a tribute book.
No comments: