You kids might not remember, but back in the mid-to-late 1980s there was a boom in the direct sales comic book market of black and white parody books, mostly attributable to the phenomenal success of the Laird and Eastman's Teenage Mutant Ninja Turtles. As you'd expect, the boom quickly led to a glut, with a lot of books of at best marginal quality crowding out anything with merit, and that led to a bust.

I missed seeing most of that first-hand, only getting back into comics around the time of the bust.  But I heard the tales, and in those tales one of the things you would hear is that among the books of the boom times one that did have merit was Mark Martin's Gnatrat.  Certainly Martin's other work made that easy to believe, so eventually I tracked down:

GNATRAT - THE DARK GNAT RETURNS [1986]
HAPPY BIRTHDAY, GNATRAT [1986]
DARERAT [1987]
THE ULTIMATE GNATRAT [1990] (collecting the above three with a lot of new pages, including the ending and a comic explaining the boom/glut/bust from Martin's perspective)
GNATRAT - THE MOVIE [1990]

Five publications from five different publishers.  As you can tell by the covers, the series is largely a Batman parody, with particular emphasis on Frank Miller's work, especially in the first book, and some of Miller's Daredevil/Elektra later, and the first Tim Burton directed Batman movie in the final comic. 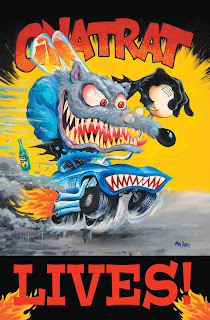 Anyway, all that is prelude to mentioning that, after two decades, Mark Martin returns from his Nascar career to his roots with the self-published Kickstarter supported one-shot GNATRAT LIVES (available now directly from Martin). This is a full-sized 48-page comic which includes the 24-page "Gnatrat Lives" story and the 24-page "Buddy Cop Comix", which is Martin's variation on a 24-hour comic (in this case 24 1-hour pages done over a few days).  With the covers that comes to 51-pages of Mark Martin in all.

The Gnatrat story picks up directly from the ending that appeared in THE ULTIMATE GNATRAT book, and is an enjoyable romp in the classic Gnatrat vein, with Martin's detailed artwork (which can probably be described as Walt Kelly crossed with Harvey Kurtzman, with a big injection of Ed "Big Daddy" Roth). In a clever move, the Kickstarter supporters of the book are listed in a four page sequence where each gets a minor character, each with a unique Mark Martin design, named after them, which really shows off Martin's skills.

The "Buddy Cop Comix" story has a much looser version of Martin's style, as you'd expect from a 24-hour comic, but it's also a fun little story, playing off all sorts of variations of the "buddy cop" formula, including parodies of MEN IN BLACK, X-FILES, ROBOCOP, TURNER AND HOOTCH, THE ODD COUPLE (via one of the TV leads other roles) and others. Also very enjoyable, with a lot of quick twists and clever connections and callbacks.

So two very fun full-length stories, well worth picking up a copy here.

[update, since I wrote this review Martin has announced publishing plans for the remainder of the story and other new material, plus another chance to be a character in the story.  See the link for details]
4 comments: 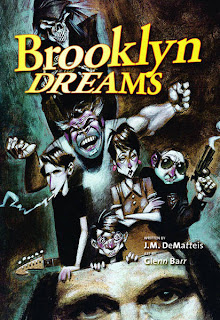 Despite the fact that I already own the book in its two prior formats, the original 4-volume serialization from 1995 and single volume 2003 softcover both from DC's Paradox Press in their digest format, I'm very tempted by the upcoming hardcover edition of BROOKLYN DREAMS by J.M. DeMatteis and Glenn Barr coming out from IDW in a few months. It's an enormously entertaining book that definitely stands up to and rewards multiple readings, and I'm sure I'll want to revisit it many times in the next few decades, so the more durable binding will be nice. And if that 6.625” x 10.187” trim size is correct, this will be considerably larger than the extant editions, which will make it much easier to read the tiny lettering and appreciate Barr's artwork.

The complete critically acclaimed saga is re-collected in hardcover for this collection of J.M. DeMatteis and Glenn Barr's Brooklyn Dreams. Celebrated by fans and critics alike, and long out of print, don't miss this chance to own a book that many say will change your life.
$39.99  384 pages  6.625” x 10.187”
2 comments:

Back when I used to post more frequently on this weblog, a regular feature was a series of posts about the EC comics of the 1950s.  A listing of those posts is over here (though it looks like some of the image links are broken). Anyway, with the recent news that we're finally going to get a series of EC reprints I can really get behind, creator/genre themed rather than full issue reprints, I thought I might restart them, and see how far I can get before the new reprints start. 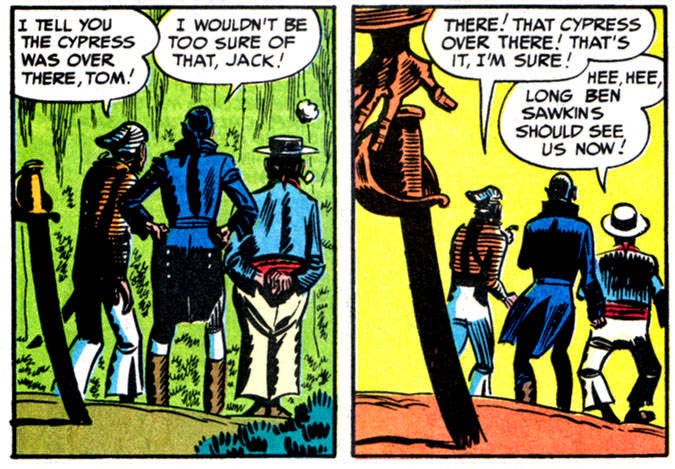 The first book that the new reprint series will be rolling out will be devoted to Harvey Kurtzman's stories for TWO-FISTED TALES and FRONTLINE COMBAT, specifically those he wrote and drew himself and those drawn artists other than his regulars like Jack Davis, Wallace Wood and John Severin (usually with Will Elder), who will get their own books.  That includes this Kurtzman solo story, "Pirate Gold", an historical adventure set around 1800 about a man found drifting at sea, with only vague memories of who is. Eventually, with great anger and violence he puts it all together and jogs his memory, and heads out in search of vengeance and treasure.

Still very early Kurtzman, I'd say he hadn't quite found his voice yet (and in TWO-FISTED would really find it when doing war stories rather than adventure yarns like this). His art has advanced beyond his writing at this point, especially the layouts which have a few clever bits.
No comments:

In retrospect, maybe not funny in quite the way it was intended...

Recently been taking advantage of the high Canadian dollar and some sales to try to pick up most of the back-issues I'm interested in. Among other things, I've managed to finish my run of the Giffen, DeMatteis & Co. Justice League run from 1987 to 1992 (with returns in 1998, 2003 and 2005, and one more later this month), including all the side-bits (Annuals, the Quarterly series, etc.).  Comes to about 120 comics in all (plus I tossed in a few things like INVASION, some SECRET ORIGINS stuff and more). About a third of this stuff is new to me in my current (re-)reading, and I'm mostly enjoying it, at about the half-way mark now.

One new bit to me which reads kind of odd in retrospect, this bit from JUSTICE LEAGUE AMERICA #35. 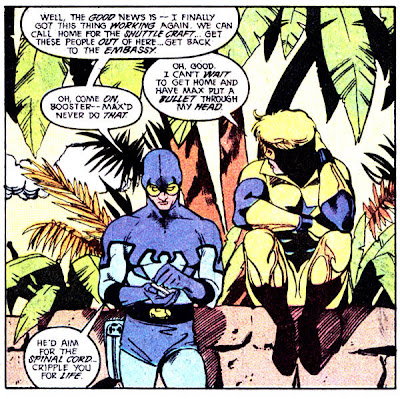 Boy, that Beetle sure was a lousy judge of character... 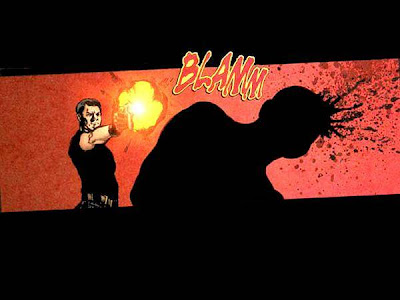 The latest iteration of the Carl Barks created Duck comics for Disney is in a line of hardcovers that are going to be published by Fantagraphics.  Looks pretty good, I look forward to checking them out.

(update: and look here for an updated cover design and some sample pages to see what the colouring will look like). 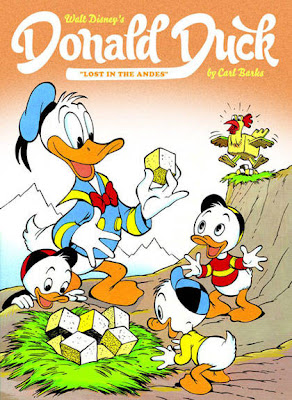 The first volume in a series of affordable, full-color hardcovers collecting the complete works of 'the Good Duck Artist'! Carl Barks' Donald Duck and Uncle Scrooge comics are considered among the greatest and most timeless artistic and storytelling achievements in the history of the medium. Yet until now, his works have only been reprinted in random comic book iterations or high-end collectors' editions. For the first time, read the complete works of one of the medium's greatest artists in affordably priced hardcover volumes perfect for parents and children alike, meticulously restored and recolored to ensure the very best reproduction Barks' work has ever received. Barks began drawing the comic book adventures of Donald Duck in 1942, and he continued for the next 30 years, creating some of the most memorable comics and characters ever put to page. This first volume contains over 200 pages of vintage Barks from 1948-1950, including the title story Lost in the Andes, Barks' personal favorite, wherein Doanld and his nephews embark on a Peruvian expedition to solve the mystery of where square eggs come from. Also featured are the Golden Christmas Tree, Race to the South Seas, and Voodoo Hoodoo, as well as over a dozen other strips and stories. Lost in the Andes also features an introduction by noted Barks scholar Donald Ault, and detailed commentary/annotations for each story at the end of the book, written by the foremost Barks authorities in the world.
No comments: