Will the Shadow get his body back, 25 years later...

So, Dynamite recently published a reprint of Howie Chaykin's SHADOW series "Blood and Judgment" from DC in the 1980s, and followed up with the subsequent Andy Helfer/Bill Sienkiewicz "Shadows & Light" story that launched the on-going series.  Now it looks like they're going on to "Seven Deadly Finns", where Helfer teamed up with Kyle Baker for what's probably my favourite Shadow story ever.

Which means we might get more Helfer/Baker in the almost as good "Body & Soul" some time after that.  Which is going to beg the question, the last issue of the series, #19, ends (spoiler alert) like this: 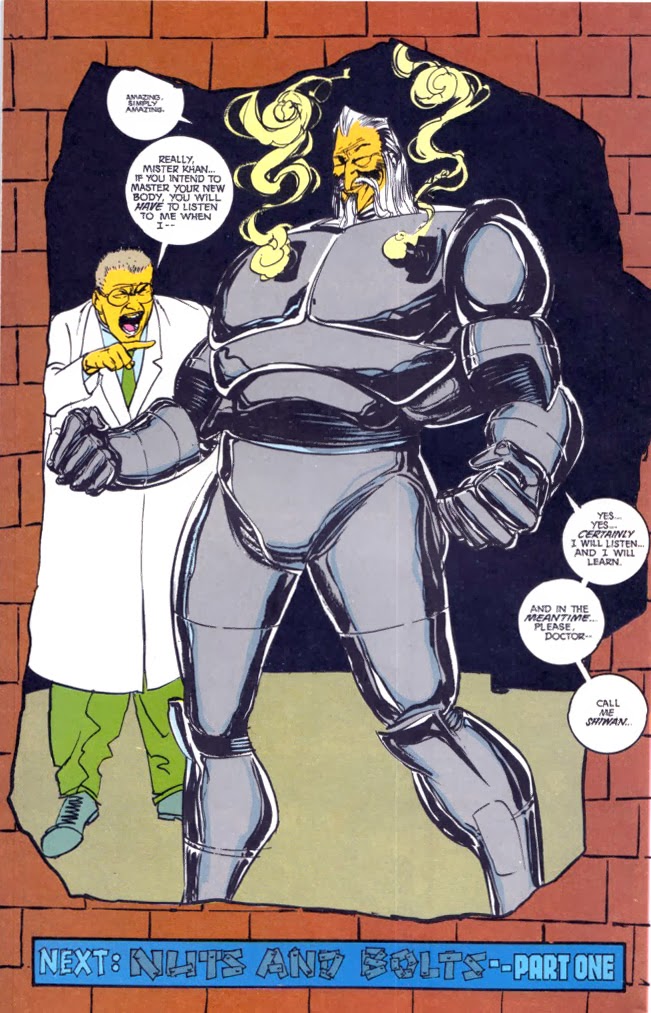 With the Shadow in a similar condition. And because I'm a man who owns too much paper, we were promised this for "Nuts And Bolts" in 1989: 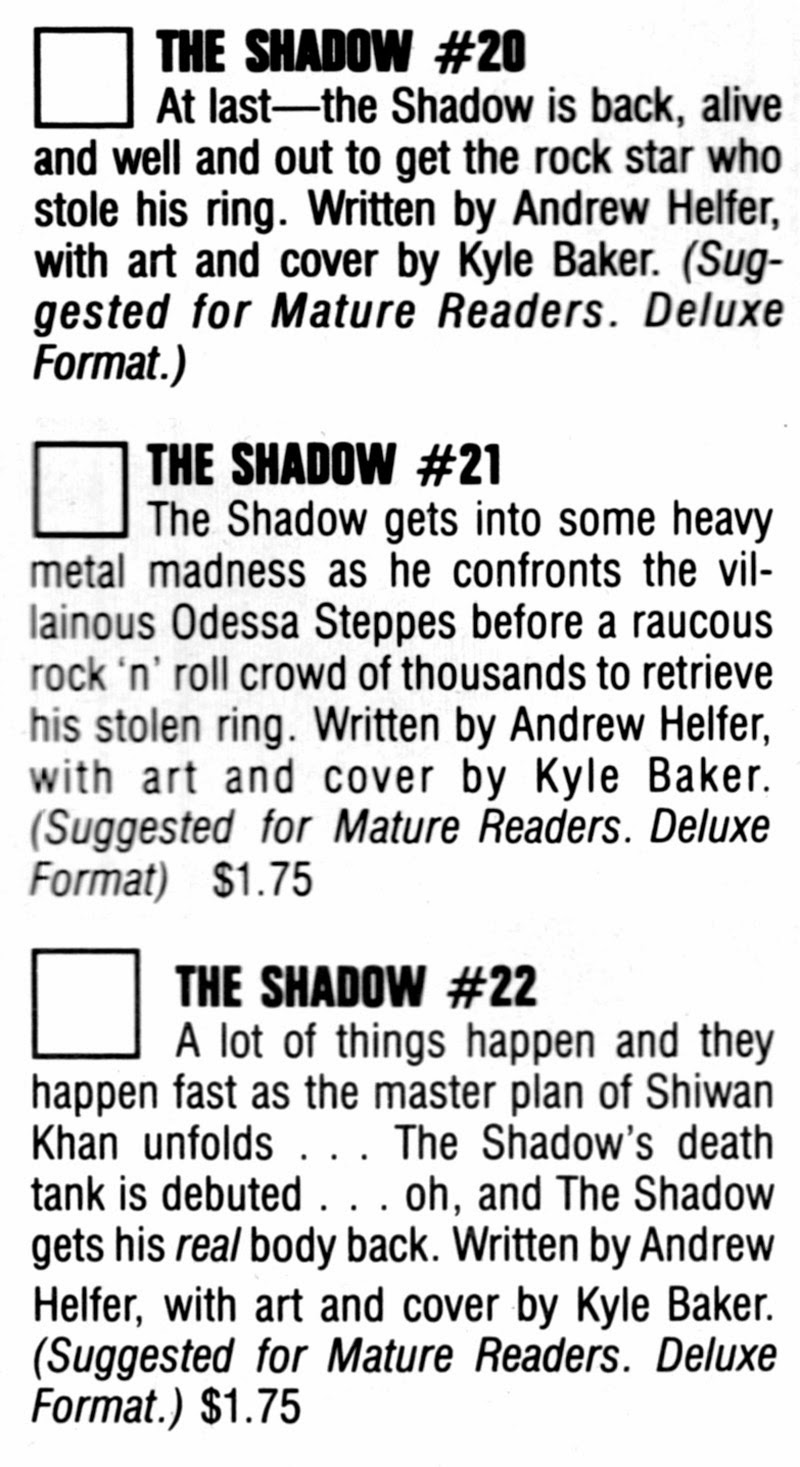 Never published, of course, and instead a few months later we got a more traditional take on the character in THE SHADOW STRIKES.  I don't have the early issues of that book, but I've heard that there's some mention of the abandoned storyline there, maybe a promise of a special to wrap it up? Can anyone confirm? Anyway, now 25 years later I doubt we're going to see a continuation of the story by anyone, much less the original creators. But one can dream. Presumably something must have been written and maybe drawn before the plug was pulled.

More recently read comics, or if you prefer, graphic novels.  No, no one prefers that?  Okay, comics. In particular, these:

And, if you missed them, I recently had slightly longer comments in separate posts on these: 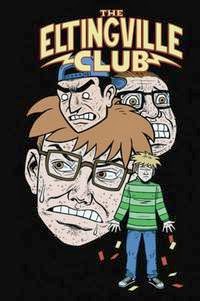 Evan Dorkin has a two-part one-shot (or something like that) concluding his long-running ELTINGVILLE CLUB series coming out this year.  Cover to #1 and cover to #2.

Neil Gaiman has a book coming out reprinting his short story THE TRUTH IS A CAVE IN THE BLACK MOUNTAINS with illustrations by Eddie Campbell (enough illustrations that Gaiman describes it as "almost a graphic novel".  Time to pull out the old "not a graphic novel, Percy" bit). See the cover here. I've read the original short story, and it's pretty good, not great, and has a couple of visual hooks that Campbell could exploit. While looking for info on that, I found out that Gaiman is apparently also writing HANSEL AND GRETEL with artist Lorenzo Mattotti for editor Françoise Mouly's Toon Books line later this year. That could be interesting.

Brian Hibbs has his annual look at comic sales reported through BookScan.  With the usual caveats about what those numbers actually represent, it's still a fascinating snapshot of a particular market for comics. For direct market figures, John Jackson Miller has your fix.

Todd Klein looks at the connection between a 1942 Stan Kaye Superman drawing and a painting which hung in the DC offices. Part one, part two.

I briefly fell into the rabbit hole of reading about Dave Sim's adventures in trying to get the early editions of his CEREBUS books in print, now that his old printer is gone and his old printing methods are obsolete, over at A Moment of Cerebus. I don't recommend trying to follow the whole discussion, but this post comparing different reproductions of the tonework on one image is kind of fascinating. 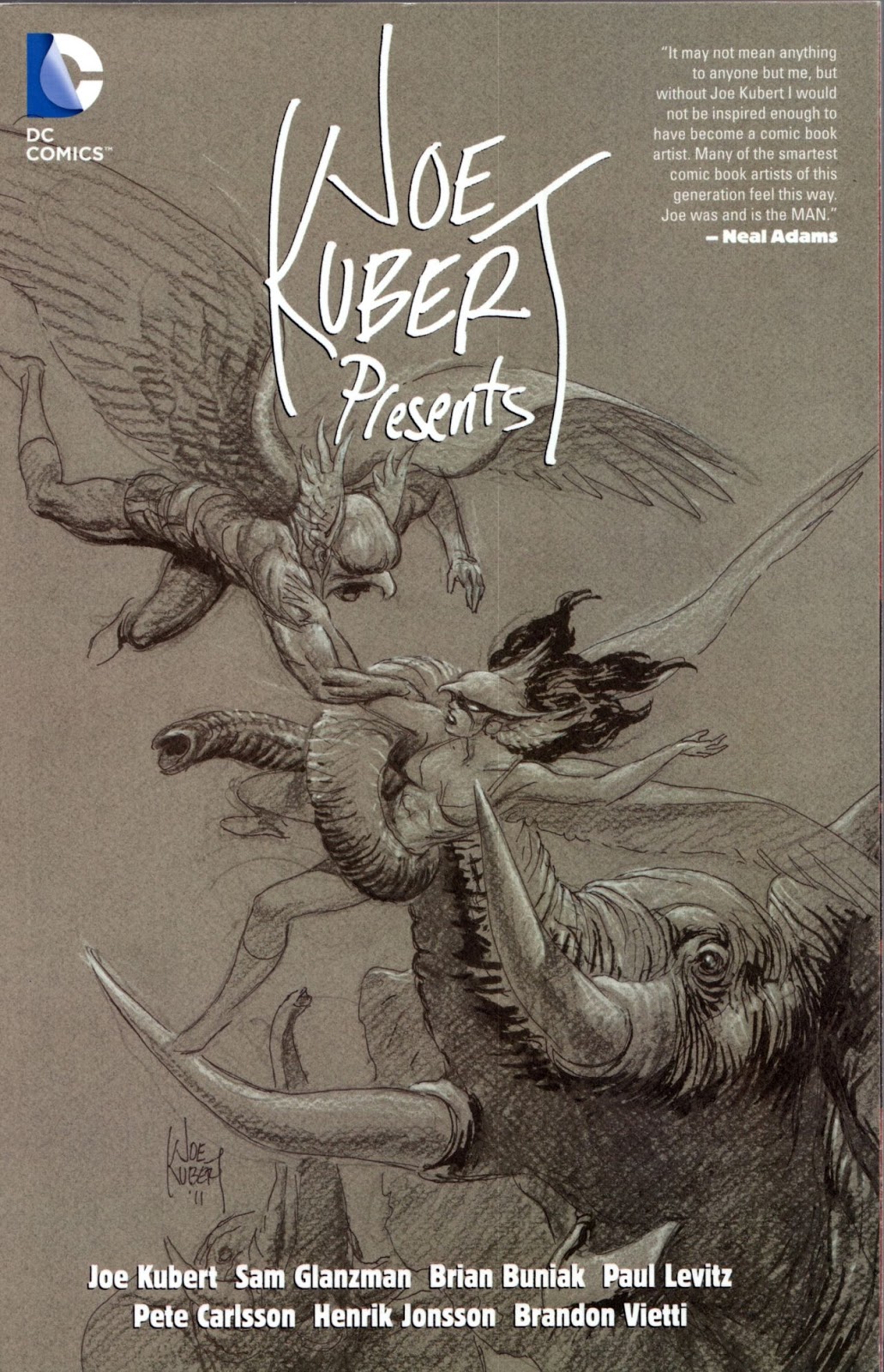 JOE KUBERT PRESENTS (2013) is a collection of the six-issue anthology published in 2012-2013, edited by Joe Kubert and almost completed before his death in 2012. Each issue includes work from Kubert (both solo and with various collaborators), Sam Glanzman and Brian Buniak.

Sam Glanzman's contributions are a return to his USS Stevens war stories, a staple of the 1970s DC war comics (also mostly edited by Kubert). Glanzman served aboard the naval destroyer in the Pacific during World War II, and used both his own experiences and those he heard from others in a series of back-up features that primarily ran from 1970 to 1977, plus a few subsequent stories in a pair of graphic novels published as A SAILOR'S STORY and short stories in SAVAGE TALES. For this series he did a series of 10-page stories telling a variety of events, from the oddball to the comedic to the tragic, as well as looking at some of the major events of the war. Beautifully rendered work as always, drawing on memories still vivid after over a half-century, and a nice reminder of a major but mostly unappreciated milestone in comics history. Hopefully someday these pages will serve as the conclusion to a full collection of Glanzman's WWII stories. In addition to the six stories, there's also a feature where Kubert comments on Glanzman and shows a few of the actual illustrations Glanzman drew while serving on the USS Stevens in the 1940s.

Brian Buniak is represented in every issue with a serialized adventure of Angel and The Ape, reviving the short lived 1960s feature. I thought the concept was cute enough for a single story, with a sort of 1980s era MAD/CRACKED look to the work, but it wasn't really strong enough to sustain a six part story. The two-page spread of classic chicken-fat in-jokes, slapstick and non sequiturs is pretty cute, with some interesting cameos (pay close attention if you missed it, Mike Sterling...).

Other than those two features in every issue, Joe Kubert himself provided the rest of the material in each issue.

His first story, as seen on the cover, features Hawkman and is set in Africa. It has some really good artwork, evoking both his earlier work on that character and his well-regarded 1970s work on Tarzan but The story is a little bit preachy and disjointed, though.

The major Kubert work is the long-lost series THE REDEEMER, which was scheduled and widely advertised and previewed back in 1983, but never actually published.  This book has some concept artwork and what would have been the first three issues of that series, as well as some preliminary artwork for the future issues, which is as far as Kubert got before realizing he couldn't fit a monthly book with the other demands of his schedule. The concept is a history spanning story of redemption and reincarnation, giving Kubert a vehicle to draw a variety of settings, a science-fiction future and the American west of the 19th century in the two stories he got to and planned stories of Roman gladiators, cavemen and pirates among those planned. It's all a little strange, but an entertaining concept, and good to finally have some closure three decades after seeing those ads for the book.

The other serialized Kubert contribution to the book is "Spit", a series of vignettes about an orphan boy who ends up aboard a whaling ship around 1850, inspired by, as Kubert explains, his childhood fascination with MOBY DICK.  This is probably my favourite Kubert art of the book, mostly drawn in the pencilled style he used for a few of his later major works like YOSSEL and DONG XOAI. His passion for the subject matter really comes though in the art, and I just wish there was more room to flesh out the story.

Kubert also does a short ghost story "The Biker", which I enjoyed, especially the horror elements drawn in that pencil style. Paul Levitz writes what is sort of a Sgt. Rock story for Kubert to draw, and it was far better than I was expecting, and Kubert co-writes a few short stories for other artists that are an interesting change of pace.

Overall it's a nice thick collection with a wide variety of material at a great price, well worth picking up for a sample of one of the greatest comic book artists.

THE BOJEFFRIES SAGA by Parkhouse & Moore 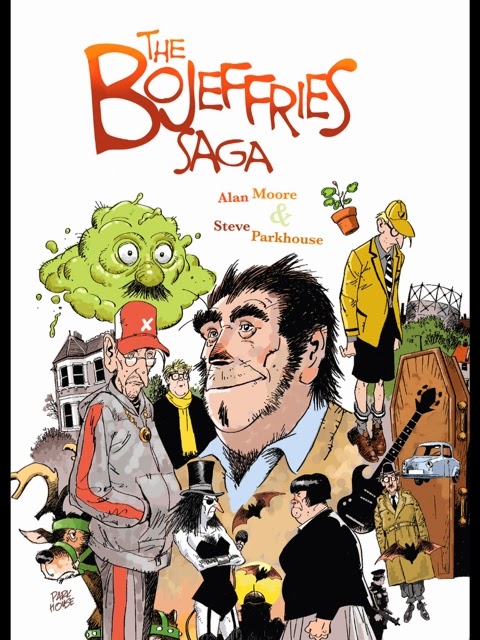 Just reprinted by Top Shelf and Knockabout in both print and digital formats (this review from the digital version), the classic Alan Moore and Steve Parkhouse creation THE BOJEFFRIES SAGA, featuring the original nine stories, serialized in various publications from 1983 to 1991, and a new 24-page story by The Original Writer and The Original Artist.

The series presents the comic misadventures of the Bojeffries family of the English Midlands, as they try to live a quiet suburban life, despite the fact that the family includes a vampire, a werewolf, an elder god and some other members who are even stranger.

If you don't have all the original stories in one or another of their original printings, this is a must have. Some of the funniest stuff Moore ever wrote, and strong distinctive art by Parkhouse. If only the new 24-page story is new to you, it's still highly recommended. The new story doesn't have any chance of being as dear to me as the originals which I've been living with in my head for over half my life, but it has a lot of funny bits and clever callbacks. Plus you get the classic stories nicely reproduced in the original black&white (with red highlights in the case of one story) instead of the colour of the previous single-volume edition.

The original stories still hold up nicely, even after at least a dozen readings over the years. The highlight, as always, is "Sex, With Ginda Bojeffries", wherein our heroine goes out armed with dating advice from Flirt Magazine to find a man not intimated by her. I won't reveal if she succeeds, but I always enjoy the journey, and can't believe how hard I still laugh at the "premature evacuation" line. Of the rest, I especially liked the vacation special, "Our Factory Fortnight", this time around. 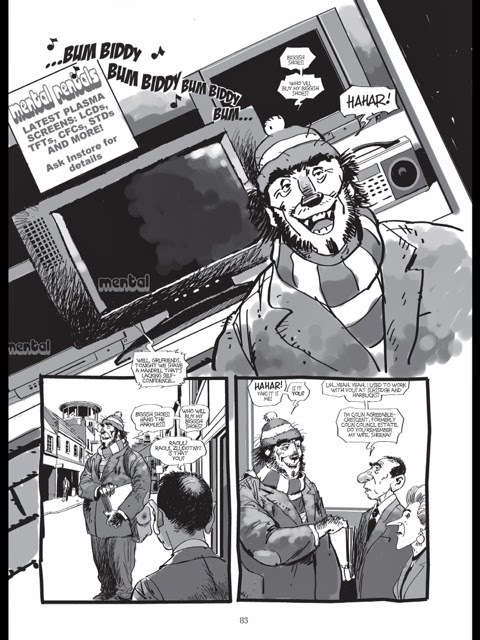 The new story is "After They Were Famous", catches up on the family in the modern day, which finds them estranged from each other in the wake of the unwanted attention from a tell-all biography by son Reth and now dealing, sometimes quite poorly, with 21st century life. Naturally events (in the form of reality TV) conspire to bring the back together.

I was pretty happy with the new story, though I don't expect it'll ever match the original run to me (offhand I can't think of any sort of generation-later follow-up which has). Parkhouse's work hasn't lost a step, although I did find the computer rendered greytone work more than a little distracting at times. It was an odd contrast with the classic linework. Other than that, his faces are expressive and funny, and he does a good job with some of the physical comedy bits. For the script, Moore gets to do some of the playing with language that he's always shown a facility for (though I found a few of his attempts to render accents phonetically a loitile deffacalt to entoiprat). He still shows a good feel for the characters, and gets in a few nice updates to the original stories. I did think the "reality" TV target of some of the parody felt a bit dated (but as I understand, this was scripted a few years ago), but even there he gets off some good gags.

So definitely worth a look.
No comments:

Time for one of those semi-regular attempts to get back to writing here...

Some things I've read lately a variety pack of comics from the last few decades:

PREACHER by Steve Dillon, Garth Ennis and others
OMAHA by Reed Waller & Kate Worley with James Vance
GODZILLA: THE HALF-CENTURY WAR by James Stokoe
YOU'RE ALL JUST JEALOUS OF MY JETPACK by Tom Gauld