Time for the occasional attempt to restart regular service on this weblog for anything but "R.I.P." posts. 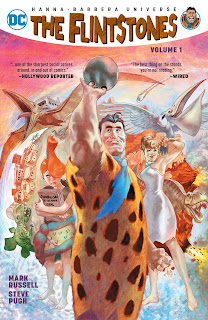 THE FLINTSTONES VOLUME 1 (DEC160395; 978-1401268374)
This is a collection of the first six issues of the current (running up to #12) series published by DC, written by Mark Russell and drawn by Steve Pugh, presenting a modern take on the 1960s Hanna-Barbera cartoon series. I wasn't that interested in this when it was announced, but heard some good things about it, and liked a few of the covers (including those by Walter Simonson and Bill Sienkiewicz)*.

Overall I thought it was pretty good, mixing a few of the charms of the original like the overly laboured puns (Fred's "shell phone" was a particularly good groaner) and adding in some well thought out modern touches. The bit with monogamous marriage being a controversial new development, being protested by fundamentalists, was well done.

I'm not sure the book ever rose above the level of "pretty good" in these six issues, but it reached it pretty consistently. I'll definitely take a look at the second collection.

*[someday someone has to explain to me how these variant covers don't make buying single issues a mug's game. Buying one cover version of each of this six issues would have cost $24. The collection retails for $17, and is readily available much cheaper, and includes each of the covers you'd have gotten on the singles, plus all the variants, without having to hunt for them, and without the trade dress obscuring part of the art] 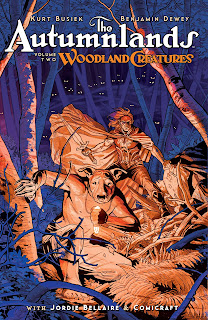 Quite a departure in tone from the first book, as after a short bit at the beginning we leave behind most of the supporting cast that we had in the first six issues and follow the adventures of our main characters Dusty the talking dog and the human "great champion" Learoyd pulled from the past. This is in keeping with the Kamandi roots of the series, as Kam would also frequently leave behind companions for extended periods to explore whatever strange aspects of Earth A.D. that Jack Kirby would come up with. In this case, we get an adventure that explores the roots of the Autumnlands world, in the form of living statues, vengeful "gods", wild magic and talking sheep.

I didn't enjoy this quite as much as I did the first book, as I thought some of the world building around the politics of the various animal societies and the magical basis of the world were pretty interesting, and hoped they would be explored more (of course they still might be in future books, just as Kamandi always ended up encountering Ben Boxer or Doctor Canus or Prince Tuftan again).  I did still enjoy it, and will still be around for a third book if there is one (no issues beyond #14 are scheduled as of this writing). Dewey in particular seems to be growing on the job, and manages some very clever visual bits in the last half of the book. 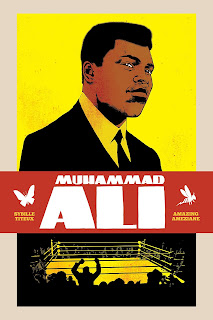 MUHAMMAD ALI (AUG160036; 978-1506703183)
This is an English translation of the French comic book by writer Sybille Titeux and artist Amazing Ameziane, published by Dark Horse, telling the life story of Muhammad Ali (1942-2016). Oddly leaving out his fight with Superman, but never mind that.

This was a pretty decent light biography, hitting most of the highlights you'd expect. I thought the art was the strongest part of the book, very heavily photo referenced (as you'd expect for a story about someone who lived as much in the public eye as Ali did for most of his life), but well selected and expressive, with some nice layouts for depicting some of the fights.

The writing I had a few problems with, starting with the choice to make the narration second person, addressed to Ali ("You came into this world..."). I kept waiting for some sort of compelling reason in the story to use that unusual format, but it never came, just remaining an annoying affectation. There were also a few odd bits in the chronology, where events seem to be mentioned out of order, and a few attempts to tie in Ali's life to some political events both during his early life and up to the present day which never quite gel and seem superficial and forced in the telling (to be clear, I think the connections are very real and worth examining in depth, I just don't think that this book manages to do it effectively).

Quibbles aside, I thought it was an entertaining enough book, well worth reading for a quick look at a remarkable life.
No comments:

Happy 100th Birthday to Sheldon Mayer (1917-1991), one of the greatest comic book creators of all time.  Here's just a quick sample of some of his varied creative work. 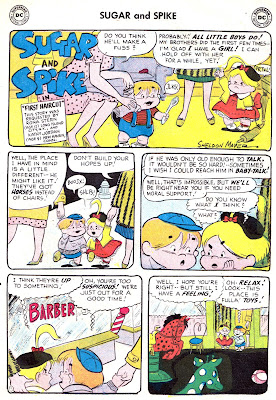 Mayer's most famous creation was Sugar & Spike, which ran for 98 issues from 1956 to 1971, plus hundreds of pages of additional stories in the 1980s, primarily for foreign publication, some seen in English in digests.  The on-going adventures of two neighbour babies who can talk to each other, but not to their parents, it's a constant delight of visual and verbal humour. 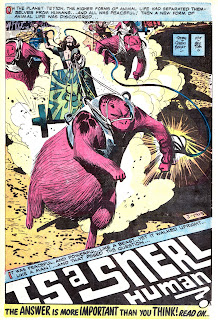 In the 1970s, Mayer wrote (and occasionally drew) three dozen stories for DC's various anthology books.  "Is a Snerl Human?", drawn by Alex Toth, is one of the best of them. 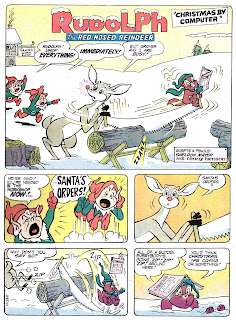 In the 1970s Mayer wrote and drew a number of DC's tabloid format specials featuring Rudolph the Red-Nosed Reindeer, 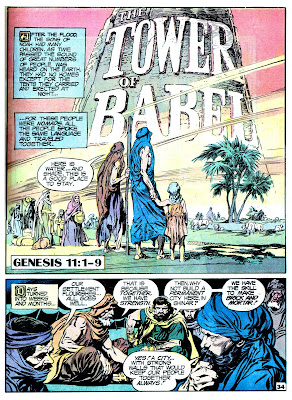 Also for DC's tabloid line, Mayer wrote a book of stories from the Bible.  Only the first one, featuring Old Testament stories, was published, with artwork by Nester Redondo and Joe Kubert, although a significant amount of work for a second book of New Testament stories was done. 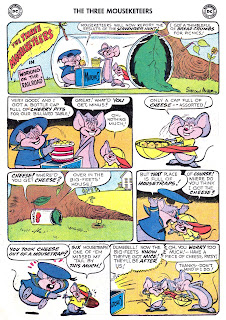 Mayer produced several hundred short funny animal stories, mostly in the 1950s.  My favourites are the Three Mouseketeers stories, a kid-gang of field mice navigating the world of the big-feets. 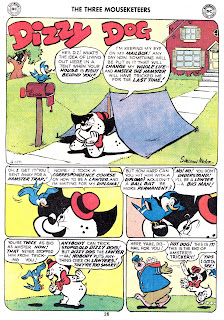 Dizzy Dog stories are also always fun.  Dizzy usually has to defend himself against various attempts of others to take advantage of his innate stupidity, with varying degrees of success. 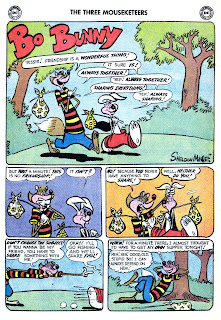 Bo Bunny is the comedy duo of Mayer's funny animal work, as Bo and his "friend" Skinny Fox hobo around, trying to avoid work. 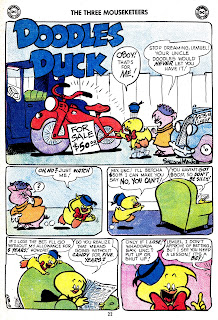 Doodle's Duck is the family comedy of Mayer's funny animal work, at least after the introduction of nephew Lemuel. 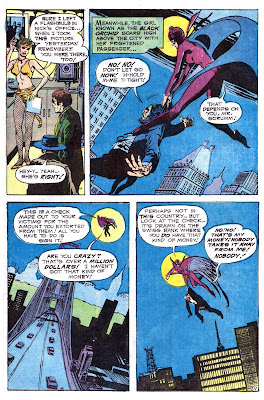 Black Orchid was a super-hero created by Mayer in 1973 with artist Tony DeZuniga, only appearing in a handful of stories back in the 1970s but re-appearing in various forms quite often since. 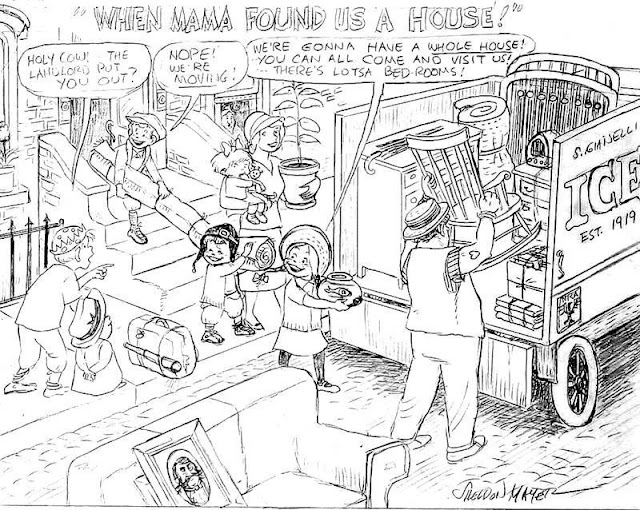 "Up In McWhistle's House" was a proposal for a depression-era story that Mayer worked on circa-1974, apparently never going beyond a dozen pages of an introductory story partly pencilled and some notes on further plans. 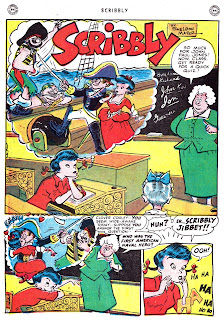 And of course Scribbly is probably Mayer's second most famous creation, beginning as original content for early Dell comics composed of mostly strip reprints in 1936, continuing as a regular feature in All-American Comics (which Mayer also edited) from 1939 to 1944, where supporting character Ma Hunkel took the identity of the Red Tornado and also took over the feature, and then 15 issues of his own book from 1948-1951. Plus a handful of later returns to the character.

For some earlier posts by me about Mayer, see here.  And if you're on Facebook, check out this group for more on Mayer, including foreign covers, unpublished artwork, Sugar & Spike comic strip proposals, fan art and more.
No comments: