A dozen or so comic links 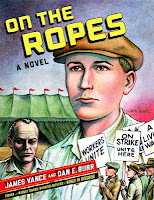 James Vance just posted that he has the final pages of Dan Burr's artwork for ON THE ROPES, the upcoming sequel to their classic KINGS IN DISGUISE. That original is some great stuff, I'll have to pull it out and re-read it before the new book comes out. Burr's art looks sharp on the cover and brief look at the interior work that Vance posted, and the story (catching up on Freddie's story five years later in 1937) sounds intriguing.

Jay Hosler has a neat science comic by a promising newcomer, his son Max.

The Kirby Effect is the new journal of the Jack Kirby Museum, where you'll be able to find things like this 1992 interview with Kirby, both audio recording and transcript.

If you don't already have a copy of Michael Zulli's FRACTURE OF THE UNIVERSAL BOY, Zulli is now selling copies directly. Very beautiful and very strange book.

Evan Dorkin posts the plot to an unpublished Rocketeer story.

Larry Marder has a copy of his upcoming BEANWORLD book, and the three previous books are all available digitally. 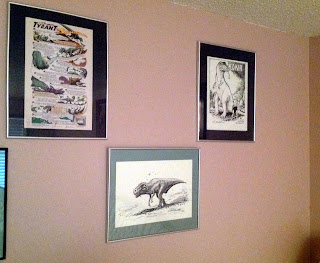 It's good to see Stephen Bissette with some new projects in the works, already including a Tyrant colour print (my copy seen to the left with an older Bissette Tyrant original and a Sam Glanzman Kona sketch) and some new t-shirts, with the promise of more to come.

Or, if you prefer, I've started reading webcomics through Comic Rocket, which has a few problems but is already much more convenient than other ways of following webcomics. You can subscribe to PALEO over here.

Karl Kesel and Tom Grummett's SECTION ZERO is also back as a webcomic, with most of the existing pages already up, with a few new pages mixed in, and more new pages promised after the reprints are done.  Here on Comic Rocket or start here.

Nick Caputo has some interesting research on some rare Marvel comics, including BIG BOY and a NAACP voter registration giveaway.

Todd Klein has a detailed and well illustrated (photos and floor plans!) look at the DC production department of the late 1970s, Part 1 and Part 2.

Check out the Curt Swan artwork on Swanderful. 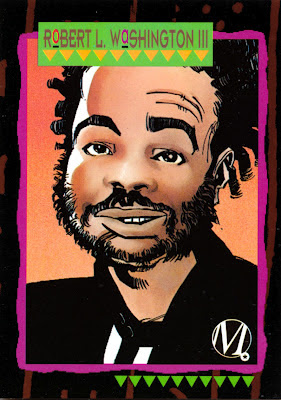 Just wanted to briefly acknowledge the passing earlier this week of comic book writer Robert L. Washington III at the age of 47. Above and below the two sides of his trading card from the 1993 Milestone comics set. 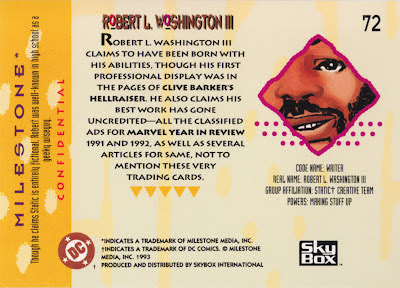 I only had a few brief on-line interactions with Washington, back around 1993 when I first went on-line. I remember he had a high-energy enthusiasm in his on-line personality which perfectly matched what you'd see in his writing.

He's probably best known for his work on Milestone's STATIC series, co-writing the first few issues with Dwayne McDuffie and then solo for most of the next year.  The book was among my favourite monthly reads for most of that run, with a good balance of super-heroics and home and school problems for Virgil Hawkins to deal with, all told with clever dialogue and some imaginative uses of the Static's electrical powers. A very solid run of comics, which still holds up today.  Washington also wrote the first few issues of Milestone's SHADOW CABINET, which had some intriguing stuff.

The next, and unfortunately I believe last major comic book project that Washington wrote was Acclaim's NINJAK series in 1997.  Kurt Busiek was the initial writer on the series which completely re-imagined the title character into a teenaged boy who gains the ability to transform into his favourite video game character, and the complications that ensue from that, including the appearance of the villains from the game. I really enjoyed the series from the launch, much more than I expected to, and was very happy to hear soon after the launch that Washington was going to be writing the book. It seemed to be a perfect fit of creator and concept, and indeed the book only got better with the addition of Washington (officially his issues were co-written with Busiek, but according to a comment on Busiek's Facebook page most of the writing after their first few issues was essentially Washington solo). Unfortunately the series only lasted a year, but it was grand fun, with the same balance of teenage life and super-heroics that you had in STATIC. Just re-read the whole run, and it's still a breath of fresh air.

So while it wasn't a huge body of work, what there was from Washington was remarkable, a sense of fun and imagination applied to super-hero action in an entertaining way. I wish we'd had more of his unique voice.

Washington was among many comic book creators who were helped by The Hero Initiative, if you're able consider a donation tagged with his name to help them pay for Washington's funeral and continue their work.
No comments: