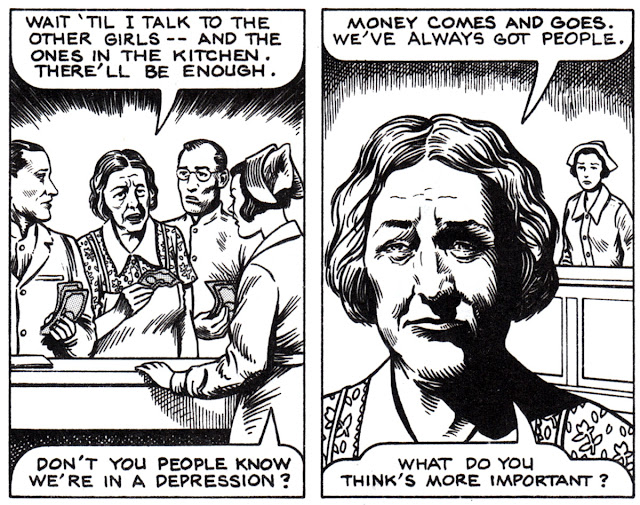 Sorry to hear about the passing of comic book writer James Vance. Neil Gaiman has a few recollections, including a link to a fund-raiser for his family.

Vance is best known for his Great Depression set comic with Dan Burr from the 1980s, KINGS IN DISGUISE, and the sequel ON THE ROPES published in 2013 (I wrote about it here), both based on a supporting character from a play he'd written in 1979. Some excellent comics. The illustrations above are Harvey Kurtzman's cover to #2 of the original serialization and a short KINGS story from Vance and Burr from the benefit comic IMAGES OF OMAHA #1 [1992]. Shortly after KINGS he wrote OWLHOOTS with artist John Garcia, a western  set in the early 20th century (with flashbacks to the 19th century) about an aging marshal looking to make a movie about his life. Unfortunately it was unfinished due to low sales, with only two of six issues published.

Before ON THE ROPES, Vance and Burr reunited for a short story in THE SPIRIT - THE NEW ADVENTURES #2 [1998], which is a nice little romp for Will Eisner's character. Vance's most "mainstream" work was probably the Batman story he wrote (as he said, for a chance to work with editor Archie Goodwin) in BATMAN - LEGENDS OF THE DARK KNIGHT #80 - #82 [1996], with artists Doug Braithwaite and Sean Hardy. Set early in the career of the vigilante created by Bill Finger (with Bob Kane), it has several nice scenes of Bruce Wayne interacting with Alfred and Captain Gordon. Vance also worked on James O'Barr's creation the Crow with artist Alexander Maleev in THE CROW - FLESH AND BLOOD #1 - #3 [1996], featuring the first female Crow, a murdered government agent Iris Shaw seeking revenge against right-wing militia types.

One of Vance's longer works in comics was on NEIL GAIMAN'S MR. HERO THE NEWMATIC MAN #1 [1995-1996] for Tekno-Comix, with artist Ted Slampyak and others developing some concepts Gaiman came up with. The company seems to have been a bit chaotic, but some of the comics I've read were pretty decent. Read some of the messiness on the company end on Vance's blog, starting here. Vance also wrote some interesting stuff in ALIENS - SURVIVAL [1998] with artist Guy Davis and he and Kate Worley co-wrote PREDATOR - HOMEWORLD [1999] for artists Toby Cypress and Mark Lipka, both pretty decent genre tales based on the concepts from the movies. 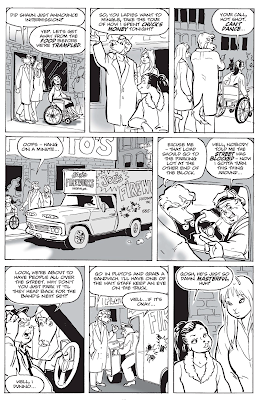 Vance also finished up writing OMAHA THE CAT DANCER after Kate Worley passed away, based on her notes for creator/artist Reed Waller, doing good work that seamlessly fit in with Worley's earlier stories and wrapping up the long-running saga.

And I'll just finish with a few words from Alan Moore's introduction to KINGS IN DISGUISE: