It is now a full week since Frederik Schodt posted about the passing of Keiji Nakazawa five days earlier.

Of seven major English language comic book news websites, including six which have been nominated for the Eisner Award for Journalism, four appear not to have mentioned it at all. Of those, only one has been completely absent of updates since Schodt's posting. The others have all maintained regular posting, including numerous articles which could not have been written in advance for holiday posting.

Keiji Nakazawa has passed away last week at age 73. He was the creator of the comics BAREFOOT GEN and I SAW IT, based on his first hand experiences as a child in Hiroshima during World War II and as a survivor of the atomic bomb dropped on that city on August 6, 1945, killing much of his family and having repercussions going on for years, often as a result of inexcusable negligence by both Japanese and American authorities. GEN is a fictionalized account, with the title character being a composite experiencing both things Nakazawa himself did and stories he heard of other survivors and victims. I SAW IT is a shorter work, more strictly autobiographical. 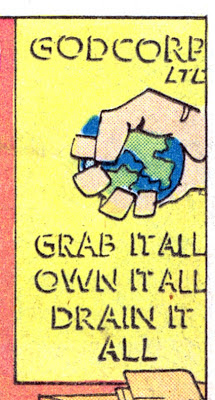 Steve Bissette passes the news that Elaine Lee and Michael Kaluta got a "cease and desist" letter from Marvel/Disney over the Lee/Kaluta creation STARSTRUCK, which was briefly published by Marvel in the 1980s, following some stories printed by other publishers including Heavy Metal, and subsequently published by Dark Horse and most recently IDW. The matter seems to have been resolved to the creators' satisfaction, but really should never have gotten as far as it did.

In honour of the incident, some images from Steve Gerber and Jack Kirby's DESTROYER DUCK #1 (1982), that strike a resonant chord now more than ever. Gerber and Kirby were always among the most prescient of creators to work in corporate American comics, and prominent on the long list of creators to feel the sting of the corporate policies.

We're long overdue for a reprint of DESTROYER DUCK, aren't we. Hopefully soon. A new generation deserves to be introduced to Booster Cogburn... 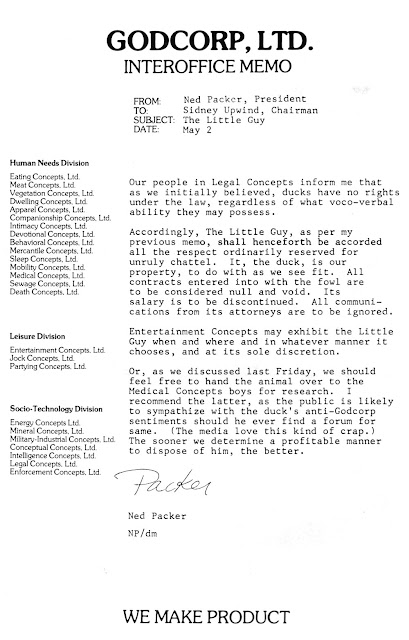