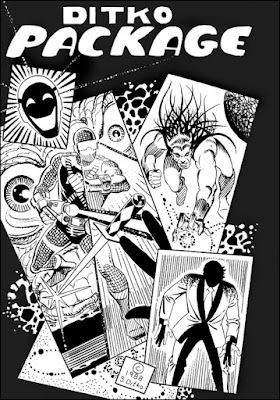 It was announced a few days ago that Steve Ditko passed away recently at age 90. It should probably be obvious that I was a big fan of his work, from the beginning to the (current) end (with hopefully quite a bit of posthumous releases still to come) and you can look through the archives of the other weblog for looks at quite a few facets of his career, including over 200 complete stories from the 1950s (every non-Marvel story he did in the 1950s, except those reprinted in recent Snyder/Ditko publications).

You can find all sorts of biographical information all over the place right now about Ditko, some of it even partially accurate. The important thing is the published work, which in Ditko's case comes out to over 15,000 pages over 65 years of being published. Almost all of those pages he pencilled (about 300 pages he just inked, mostly over Jack Kirby in the 1960s), the majority of them he inked and a large percentage he wrote or co-wrote, including most of the best of those 15,000+ pages. A few thousand he even lettered.

My own journey with Ditko begins around 40 years ago, when he had already been working professionally for a quarter century. While I may have seen his work before that, the first clear memory I have is the 1978 Pocket Book DOCTOR STRANGE, MASTER OF THE MYSTIC ARTS which reprinted the first 18 stories of Ditko's creation from 1963 to 1965. Despite the reduced size which makes the book hard for me to read now, it was a favourite of mine at age 8, with endlessly imaginative characters and settings all in just 5 to 10 pages per chapter. It would be a few years before I found out that the back half of Ditko's run on his creation was even better the front.

I'd encounter Ditko's work a few times in the next few years, mostly on stories he just pencilled, including a few short stories in DC's mystery/sci-fi anthology titles and the one year run he did on Starman with Paul Levitz in ADVENTURE COMICS. That was a particular favourite, and somewhere along the line it must have clicked that this was the same guy who did those Doctor Strange stories I loved so much. 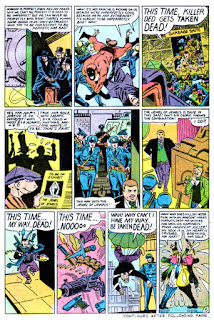 Somewhere in there I also somehow got a copy of  E-MAN #4 from Charlton in 1974, which features an uncredited back-up story featuring an enigmatic character named Killjoy, which to this day is one of my favourite comic book stories ever. I'm not sure when I finally put the Ditko name to that story.

In the early 1980s, I began to find out more about comic book history, and reprints and back issues became more available, so I became aware that this Ditko guy whose work I'd enjoyed in various scattered places was actually somewhat of a big deal, having actually created not only Doctor Strange, but also the even more successful Spider-Man. I got some reprints of his Spider-Man stories and liked those a lot more than any of the new Spider-Man comics I read.

I mostly stopped buying comics in the mid-1980s as newsstand selection dried up, but kept reading the ones I had, so when I got back into buying comics around 1988 those early exposures to Ditko that I had read and re-read were definitely something I was ready to explore more. I found out as much as I could about his work, and over the next few years read more of his Spider-Man and Doctor Strange work, plus found other work like his Creeper, Shade and The Hawk and The Dove, plus reprints of his early sci-fi/fantasy short story work for Charlton and Marvel.

And then somehow I got lucky enough to get the now hard-to-find two volumes of THE DITKO COLLECTION that Robin Snyder edited in 1985 and 1986. These collect most of the black and white independent creator-owned work that Ditko created from 1966 to 1976, originally published through various fanzines and small-press outlets. This was quite a revelation, as just about everything I'd seen by Ditko before was filtered through writers, co-writers, editors and (often) inkers. While his imagination and storytelling couldn't help but come through even with all those filters, that only barely prepares you for the pure experience of stories where Ditko actually expresses his philosophical opinion (most notably in the Mr. A. stories in those collections, but also Avenging World and the rest) using all the skills he displayed on his mainstream work.

Make no mistake, I liked Ditko's work before I read those two books, and if asked would probably have described myself as a Ditko fan, but it was only after reading them that I think I truly appreciated his work. After that it was really no return, as I would make an effort to get any Ditko I could lay my hands on. Along the way I discovered great works like Static, The Mocker and Laszlo's Hammer, a second Killjoy story from the 1970s (both reprinted in superior black and white in THE DITKO PACKAGE), plus a seemingly endless supply of minor delights in this mainstream work like his Charlton and Marvel short stories, which often have unexpected storytelling flourishes. It's been great to see him active in the last decade (with co-publisher Robin Snyder) with not only over a thousand pages of new comics (with characters including Miss Eerie, The Madman and more Mr. A.) but also reprints of many of his long out-of-print classic independent comics and dozens of essays on various topics. I was glad I could play some small part in publicising those publishing efforts.

So, tip of the hat to S. Ditko, thanks for the last 40 years of interesting, entertaining and often enlightening reading, which I look forward to continuing to read for the next 40 years.
No comments: