Wow, the last half-year I've only posted here about comic book creators dying and one creatively dead idea. That's depressing. Some quick bits on stuff I should be writing about.

In early 2011 I posted a list of 11 books for that year that I was looking forward to.  10 of them actually came out and I now have them.

SUGAR AND SPIKE ARCHIVES VOL. 1
Actually ended up being better than I expected, since they expanded the page count to include most (but not quite all) of the additional features by Mayer, like paper dolls and activity pages. Anyway, great book, hopefully it did well enough to see a second volume, or maybe a big thick black&white SHOWCASE PRESENTS volume.

FRACTURE OF THE UNIVERSAL BOY
Michael Zulli's more than slightly enigmatic book, it's going to take a few readings to really get a handle on it. Beautiful art, probably the best reproduction Zulli's work has ever gotten.

POGO: THE COMPLETE DAILY & SUNDAY COMIC STRIPS VOL. 1
Actually made it out, just a few months later than scheduled.  The daily strips in here I'd seen before, but never looking quite this good, and the full colour Sunday pages were almost all new to me and a real treat.  Now to begin wondering why Vol. 2 hasn't shown up on the schedule yet.

EMPIRE STATE: A LOVE STORY (OR NOT)
Jason Shiga's take on a romantic comedy, it didn't really clear the high bar set by BOOKHUNTER and MEANWHILE, but it was okay.

THE STEVE DITKO OMNIBUS VOL. 1
And the follow-up Vol. 2 which came out in early 2012, when taken together with the earlier CREEPER collection that brings all but a handful of Ditko's work for DC into print.  Very little in the two books was new to me, but it's good to have them in a more convenient format, and there's some great stuff in there, especially the SHADE and THE HAWK AND THE DOVE stories.

BOOK OF HUMAN INSECTS (Ningen Konchuki (人間昆虫記))
Haven't actually gotten around to reading this yet, I have to be in the right mood for Tezuka's weird stuff and haven't been since I got a copy. Looks strange.  And I see Vertical has a new edition of ADOLF coming out in two volumes later this year.

A TREASURY OF XXᵗʰ CENTURY MURDER: THE LIVES OF SACCO & VANZETTI
Very engaging account of the alleged crimes, trial and eventual execution of Sacco & Vanzetti, I've read about half of Geary's TREASURY OF... MURDER books, and this was my favourite of them.  Looking forward to the next one, the Hall-Mills Mystery.

PS MAGAZINE: THE BEST OF THE PREVENTIVE MAINTENANCE MONTHLY
Was pretty much what was promised, a nice low-cost high quality sampler of what Will Eisner was up to in the middle two decades of his life. I can't really judge if it did the job of actually teaching anything, but it has some attractive and amusing cartooning.

FEYNMAN
Wrote about it here, a nice overview of some highlights of Richard Feynman's life.

THE JACK KIRBY OMNIBUS VOL. 1
Very good look at Kirby's non-Challengers 1950s work for DC, lots of well drawn stories.  Not Kirby's best by any stretch, but a nice addition to the surprisingly vast Kirby library DC's managed to get out in the last few years.


That leaves Steve Bissette's TALES OF THE UNCANNY from the original list, an anthology featuring his share of the 1963 characters still unreleased.  Bissette's said recently it's still being worked on to come out in some form, so here's hoping.  In the meantime, he's got some dinosaur and zombie t-shirts.
No comments: 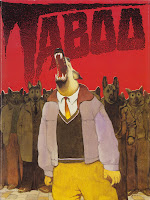 And a quick farewell to Jean "Moebius" Giraud, famed French comic book artist. I'm not as familiar with his work as I should be, as I missed the first big wave of his work being available in English, but I've enjoyed a lot of the bits and pieces I've seen.  Shown above are a handful of images I haven't seen on-line since I heard he passed away.  YOUNG BLUEBERRY: BLUEBERRY'S SECRET is part of a long-running western series that he created with Jean-Michel Charlier. The MARVEL AGE #71 cover has an image from the "Parable" story that he drew featuring Jack Kirby's creation the Silver Surfer.  The TABOO #4 cover was originally drawn for the movie LES CHIENS (André Ruellan & Alain Jessua, 1979), and that issue also contains the Jodorowsky/Giraud "Les Yeux Du Chat".  The MARVEL TALES #253 cover features the Steve Ditko (and possibly others) creation Spider-Man in the background, but I imagine the reason Giraud was commissioned was the presence of the Roy Thomas / Gil Kane vampire character Morbius.
No comments: 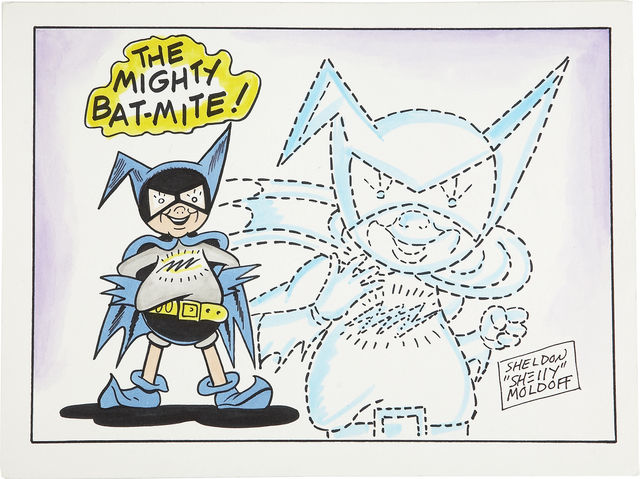 A quick note to mark the passing of Sheldon Moldoff, one of the primary Batman artists from 1953 to 1967, with many other credits going back to the 1930s.  I really enjoyed reprints of the Batman work he did, many of them with Batman co-creator Bill Finger, although unfortunately neither man was usually credited at the time.
No comments: