THE ROCKETEER: CARGO OF DOOM by Samnee & Waid

THE ROCKETEER: CARGO OF DOOM collects a recent mini-series of the continuing adventures of the Dave Stevens creation. Yeah, I know I said "I'm not the market for non-Stevens Rocketeer stories", but I kind of liked the look of Chris Samnee's artwork, and have occasionally liked Mark Waid's writing in the past, so I figured I'd give it a look.

Samnee is much more to my liking for this material than the artist of the previous book I read. He doesn't try at all to draw like Stevens, but he's close enough on the spectrum that the characters and setting look recognizable. His style is closer to the old adventure strip artists like Frank Robbins and Noel Sickles, which nicely suits the subject matter. Unfortunately, I didn't like the writing as much. It did the required bits of business to get Samnee some neat stuff to draw (airplanes and dinosaurs), and the required bits of thinly disguised period pop-culture homages that characterize the series (a Doc Savage villain and the dinosaurs coming from the Skull Island of KING KONG fame, and I assume the distant villain Trask set up for a sequel is also some pop culture reference I don't recognize), but other than that it didn't really feel like the series Stevens set up.

So I guess what I want is to combine Roger Langridge's writing in the HOLLYWOOD HORROR series with Samnee's art in this one.
No comments: 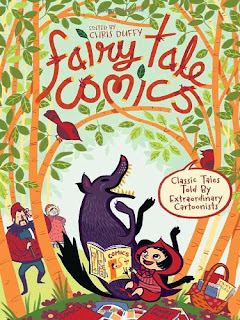 FAIRY TALE COMICS is a recent anthology of 17 comic book adaptations of traditional fairy tales, about half from the Brothers Grimm and the balance from a variety of other sources, edited by Chris Duffy as a follow-up to his earlier NURSERY RHYME COMICS (2011). I thought there was some cute stuff in the prior book, but nothing too memorable, as the short length of the stories (mostly 2-3 pages) and the inherent nonsense of most of the source material didn't really work for me, although I'd have no trouble recommending it to someone a few decades closer to the target age group. FAIRY TALE COMICS was much more satisfying to me. Most of the stories are pretty familiar, of course, but a few of them were new to me, and pretty enjoyable.

I think the highlight was David Mazzucchelli's "Give Me the Shudders", one of the more obscure of the Brothers Grimm sourced stories (or at least the only one I hadn't heard before). Really makes you wish Mazzucchelli did more than one book every decade. He packs a lot into the story, with some nice subtle facial expressions and a lot of funny slightly creepy imagery.

Also high on the list, Raina Telgemeier does some nice stuff with the familiar "Rapunzel" story, Ramona Fradon provides some of the funniest scenes in the book in "The Prince And The Tortoise" and Luke Pearson's "The Boy Who Drew Cats" is a great little off-beat adaptation of the Japanese story which will definitely get me to check out his HILDA books.  Same for Joseph Lambert's Br'er Rabbit story "Rabbit Will Not Help", which has me looking forward to reading some more work by him soon.

Really solid book, with more than a fair share of excellent stories, and just about everything else at least interesting and with a distinctive style.
No comments: