Y'know, I didn't like 30 ROCK during what I saw of the first season. A few months ago I started watching it again, and the second year was a major improvement. Even so, I'm surprised that the episode from a few days ago (which seems to be the last before the strike, and depending on how that goes maybe the last of the season and maybe the series) ended with one of the best extended scenes I've seen in a sit-com in years. Fortunately, I taped it rather than watching it live (for some reason NBC blocks some of the video content of their site to Canadians, so I can't watch it there, but you probably can) (added later, here's another link that should work worldwide), so I've been able to watch it a dozen times, and it still hasn't gotten old. The cast does a musical number, "Midnight Train to Georgia", which starts off odd and just gets weirder from there. Doesn't sound so great on paper, but brilliantly done. It'll be a shame if the series doesn't come back.
No comments: 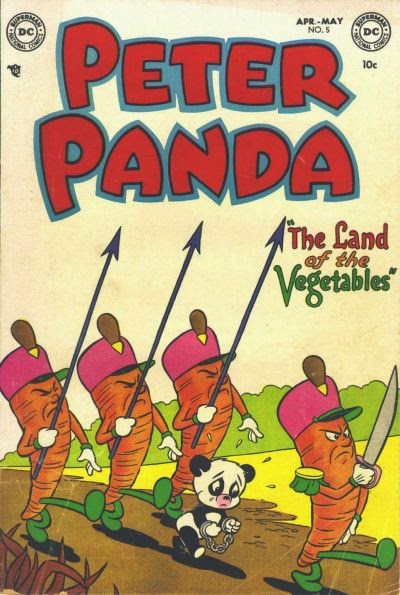 I was all set to make a joke about how this was one of the few bondage covers not listed as such in Overstreet, and I figured I should make sure of that. It's actually listed as "Classic-c (scarce)" (and at twice the price of surrounding issues). Guess they couldn't quite handle listing an issue of PETER PANDA as having a bondage cover... TINY TYRANT by Lewis Trondheim (writer) and Fabrice Parme (artist) is a collection published by First Second in 2007 of a dozen ten page stories featuring King Ethelbert, the spoiled six year old ruler of the kingdom of Portocristo, where he expects everyone to bow to his whims. The stories were published in France under the title LE ROI CATASTROPHE.

I wasn't really sure what to expect from the book, since Trondheim's work had been hit-or-miss with me, mostly just liking some of the DUNGEON stuff done with Joann Sfar. I was pleasantly surprised to find that it was one of the best new comics I'd read in a while. It's a bright and funny book, heavily influenced by classic animation. It most reminds me of the old Jay Ward cartoons, with a similar frantic pacing and mixture of slapstick and verbal humour. And while possibly not a direct influence, a lot of it also reminds me of John Stanley's O.G. Whiz, which I have a particular fondness for. Every story is a compact little adventure following the whims of a child who knows he can get what he wants. I especially liked the occasional eye-rolling aside from the grown-ups as they resign themselves to having to deal with every little thing that passes Ethelbert's mind. 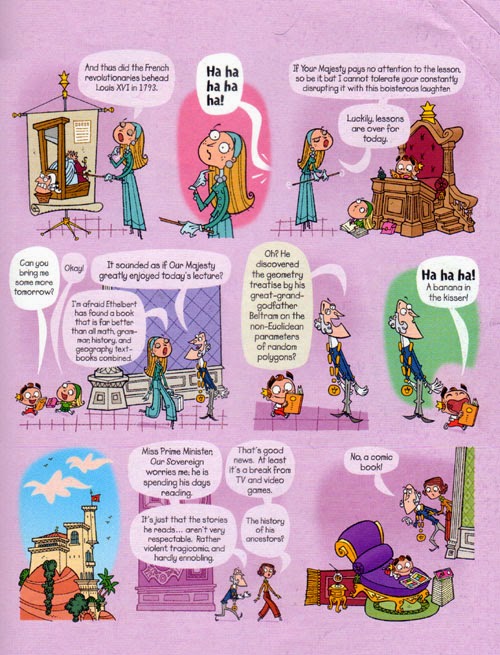 My favourite of the dozen stories is the first, "The Ethelbertosaurus". The King is bored with the recitation of the business of his kingdom until he hears the word "dinosaur", which sends him straight off to dig, where he's disappointed to discover that "his" dinosaur is just a small one. Not being one to accept his lot in life, he tries various ways to get his dinosaur the way he likes it, leading to some cloning and some time travel and a very unexpected twist at the end.

"The Great Love Race" establishes that there are other such child rulers in Ethelbert's world, including his cousin Sigismund and the rather verbose Princess Hildegardina. Which perhaps explains why Ethelbert's subjects put up with him, since it seems it could be worse.

"Books Are Our Friends" is another highlight, showing what happens when Ethelbert catches a glimpse of a comic book belonging to the daughter of his tutor, finding it much more interesting than his studies and, as is his way, becoming obsessed with them, leading to his adventure in trying to get his comics signed by the creator, who happens to hate royalty.

"A Surprise Visit" is a great demonstration of the slapstick nature of the series, with Ethelbert deciding to impress Hildegardina by having one of his subjects translate her long words and feed him some lines through a radio. Needless to say the radio winds up in wrong hands.

"A Routine Investigation" is a strange entry, exploring what happens when they discover a shipment of bootleg merchandise featuring the image of Ethelbert and, to Ethelbert's surprise, designed to mock him. He insists on going along to investigate, with about the results you'd expect.

Other stories feature Ethelbert deciding he wants to meet Santa Claus, replacing all the kids in his kingdom with robot doubles of himself, competing with his cousin for an inheritance (an especially dark twist there) and trying to secure his legacy. None of them are less than amusing, and several are excellent.

As usual for First Second, this is also a gorgeously designed book. Each story is printed on a different pastel-shaded background, the linework is sharp, the colours are bright. Definitely something that a lot of other publishers should look at when deciding how to put a book together.
No comments: 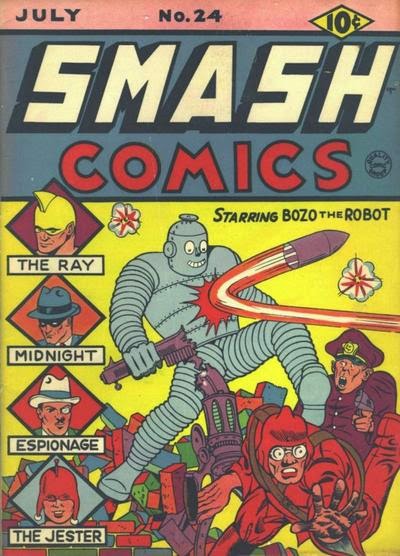 The early covers of Quality's SMASH COMICS featuring Bozo the Robot are really a delight. I don't know if I'd read any of the stories, since I don't think they can live up to the covers.
No comments:

What comic books will do to you

Slightly more interesting posts than favourite old covers to follow someday, but here's one that something I saw today reminded me of. 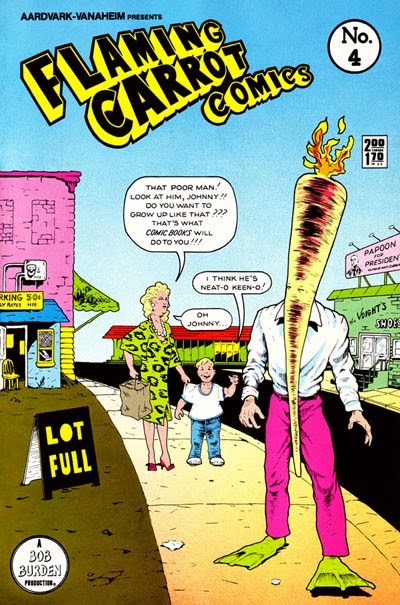 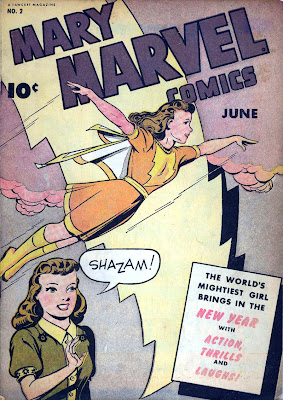 You don't see that many New Year themed covers on comics, probably because of the timeliness problems. This one makes a mention of the New Year, but has a June cover date, so presumably didn't come out until a few months into 1946 (the previous issue was dated December, so likely this was supposed to out earlier but slipped on the schedule as part of the post-war shifts in publishing).
No comments:

Not really a "resolution" or anything, but I think I'd like to get back to regular updates on the weblog in 2008, so might as well start with a post on the first day, looking back at 2007 and some of the things I liked, most of which I didn't get around to talking about.

Non-reprint comics first, with the stuff on the bookshelf. Bryan Talbot's ALICE IN SUNDERLAND was definitely one of the best things I read, just a delightfully well realized book that surprised me by just how good it was, and Talbot's name carries pretty high expectations to begin with. I also enjoyed the first two volumes of Mark Crilley's MIKI FALLS series, which deserve a longer post. Eddie Campbell's THE BLACK DIAMOND DETECTIVE AGENCY is also worth a read, though a bit of a lesser bit of work from him (but still ahead of most of his super-hero stuff).

Couple of welcome comebacks this year. Some new GROO from Aragones/Evanier at long last. Only read the one-shot 25th anniversary special so far, but it was pretty good. Rude and Baron back on NEXUS, though with just one issue out so far, is long overdue. And Steve Bissette coming out with a few new things was welcome. The big comeback hasn't hit print yet, but Larry Marder returning to the business of BEANWORLD has made me more happy with the online art samples and teasers than should be allowed.

Also among new comics, there was some stuff I liked from usual suspects Stan Sakai, Linda Medley, Paul Grist, Mark Martin, Evan Dorkin and a few others. I really need to get out and sample what new stuff there is.

Mostly I bought reprints, of course. In addition to the Kirby and Ditko covered on other weblogs, I got a lot of DC's SHOWCASE b&w volumes. Gotta love an age where you can get a reprint of "The War That Time Forgot" and other great stuff. Also reading a lot of the comic strip reprints, like PEANUTS and WALT & SKEEZIX and POPEYE (looks like POGO is delayed until next year). Got a few Osamu Tezuka volumes, which are strange and wonderful. Rick Veitch reprinted some of his 1980s material (ABRAXAS and SHINY BEASTS), which I'd only seen a few samples of before.

Only saw a handful of new movies, mostly on home video. Best was probably HOT FUZZ, which was a little absurd, but managed to make it work. Saw the two halves of GRINDHOUSE separately. DEATH PROOF didn't work overall, though I liked a few bits. PLANET TERROR was great, though, really buying into the concept. Saw both KNOCKED UP and SUPERBAD, mostly because I really liked 40 YEAR OLD VIRGIN, but thought they were at best just okay. 1408 wasn't too bad of a horror movie, mostly thanks to John Cusack's acting carrying it. STARDUST I guess I posted about before, like it less the more I think about it. Michael Moore's SICKO was pretty enjoyable, in a "what a strange world we live in" kind of way.

Not liking that much on TV. THE OFFICE was in a bit of a slump before going into repeats, presumably for an extended period now. On the other hand, I liked the new season of 30 ROCK a lot more than what I saw of the first. PUSHING DAISIES has been a bit hit-or-miss, but I really enjoyed the bits that I like. Don't really follow any other shows that closely. On the news/talk front, I do still enjoy Keith Olbermann's newscast, and look forward to the DAILY SHOW / COLBERT combo coming back after the strike (I don't know if I'll watch the writer-less versions).

Didn't really like any new music last year, and for reading of a non-comic variety mostly was re-reading some old stuff. Though I did read the last HARRY POTTER book, thought it dragged a bit and was vaguely unsatisfied by the ending, but mostly liked it.
No comments: