Been watching a lot of movies lately, maybe I'll post about them soon. For the moment, I wanted to mention that I really enjoyed the latest Christopher Guest / Eugene Levy film, FOR YOUR CONSIDERATION. Not quite as good as A MIGHTY WIND, but very entertaining. And as good as all the regular players are, the show was really stolen by ventriloquist weather forecaster Nina Conti and her puppet Monk. She was hilarious, and also has some great stuff on the out-takes on the DVD. Through the magic of the interweb, I see that some of the material is adapted from her stand-up routine, which is even more surreal and amusing.

You can find a few more over on the YouTube.
No comments:

Normally I never find ALTER EGO more tiresome than when Roy Thomas shines the spotlight on his own work... 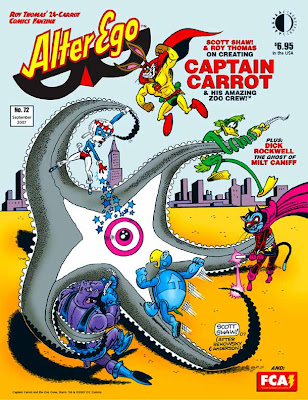 But for this, I'll make an exception.

(but I never want to see another feature on an unpublished retro-golden-age revival)
No comments:

At the bookstore today I noticed a recently released comic I hadn't heard of, DEAD HIGH YEARBOOK, a hardcover comic made to look like a high school yearbook and featuring several teen-oriented horror stories. Notably, the table of contents was largely made of creators I know from the old Milestone Comics line of the 1990s, including Ivan Velez, Wilfred, ChrisCross, John Rozum and others. The book is a bit pricey for the page count (although very well designed), so I figured I'd try to find out a bit more about it before picking it up. Anyone read this? Worth a look, or a bit too teen-oriented?
No comments:

Con report - The Day After

I'm really regretting not making more of an effort to get that SCRIBBLY issue.

And more 1970s Charltons, both with and without Ditko.

Here are the other two David Day pieces I picked up. 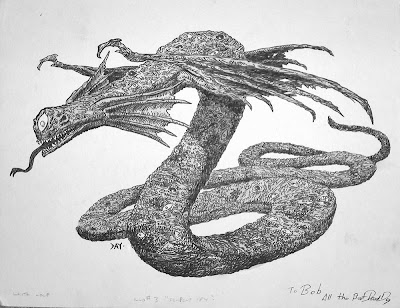 "Serpent Spy" is for some White Wolf thing, a role playing game, I guess. You can only barely make it out in the scan, but there are eyes embedded throughout the scales. 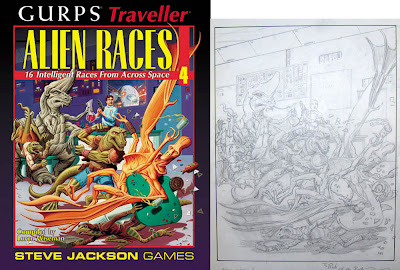 This is a detailed pencil version for the painted cover of ALIEN RACES 4 from Steve Jackson Games, as I just looked up on the prestigious internets. Nice large piece (image area is 10x13), and with dinosaurs being a part of most of the other original art I have, a quick buy for me.

Seriously, if you go to the convention tomorrow and don't go right up to Day's table and check out his work after seeing these, I'm not sure why you're reading this weblog.
No comments: 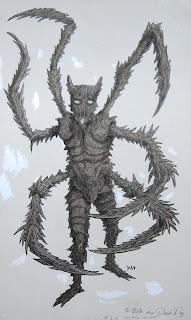 I went to the first day of the Paradise Toronto Comicon today, the only day I'll be going. The show continues for two more days, which will probably be a lot more eventful and crowded. I prefer the more relaxing pace of the less crowded day.

First thing walking into the hall that I noticed was Blake Bell. Seems I can't wander into a convention without running into him. After a short talk with him, I went to check out the artist alley section. Lot of guys hadn't set up yet (or were weekend only), but Marv Wolfman was there, with a short line-up. Wolfman was one of the main reasons I decided to go to the show, and I had brought a few things for him to sign, including my incredibly well read copy of NEW TEEN TITANS #1 from 1980. Wolfman's writing meant a lot to my younger self, so it was nice to thank him for it.

Looked at a few more tables, and came across David Day. He had a number of pieces of art, mostly from role-playing game and card work, available for an absurdly cheap price. I was a bit surprised at the work, not being too familiar with his solo work, and I guess associating him too much with his late brother Gene, he of the absurdly exact ink line. David's work is much more loose and organic, and I found a great piece that I mentioned to him would go great with some of the few other pieces of original artwork I have, dinosaur related sketches by Steve Bissette and Sam Glanzman. Turns out David was quite a fan of Glanzman (really obvious in the piece I got, which should be up top on this post), so I enjoyed talking to him about that. If you go to the show this weekend, I strongly advise seeking out his table and looking at what he has for sale. Great stuff at a great price (I went back and picked up two more pieces at the end of the day).

Later in the day the other guest I wanted to meet was at his table, so I got to say hello to Jerry Robinson, and pick up a signed print of a Joker sketch by him. Nice guy, and I got to thank him for the excellent COMICS - AN ILLUSTRATED HISTORY OF COMIC STRIP ART book that I used to take out of the library over and over, and he mentioned that the updated edition (which had been scheduled for last year) should be out later this year. O Frabjous day! Callooh! Callay!

Other than that, it was mostly bargain shopping. A few places were blowing out some overstock for $1 an issue (and sorted stock, not random like some bargain bins), so I was able to scratch a lot of itches cheaply that way. One dealer had some recent stuff that I was marginally interested in, but not at full price (several issues of DC's SOLO, the Philip Wylie adaptation with art by Russ Heath) or had heard good things about after the fact (AGENTS OF ATLAS, SPIDER-MAN/HUMAN TORCH) or just wanted to sample. Another had a lot of older stuff, including a massive amount of 1970s Charlton comics with Ditko art. I picked up about 50 of those and still had to leave a bunch behind. Fortunately, they have a store, and while it's a bit of a drive out there, it might make a good lazy summer trip. I also picked up some LITTLE ARCHIE digests, which should be fun.

Among non-$1 stuff (and I swear, there are like 150 books in that pile...), one dealer had a number of modern fanzines fairly cheap, so I found a few ALTER EGO and COMIC BOOK ARTIST issues I had missed or skipped, and another dealer had some great prices on recent graphic novels and collections, so I spent way too much on stuff that was on my mildly interested, get someday list. Don't regret any of it, other than the sheer mass of reading material I'm now facing.

I did look for a few more expensive back-issues, but didn't find much that I really wanted. I was sorely tempted by a fairly-priced low-grade copy of SCRIBBLY #2, but couldn't bring myself to break the $100 barrier in back-issue buying (although I know full well I'll have to someday if I want to get a run of SCRIBBLY).

So that was my day. Now my feet hurt, and I'm facing a mountain of books to sort through and read, but I'm happy. I liked the low key nature of the show, and the general comic focus (not heavy on screen and animation guests like some shows). I imagine the retailers would have liked bigger crowds, but hopefully those will come over the weekend. The crowd levels suited me fine.
No comments:

Nobody ever believes that this is a genuine, published in newspapers, Peanuts strip by Charles Schulz. Just you wait until THE COMPLETE PEANUTS v23 comes out and you'll see. It's an interesting display of Schulz's occasional fascination with THE GREAT GATSBY (I think there are several strips with references to the light on Daisy's dock and such things) and his obvious utter invulnerability to editorial input in the later years. Didn't someone tell him that this anomalous strip might not be a good idea (if you check the surrounding strips they're standard mid-90s Peanuts fare)?
3 comments:

One of those weeks...

Context tomorrow, not that it will explain much.
No comments: