I've been thinking about doing a couple of posts about the various formats of digital comics and the various strengths and deficiencies (mostly deficiencies) of each. Might still, but then this was announced which will probably do it better... 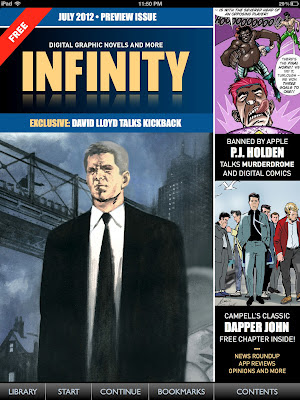 Russell Willis sends news that he's launched INFINITY, a new free bimonthly magazine from Panel Nine about digital comics, with a preview issue out now for the iPad, soon to be available as a PDF without some of the iPad specific features, and a formal launch in September. Panel Nine is the publisher of the digital editions of Eddie Campbell's DAPPER JOHN and David Lloyd's KICKBACK, so as you can see from the cover, part of the issue serves as a promo for those two books, with a sample chapter of DAPPER JOHN and excerpts from the interview with Lloyd that appears in KICKBACK. The whole magazine is a nice demonstration of the overall design sensibility of the Panel Nine books, so worth checking out for that. It's one of the few companies that brings a design philosophy beyond just images of printed comics, but still preserving the best aspects of the print reading experience. DAPPER JOHN is still the most enjoyable digital reading experience I've had (especially among longer works, where the table-of-contents, chapter structure and bookmarking really enhance the readability).

In addition to the Panel Nine promotional stuff, there's a detailed look at an older iPhone developed comic, MURDERDROME, which got into some controversy a few years back when Apple rejected it for some over-the-top violence. I didn't pay much attention at the time, since I didn't have the equipment to read it banned or not at the time, but the interview with artist P.J. Holden is interesting, as are his various thoughts about the technical aspects of digital comics and how they're being developed. 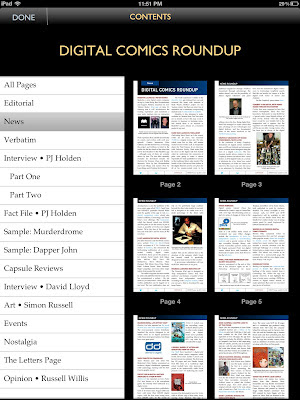 The preview issue also has a collection of recent news on other digital comics and some reviews. Perversely, the most interesting thing to me was the almost exact opposite of digital, a look at the original INFINITY, a small press fanzine Willis published in the mid-1980s, with contributions from many of the most interesting British creators of the era, including Eddie Campbell, Bryan Talbot, Alan Moore and David Lloyd. Hope we see some more highlights of that in future issues.

Anyway, worth checking out. Since I got an iPad a few months ago, I've been thinking a lot about the various formats for reading comics. Almost all of them are much more satisfying than reading on a computer screen, but most of them are still far from ideal, a lot more thinking has to be done on how the technology can be used to enhance the reading experience. I find myself mostly in sympathy with the views that Willis has, so I still think that DAPPER JOHN is the gold standard. Of the major platforms, Comixology provides a fairly decent experience, especially for shorter works (which I'd define as under 50 pages). Fortunately on a high resolution screen their "guided view" is mostly unnecessary, since it often seems to be pretty poorly thought out if the layout is more complicated than a simple grid. I guess some people are still trying to read comics on phone screens as small as 4 inches for some reason and need to deal with that guided view, as inadequate as it is. I'd probably rank Dark Horse's app next, fairly straightforward, but a little buggy. iVerse is quite a step down from that, I wouldn't buy anything there if i didn't have an option to go elsewhere, which fortunately hasn't come up yet. And it's especially irritating when you open the app you're usually greeted with those awful Tarot comics in the featured area (presumably since those are as close to a major book that's iVerse exclusive?). And Apple's own iBooks is just not designed for comics at all, it's a prose reader designed to incorporate occasional illustrations, and has too many unnecessary stylizations trying to make the screen look like a print book. Awful reading experience. The Kindle app was recently upgraded so that some of the comics available on Amazon for the Kindle Fire should work on the iPad, but there's nothing up there so far I'd want to buy. I looked at a few samples, and it looks like it might be acceptable, about on par with Dark Horse's app. Their "panel view" looks like it's slightly more thought out than Comixology's version. The Kindle format should allow for some of the chapter structure that I want for longer works, but I don't know if they actually use it.

There are also a few other comics done as standalone apps, which is actually the format I'm hoping takes off for longer works. Nothing really stands out among them, a few go way over into the "motion comics" side, with animation and audio so they don't really qualify as comics anymore. Some get way too cute with the navigation, making them almost impossible to read.

I've also been playing around with various ways to read public domain scanned comics. There are quite a few readers for those, each with its own quirks. I think I've settled on one called iComix for now.

Anyway, should be an interesting few years while all this shakes out.
No comments: