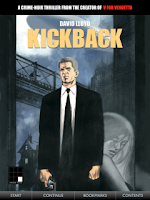 KICKBACK was the first major solo comic book work by David Lloyd, best known as the co-creator of V FOR VENDETTA. It was originally published in French by Editions Carabas and the first English language edition came out in 2006 from Dark Horse. Earlier this year it was released in a digital edition for the iPad by Panel Nine, their second release after Eddie Campbell's DAPPER JOHN, including the original 92 page story and various extras.

It's an entertaining little crime story about Joe Canelli, a somewhat corrupt but fundamentally good cop in a city where corruption is the rule, and the complicated web he finds himself in when those rules start to change around him, also bringing in some secrets from his past. 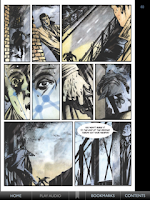 Of course the main attraction is Lloyd's artwork, which is always a welcome sight. It's perfectly suited to a crime story, with expressive faces and a good use of layouts to pace the story, especially in the frequent scenes with minimal dialogue. I'm not sure I was really sold on some of the more obvious uses of digital effects in both the art and the colouring (also done by Lloyd). A lot of uses of blur effects and photographic drop-in backgrounds. Those tended to call attention to to the effect more than they enhanced the story, especially with Lloyd's very organic linework. Some of them worked, and I'm sure that Lloyd will get better with the tools as time goes on, but at this point I'd have preferred the classic Lloyd look. Of course, I'm one of those still hoping we'll someday get a proper black&white edition of V FOR VENDETTA... 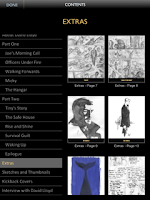 Among the extras are several pages of thumbnails, layouts and character designs, a cover gallery of the various previous print editions of the book in various languages and an interview with Lloyd about the history of the project, his process in creating it over several years and his disappointment over the marketing of the prior English publication. Some enjoyable stuff for those interested in the process of creating comics and the state of the market. Lloyd also provides audio commentary for many of the pages. I've listened to a few of them, and there seems to be some interesting stuff in there, but it didn't quite work for me. Come to think of it, I don't know I've ever listened to a commentary track for a movie on DVD all the way through except for THE USUAL SUSPECTS, and even for those I listened to in bits and pieces (usually just for especially good or especially perplexing scenes) I prefer it when there's more than one person doing the commentary, so it's a conversation rather than a monologue. The implementation seems pretty good though, with maybe a few tweaks needed, so it should be interesting to see in on some future books.

Well worth checking out if you missed the original print version. You can check out samples in Panel Nine's digital comics magazine INFINITY. As I've talked about before, the Panel Nine format is the best one I've tried, especially for longer form works, with a lot more thought placed into the layout and reading experience than others.
No comments: