A wholly inadequate farewell to George Carlin. A version of the "Stuff" routine below is the first clear memory of Carlin I have.

"Have you noticed their stuff is shit, and your shit is stuff?"

EC - Sinking of the Titanic (Wood)

No big surprises in this vintage EC science fiction story. A scientist manages to perfect a time machine, and his thoughts go back to the day when he was six years old... 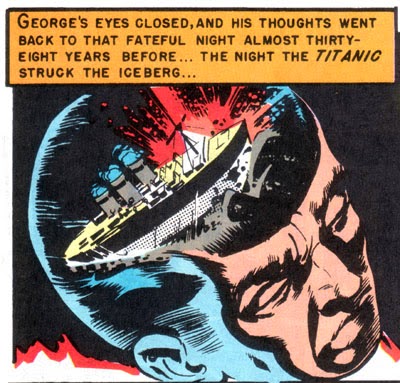 ...and lost his parents on the Titanic, only barely surviving himself thanks to a stranger taking him from his mother and putting him on a lifeboat. Yeah, you know at least one of the twists already. He goes back to 1912 and books a trip on the ship, meeting his parents and his younger self. In trying to prevent the crash into the iceberg, he ends up causing it, and just manages to save his younger self before sinking beneath the waves with his guilt. Wow, both predictable twists in one.

Some pretty good work by Wood, especially in the lush depiction of the sunken ship on the title page and the weird "flashback in the head" like in the panel above.
No comments: