EC changed GUNFIGHTER to HAUNT OF FEAR with this first "New Trend" issue (adjusting the numbering a few issues later with #4) and leading with this heavily Poe-inspired story by Johnny Craig.

This is the story of Neal Harper, whose once happy marriage to Clara was strained by the arrival of the cat Snooky, who Clara spoiled to the anger of Neal. Neal finally snaps one day, and attempting to kill the cat accidentally kills Clara. He decides to seal her body behind a brick wall in the basement, and after he finishes the wall is unable to find the cat and figures it was behind the wall.

Then, in classic Poe fashion, he begins to have nightmares about his dead wife and the cat, and when he tries to take a drink to calm his nerves...

...delivers a classic spit-take when he hears the cat. The soon constant sound of the cat drives him crazy, so he puts a hole in the wall to reach in and kill the cat, only to have his arm trapped by the cat's claws. His screams bring the police, who tear down the wall only to find that nothing was holding Neal's arm at all (as the cat then walks in with kittens) but revealing the dead body.

Not the most original story, but fairly effective, and has a lot of the EC crime comics staples of disposing bodies and justice delivered by a guilty conscience.
No comments:

I was sorry to hear that Dave Cockrum passed away, at the far too young age of 63 after several years of illness. I enjoyed quite a bit of his work over the years. Here are a few examples from books I pulled out to re-read today.

Sky-Wolf was a pretty fun attempt by Cockrum and Marv Wolfman in 1984 to do a Marvel version of the Blackhawks (which I think they were briefly slated to do at DC a few years earlier, following a Batman team-up they did together. That became the Evanier/Spiegle revival, which Wolfman briefly edited and Cockrum drew some covers and backup stories). 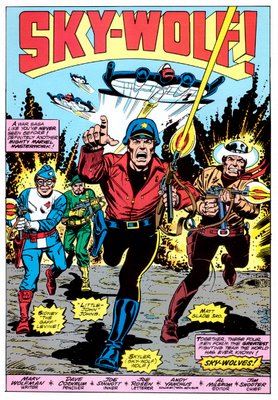 One of the last regular gigs that Cockrum had was a long stint on Claypool's SOULSEARCHERS AND COMPANY, which had a lot of opportunity for him to show off some of his expressive humour work and lots of outlandish creatures and situations. 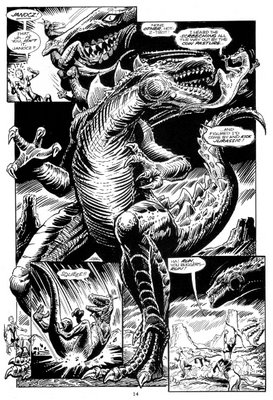 And of course there's X-MEN. One of the few times I regularly read the book was during his second stint as artist in the early 1980s, which had a lot of fun stuff, including the very goofy #153 "Fairy Tale" issue. It wasn't until years later that I read reprints of his original run, which was also fun. 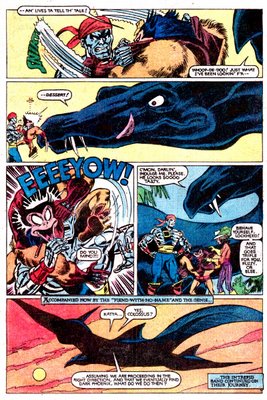 One of the series of posts I was doing here that kind of fell by the wayside the past few months was a look at each series that makes up my over-large comic collection, in roughly the order of how many issues I had (an order that's been changed somewhat by recent purchases). Previous entries in the series are here. Anyway, a few months ago I'd gotten as far as this...

This anthology was Dark Horse's first comic book, running until #157 in 2000, and always a good sampling of whatever kind of stuff Dark Horse was publishing at the time, with a mix of single issue stories and continuing pieces. I was, obviously, never a regular reader of the book, usually only picking up an issue or two in a row if something caught my eye.

Those multiple #100 issues, by the way, was how they celebrated reaching that milestone, with five issues worth of material, all self-contained, so it made a good sampler of what was going on at the company at the time.

I can't judge a lot of the contents since there are so many single chapters of longer stories, but the there's a nice variety of art in them, and a few of the longer pieces look good enough that I should really find out if there was ever a collection of them published. The most interesting stuff in most of the issues I have is the Eddie Campbell stuff (more easily available in his self-published books now) and the Concrete stuff by Paul Chadwick (all reprinted in various books, I suppose).

Some other random noteworthy stuff:

It's far from brilliant, but the "Bob the Alien" comics by Rich Rice that appears in several issues still cracks me up.

Not sure what else he's done, but someone named Gary Davis has a few stories that I have loose chapters of ("Delia and Celia" and "Paleolove"), and the artwork in them is gorgeous.

#118 - #120 feature a three-part "Hectic Planet" story by Evan Dorkin, continuing from his old "Pirate Corps" series. Don't think we've seen the characters again in the decade since, or even a reprint of this story.

#120 also has one of the last times I've seen Al Williamson doing full art on a comic book story, instead of just inks, on the great "One Last Job", written by Mark Schultz.
No comments: 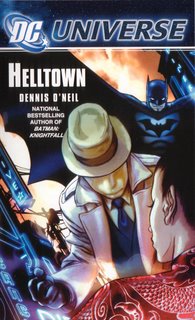 HELLTOWN is a recently released novel by Dennis O'Neil, a prose version of the story of Vic Sage, the Question, that O'Neil wrote in comics form back in the late 1980s. As I've mentioned before, that series is one of my favourite comics, so I had to check this out. It's a little odd, parts of it work really well, some work well because they resonate and expand on stuff in the comics. Other parts would probably work better to someone not as familiar with the original comics, as the prior knowledge only makes the differences more distracting. Overall I did enjoy it, but I'd probably suggest that anyone interested check out the first year of the comic (which I wish they would reprint, but back issues aren't that hard to find at a reasonable price) before reading the novel.

For the most part this story follows the first four issues of the comic, with the major change being that while the comic book had Vic Sage already having long since adopted the Question identity and being an established reporter, in the novel he's freshly returned to Hub City at the beginning, and becomes a reporter and meets the supporting cast and only adopts the Question mask and identity after his encounters with Shiva and Richard and (in a greatly expanded role) Batman. It also borrows some later story elements (most notably the buried alive story), as well as adding a lot of new stuff that veers pretty sharply from the original story.

I can see the reasons for this, especially the increased Batman, but I probably would have preferred an adaptation that hewed closer to the source material. I liked the feeling in the original that there was a long prior history of the characters and the Question identity, and don't think the character suffers at all from not having an origin, and the storyline works better as a turning point than a beginning.

The parts of the book that do work, in particular the scenes with Vic interacting with Richard and with Aristotle Rodor, are really good, O'Neil at the top of his game stuff. If you're a fan of the original comics it's worth reading the novel for those alone. Some of the other characters don't come across as well as they did in the comics, in particular Myra kind of gets the short end of the stick since her best scenes came later in the series, and I'm sorry that Izzy O'Toole doesn't find his way into the novel at all. So a bit of a mixed bag, overall, but solidly entertaining.
No comments:

Mark Evanier reports that Jerry Bails, one of the founders of comic book fandom, passed away last night at age 73. I had a few passing e-mail exchanges with Jerry a few years ago, and he was never less than helpful in getting me some information I needed. More than that, I really respect the passion he put into his appreciation of comics, especially in terms of making sure that the uncredited creators of the early days got their due, got their names associated with their work and remain known to this day. Thank you, Jerry.
No comments:

A few comic book related links you might want to check out.

Steve Thompson's BookSteve's Library has a page from WONDER WOMAN #2 featuring a photo of the creator's behind the book, including editor Sheldon Mayer.

Mike Sterling's Progressive Ruin has some thoughts and images of Richie Rich's excesses.

Will get back to some stuff on comics soon, I suppose.

Before that, I noticed that one of the last of my infrequent posts in the past few months was saying good things about STUDIO 60 ON THE SUNSET STRIP. I won't retract what I said, I still think the pilot was some real good stuff, but wow has it gone downhill since. I still like the occasional scene, and the acting is mostly pretty good, but that did not turn out to be the show I was hoping for. A lot of the characters just don't seem to exist in any sort of reality, just being there to deliver lines that set up some point that the script is trying to make, and even those points come across as either vague or uninspired or ludicrous. I think I'm pretty much done with the show for now, maybe I'll check back in a few months from now to see if they find the talent of the guy who wrote SPORTS NIGHT and THE WEST WING.

Otherwise on TV, I still think THE OFFICE is pretty good, although I'm glad they finally wrapped up the split office thing and brought Jim back to Scranton. Though that does put a pretty large cast in one location. I do like a lot of the new cast (in particular Ed Helms' character), so it'll be interesting to see how those new interactions work out.

I still watch PRISON BREAK for some mindless fun, although it's gotten on thin ice the last few weeks. I think they just have too many episodes to fill for the amount of story they have, so it take forever for something to happen, which also tends to draw more attention to some of the more glaring plot holes. I think it's supposed to be going on a mid-season break soon, so I'll see if I still care when it comes back.

And I'm mostly enjoying the DAILY SHOW / COLBERT REPORT combo, except that for the most part the interviews on both shows lately haven't been too interesting, and I find myself fast-forwarding through a lot of them after a few minutes. Not sure if they've changed or I'm just a bit tired of the shtick, but the early part of each show is still pretty solid.
No comments: 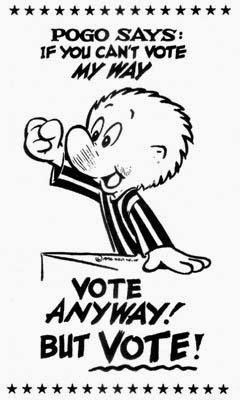 A gentle reminder to American readers of this weblog. Pogo doesn't run in mid-term elections, of course, but hopefully you can find someone almost as qualified. Or maybe not...