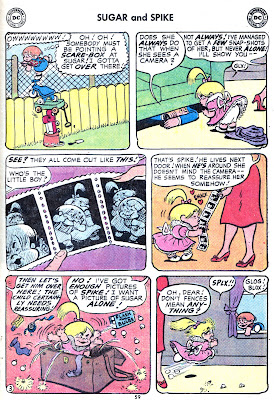 Among many highlights of the book will be this story from the second issue, where Sugar's mother hires a photographer to get a decent photograph of her alone and not crying.  You see, a traumatic early incident with a joke camera has left Sugar with a fear of cameras, which is only abated by the presence of Spike making funny faces. Spike hears the fuss and comes to Sugar's rescue, and various misunderstandings occur until the photographer finally manages to snatch defeat from the jaws of victory.

A great little story, one of the best of the over 400 Sugar & Spike stories Mayer wrote and drew (and may we one day have a whole shelf with books collecting every single one of them). Mayer was especially on his game with the body language in this story, in that page above I especially like Sugar lecturing the photographer for daring to pull a camera on her, her affection towards the photos of Spike and her excitement at him coming to the rescue.

IZNOGOUD is a long-running comedy series created by René Goscinny and Jean Tabary, published in France beginning in the 1960s, continued by them until Goscinny's death in 1977 and then handled by Tabary solo. I'd heard about it some twenty years ago, and being a fan of Goscinny through ASTERIX (avec Uderzo) and LE PETIT NICHOLAS (avec Sempé) I was curious, but apparently at that point there was nothing readily available in English. It was only after Tabary's recent passing that I found out British publisher Cinebook had been publishing English editions of IZNOGOUD since 2008, with eight books in print. I decided to try the first three, despite the fact that I wasn't that impressed with my most recent foray into reading old Goscinny as an adult, a few volumes of LUCKY LUKE (avec Morris). I ended up liking this a lot more. It's no ASTERIX, but then asking anything to be as good as a series I fell in love with over 30 years ago is a tall order. 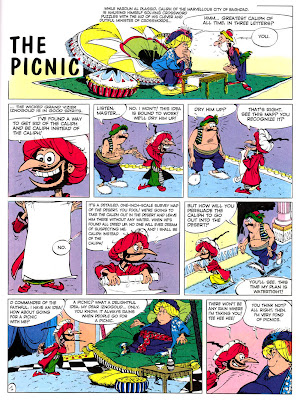 Iznogoud is the star of the series, the evil Grand Vizier of Baghdad in some vague non-historical "Arabian Nights" period (and all the cliches that entails, including genies and flying carpets), serving a good-hearted Caliph. Apparently the series actually began starring the Caliph, but soon after Iznogoud emerged as the star with his schemes of taking power, or as he constantly says "I want to be the Caliph instead of the Caliph". The only other regular character so far is Iznogoud's aide Wa'at Alahf, who often tries to talk Iznogoud out of his schemes, but reluctantly goes along, usually hindering as much as helping.

Unlike ASTERIX and LUCKY LUKE, each book contains several short stories, most of them 8-10 pages, with one 20-page epic in the third book (apparently in the post-Goscinny period there were longer stories). All of them involve Iznogoud coming up with some elaborate scheme to take power (up to and including plots to assassinate the Caliph), with everything constantly backfiring on him, despite the fact that he has the Caliph's full trust (as apparently the only person in Baghdad who doesn't know about Iznogoud's desire to be Caliph).  I suppose the repetition could get tiresome after a while, but it's still fresh after these fourteen stories (which aren't published in any particular order, and range from at least 1963 to 1972 based on the signatures), with endless variations on the theme, including time machines, magic frogs, election fraud and trips to the desert, the beach and the ocean. I especially like the plan to leave the Caliph to die of thirst in the desert in the first book, which has a lot of unexpected turns, and the story in the third book where Iznogoud finds an obscure law which allows anyone to challenge the Caliph to a fight, which has a great twist.

The books aren't perfect, of course, especially if you aren't that fond of puns, and of course the unfortunate bits of racism you see in a lot of old comics (seriously, some of that stuff was acceptable even into the early 1970s?). But there's a lot to recommend them, and Tabary's art is especially good, coming pretty close to matching Uderzo in his prime. I think I'll probably get at least a few more of the books.
No comments: 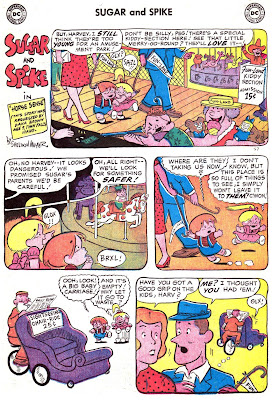 The Wilsons take the kids to an amusement park, even though Mrs. Wilson isn't sure they're old enough even for the "kiddy section".  Of course the kids manage to get loose, and soon find a baby pony. Of course, it being a baby means they can talk to it, since baby-talk is the same for all species, and the three of them go off on a little adventure around the park, which ends up being quite costly for the Wilsons.  That'll teach 'em to pay more attention when taking care of the kids.

Cute little story, I especially liked the presence of a lot of one-shot people (and animals), which gave Mayer a chance to show off some of his other cartooning skills.

"Boy! I wish my mommy was a baby pony! She doesn't understand a word I say!"
No comments: 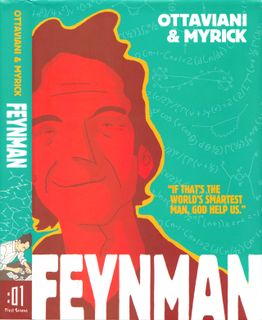 Jim Ottaviani has been doing comics about science and scientists for over a decade now, with various artists and mostly published through his own GT Labs imprint. I've been reading them for almost as long as he's been publishing them, and they've been consistently entertaining and educational. And none more for me than the sections in TWO-FISTED SCIENCE [1997] that dealt with physicist Richard Feynman. Those stories led me to read several of Feynman's own books, which were a delight and which I've gone back to many times over the years.

So I was more than a little excited to learn, at the 2010 Toronto Comic Arts Festival, that he was working on a new full length comic book biography of Feynman with artist Leland Myrick, to be published as a full-colour hardcover by First Second.  The pages I saw at the time looked really good, and when the book was formally announced it was right up there on my list of most anticipated books of 2011. Fortunately I ended up waiting significantly less time for it than I expected, as Ottaviani had advance copies at the 2011 TCAF a few months ago, and I was fortunate enough to win one. The book is now in general release, and I highly recommend it, both to those new to Feynman and those who are already familiar with his history. 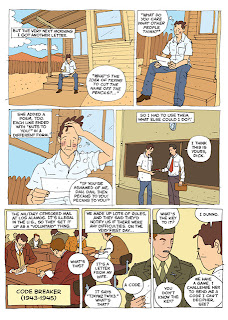 For those who are new to him, Richard Feynman (1918-1988) was a physicist who worked on the atomic bomb in the 1940s, won a Nobel Prize in the 1960s and played a key role in the investigation of the Space Shuttle Challenger disaster in the 1980s. He also led a colourful life outside of those highlights, and was able to tell his stories in an engaging irreverent and eccentric style. Ottaviani adapted several of the stories, mostly dealing with the 1940s, in TWO-FISTED SCIENCE. This longer work allows him to expand on those stories and add a lot more, building up a fuller picture of Feynman's life.

Even with 272 pages, Feynman's adventures were numerous and varied enough that Ottaviani can only hit the highlights, but he does a good job of picking the stories, giving enough of the context and letting Feynman's own words tell the story with the artwork. In addition to the science, there are stories of Feynman growing up, falling in love, losing his first wife, his friendships, the politics of the various situations he found himself in (from the secrecy of the atom bomb research days to his life in academia to the Space Shuttle investigation). For those who never heard these stories before, there's enough to be satisfying and extensive notes pointing out where you can find out more, and for those who have heard them before it's a nice refresher to see them in a new context. In particular the stories really come to life with Myrick's artwork, which is expressive and gives a nice feeling of the various times and locations.

I will admit that, twenty years removed from my last math/physics classes (and having used very little of that stuff in the interim), I found the brief parts of the books that deal with the actual details of Feynman's research a bit rough going, especially the first time through the book.  However, the book answers that problem through some advice that Feynman gave to his younger sister. 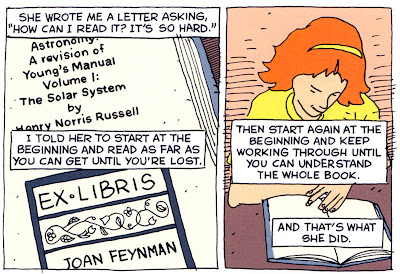 And indeed I picked up a bit more the second time through, and maybe someday I'll understand it all. Anyway, you don't need to have any aptitude for the physics to appreciate the bulk of the book, and even those brief bits where you do there's some visually interesting stuff to pick up each time through.

The publisher has a long excerpt of the book and more information over here.
No comments:

A little taste of what you'll see in the upcoming SUGAR AND SPIKE ARCHIVES, the second story from the first issue. Kind of an interesting look at Mayer's technique, as the basic gag of this story is the same as that used in the cover to this issue. With three times as much room to play with it, Mayer adds some nice visual bits, including the kids playing in the trashcan in the park, and also makes a lot more hay out of Spike's incredulity that Sugar was able to find a new and painless way of scamming some candy from her mother.

Characters: Sugar, Spike, Mrs. Plumm, Mrs. Wilson, Mr. Wilson
Damage: Not much, maybe Spike's pride and his faith in the power of books...


"They kept pulling my thumb outa my mouth, so naturally, I kept putting it back in!"
"Naturally!"
No comments: 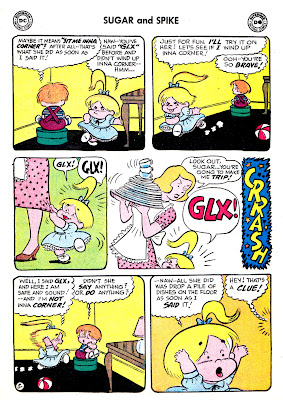 A classic look at the eternal failure to communicate theme that the series featured, this time the kids put some clues together and realize that their parents don't actually understand their baby-talk. Naturally their solution is to try to teach them, starting with the easiest word they know, "GLX", meaning "Hello". When that doesn't have the result they expect, they attempt to reconcile the various reactions they get to the word to figure out what it means in grown-up talk, but their perfectly logical conclusions only get them in more hot water.

Lervly story, especially the baby logic, and some wonderful expressions on the kids.  This also features one of my favourite S&S scenes ever, a bit where Spike helps Sugar escape from her playpen "prison", only to wind up in it himself, with the final reveal that they can just lift it up and get out anytime.  Throwaway bit that isn't even referred to in the dialogue, just a cute visual to enjoy on a second level to the main plot.

Characters: Sugar, Spike, Mrs. Wilson, brush salesman, various neighbours
Damage: Many, many dishes, a fruit bowl and a plant
Punishment: a sentence in the "pokey" (a playpen) and various trips to the corner

"I think that when we're talking good, clear baby-talk to them, they think we're just making silly noises that don't mean anything!"
No comments: 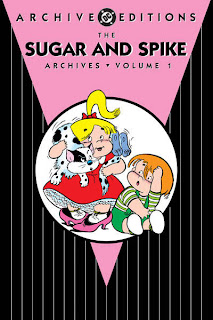 Just a quick reminder that Sheldon Mayer's SUGAR AND SPIKE ARCHIVES Vol. 1 is on the way from DC, probably with a cover looking like the one to the right.  September 14 is the currently advertised date for it to be available in comic stores, which can probably still order a copy for you using order code JAN110334. Other retailers should have it around then as well, use ISBN-10 1401231128 or ISBN-13 978-1401231125.

You can find a listing of previous posts about the series over here, in particular these entries on stories which will be in the upcoming book: