Still alive, if sometimes just barely. Today's ramblings, a weirdly random discovery of two almost 50-year old rebel songs thanks to a song which is not a rebel song, a great old fanzine cover by a true living legend of comics, a quick look at one of my favourite comedy podcasts and by far my favourite current TV show as it enters its final season. 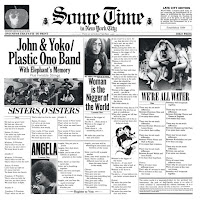 So, heard a U2 song in the car earlier today, and about half the time I hear U2 I immediately think of their singer Bono Vox's patter before a live version of "Sunday Bloody Sunday".

There's been a lot of talk about this next song.. maybe a little too much talk. This song is not a rebel song... this song is "Sunday Bloody Sunday".


For some reason that always cracks me up (I think it's regularly mocked on the "Never Not Funny" podcast by Jimmy Pardo, and might have been joked about on "U Talkin' U2 To Me?" by Adam Scott Aukerman, but my amusement at it definitely predates both of those) . So I decided to do an internet search for "Is Sunday Bloody Sunday a rebel song". Not sure what I expected to find, but I did not expect to find out that John Lennon had a song called "Sunday Bloody Sunday" from 1972, shortly after the actual January 30 "Bloody Sunday" of that year, and a decade before the U2 song. For a few seconds I wondered if I was the last person to find out that U2's song was a John Lennon cover, but quickly found out that it was a completely different song that I had never heard of before. And I give thanks that I found out about this in 2019, because a few years ago it probably wouldn't have been so easy for me to listen to it.

And hey, guess what? Rebel song!

You anglo pigs and scotties
Sent to colonize the North
You wave your bloody Union Jack
And you know what it's worth!


It's a bit of a mess in the production, lots of Phil Spector and Yoko Ono and all that entails, but I like it, and can dream of a more stripped down version.

And the revelations keep coming as I found out that, surprisingly, Paul McCartney was there even before that, and eschewed all subtlety on his position with "Give Ireland Back To The Irish".


I think we're going to have to go with "rebel song" for this one as well. Also, like just about anything by McCartney with Wings from the that era, over-produced mess of a song, but still pretty cool and you can feel the heart of a good song underneath all the layers.

So this was kind of a cool day, in a musical discovery sense. 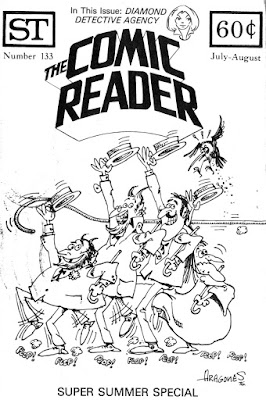 From the Fanzine Cover Files, let's take a look at THE COMIC READER #133 [1976]. Sergio Aragonés provides a great cover image featuring himself and the various DC horror hosts, at the time doing double-duty as hosts of the humour magazine PLOP, but clearly the hook indicates that title wasn't long for the world (and indeed the final issue was published around this time). Pretty amazing how consistent Aragonés' work has been from this work 43 years ago (and indeed from over a decade before then) to today. Not sure if any other comic artist has been so steadily great for so long.

Nice issue of the long-running fan magazine, founded in the early 1960s by Jerry Bails and by this time edited by Mike Tiefenbacher and Jerome Sinkovec. Besides some news and letters there's a good history of Gold Key comics with a long list of their publications, a short comic story and a long amusing interview with Jim Warren on his company (with a rebuttal by Marv Wolfman). I especially like Warren's referring to Stan Lee as "Mr. Presents", which I do sometimes (not sure if I picked it up from here or somewhere else. I'm thinking maybe Roz Kirby called him that once somewhere). 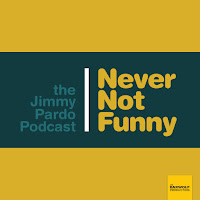 On the podcast recommendation front, as mentioned above I'm a listener of Never Not Funny, Jimmy Pardo's podcast, which has been running for something like 13 years. I haven't been listening that long, I started maybe around five years ago, though I subsequently listened to most of the earlier stuff. It is, as it says on the tin, always funny, and frequently hilarious, with a lot of great guests who fit in well with the general conversational tone of the show. There are two episodes a week, one available for free on Earwolf (the most recent is the second appearance of Paula Poundstone, and is highly recommended). The second requires you go to their website and join the "Players Club", which also gets you the option of a video version of both weekly episodes, which isn't essential (the show works fine in audio-only) but often adds something to the hi-jinks (the recent spontaneous outbreak of a limbo contest, for example). I've discovered a lot of great entertainers from their guest spots on the show, and a lot of other things besides (I can directly trace my obsession with the play Hamilton to the frequent discussion of it on the show a few years back). Check it out. 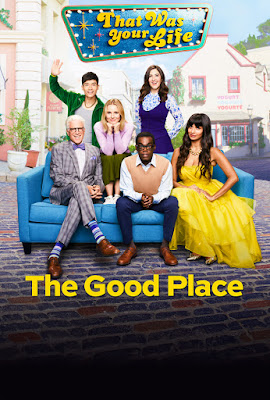 Well, let's finish up this time with some TV. For the last week for me that's pretty much meant THE GOOD PLACE, non-stop. I really do love that show, I've watched every episode multiple times, often in random order, and have been devouring all of the supplemental material that they release on-line, which thankfully there's a lot of (including the official show podcast by Marc Evan Jackson (he plays Shawn)). I don't want to post too much about it right now, but fair warning that there might be long posts about it full of spoilers in the coming weeks, as the final season starts in just a few days (and I'm hoping that lasting only four seasons and ending on its own terms means that it'll avoid the disappointing finale syndrome that most TV shows fall victim to. What was the last great TV show to end as a great TV show?).


If somehow you've gotten this far without knowing anything about what happens on the show, definitely start checking it out now.

And that's a wrap for this time. Coming up, more on some of the long-running serialized comics I'm reading (including a few new ones added to the mix), more random comics pulled from the boxes, maybe some other stuff.
No comments: