Happy Easter and some links

Still surprises me that the Milton Caniff's work is so popular that there's a whole day set aside to celebrate Steve Canyon's sidekick, Happy Easter. 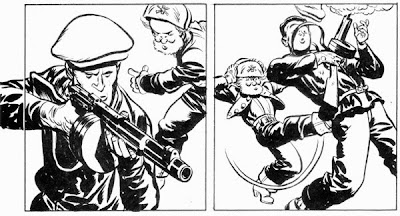 Meanwhile, all Steve gets is a big hole in Arizona named after him.

Ty Templeton makes sure we don't forget the true meaning of Easter, violence and rabbits.


A little seen Swamp Thing cameo by George Perez.  Hey, Swamp Thing was there at the first Easter.  Sort of...

Rick Veitch draws Doctor Strange.  That has nothing to do with Easter.  Well, Veitch did write a story about Swamp Thing at the first Easter.  Sort of...
No comments:

Hm, I don't buy a lot of on-going comics, but here's one coming up from Bongo that I'm really tempted by... 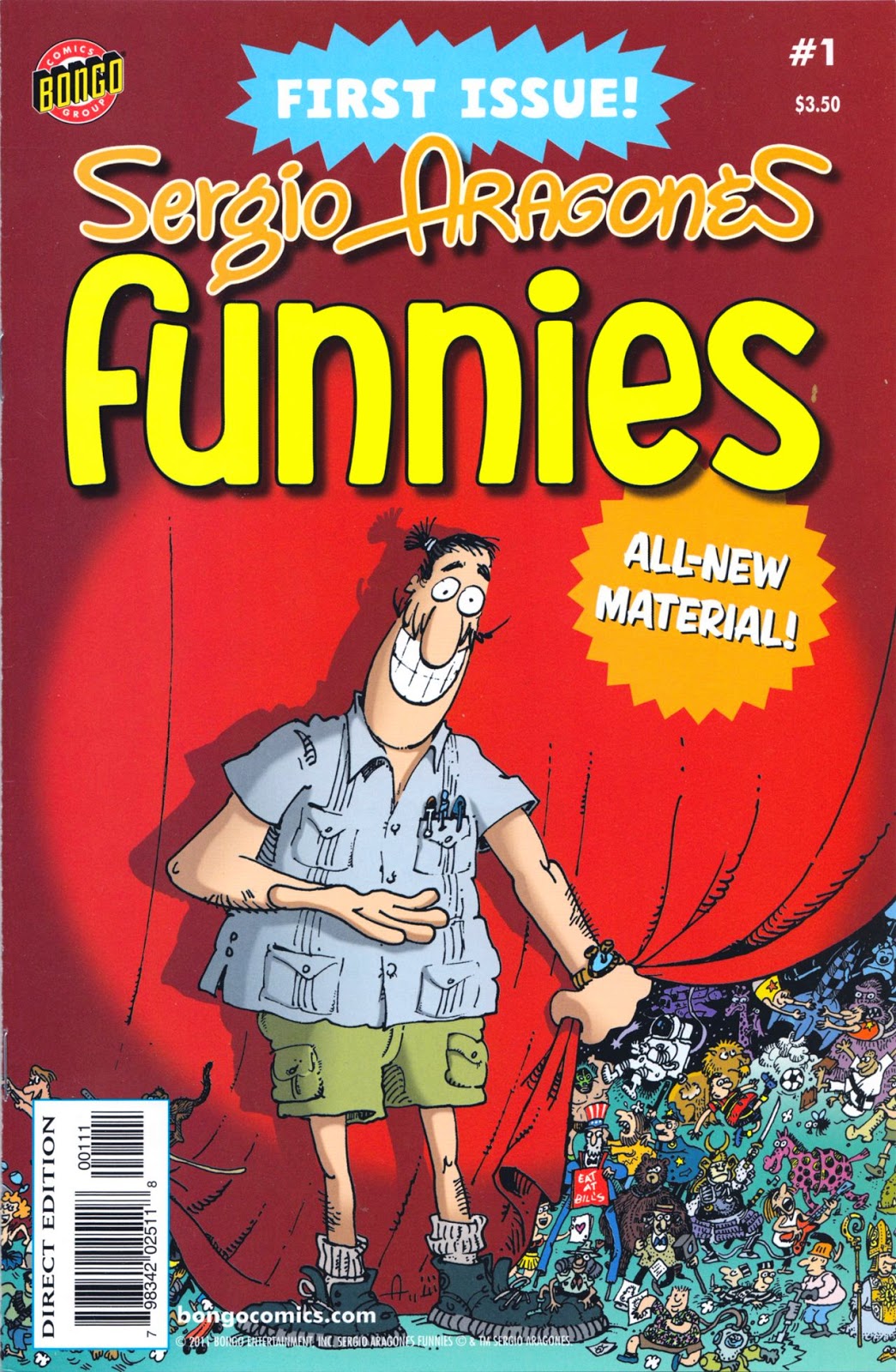 SERGIO ARAGONES FUNNIES #1
By Sergio Aragones
Matt Groening proudly presents an all-new monthly series by the world's most famous and most honored cartoonist, Sergio Aragonés! Each issue offers an assortment of autobiographical anecdotes, perplexing puzzles, slap-happy short stories, as well as Sergio's unique and hilarious pantomimes and gags. With this new series, the world's most beloved cartoonist continues to prove that humor is truly a universal language!
No comments:

The "King Hell Heroica" is the collective name for an unfinished series of inter-connected super-hero comics created and published by Rick Veitch, starting with BRAT PACK in 1990 (retroactively Book Four) and continuing through THE MAXIMORTAL (Book One) before ending, for now, with two issues of the BRAT PACK / MAXIMORTAL SUPER SPECIAL in 1996/1997.  The specials outline the projected full Heroica at the time, including two more books set between the existing books (BOY MAXIMORTAL (Book Two) and TRUE-MAN, THE MAXIMORTAL (Book Three)) and several more specials providing a meta-textual bridging structure and final conclusion to be collected as Book Five of the Heroica.

I read BRAT PACK as is came out and got the collected edition of THE MAXIMORTAL several years ago, but somehow missed the two Specials and didn't have too much luck finding them.  The recent publication of TEEN ANGELS & NEW MUTANTS, Steve Bissette's book-length treatise on BRAT PACK, gave me the impetus to finally pick up the collected edition of BRAT PACK (which is heavily revised from the original serialized version I'd read) and as fortune would have it I was able to find the Specials as well.  So, before getting to TEEN ANGELS I decided to (re-)read the published Heroica.

I guess there are multiple choices of where to start.  I chose to go with the published order, and start with BRAT PACK.  Originally a five-issue series, the collected edition makes several changes (dating back to the original collection in 1992, and which I see are helpfully outlined in an Appendix to TEEN ANGELS).  The major changes are some new scenes between each of the chapters, and a complete overhaul of the final chapter, with a new script and many art changes.  It's very odd reading the new stuff after living with the original through two decades and several re-readings.  I can see why Veitch made the changes, and I never was that happy with the original ending, always feeling that Veitch uncharacteristically pulled his punch at the last minute.  Plus the new ending makes the whole story fit better in the larger structure of the Heroica, if it's ever completed.  It's going to take me a while to digest the changes, but I think they're an improvement overall.

Anyway, I'm sure most people reading this far already know the general concept of BRAT PACK.  It's a cynical look at teen super-hero sidekicks, with ersatz versions of all the common archetypes that have populated American comics since the 1940s.  That's a rich field to plant a cynical take in, starting with the whole idea of adult heroes taking underage children out to fight crime, moving through the homoerotic overtones that many have found in the Batman/Robin relationship and culminating in the ultimate expression of cynicism, the "vote to kill Robin" gimmick published by DC not long before the original publication of BRAT PACK.

It's a variation of that last bit that Veitch opens with, a radio show in the city of Slumburg where the teen heroes of the city are mocked and vilified, leading to their death at the hands of Doctor Blasphemy.  The series then follows the recruitment and training of the inevitable replacements at the hands of the adult partners. A very dark and funny take on decades of super-hero cliche, even with the original ending it's always been among my favourite of Veitch's works. And as cynical as it seemed then, I think the path that super-hero comics have taken in the last two decades have pretty much vindicated Veitch's cynicism, to the point that parts of it no longer even feel like parody. Fortunately in the revised version, that final punch is no longer pulled, making it still vital and biting in this more cynical world.

It's not all about the parody, of course. Veitch creates some strong characters in his variations on the archetypes, with some really strong designs and artwork, and as he often is in his work he uses page design and structure to good effect, in this case often dividing two-page spreads into four half-pages, one for each sidekick, using the parallel structures to compare and contrast their stories.

THE MAXIMORTAL was originally serialized in seven issues, which I didn't read (partly because I'd heard of the major revisions made to BRAT PACK in the collection).  I don't think there were any similar changes made in this series, except that the originals were in colour, while the collection is in black and white.  I'm sure the colour was well done, but I don't miss it, and this fits in better with the rest of the Heroica.

The Maximortal of the title is True-Man, the Superman analog of this universe, who plays a minor but key role in BRAT PACK (moreso in the revised version).  His story winds up being intertwined with many aspects of the 20th century history, from an explosion in remote Russia to the development of the atom bomb, plus stories based on the history of super-hero comics, with fictionalized versions of the creators of Superman, Jerry Siegel and Joe Shuster (hopefully Veitch has fixed the spelling of "Shuster" in his closing essay in later printings).

I always thought MAXIMORTAL was a more uneven work than BRAT PACK.  It definitely has moments of brilliance, and gets points for never giving you what you expect, but overall it never felt like a cohesive work.  I suppose part of that might be that it's not, with those two book in the series left to do.  Still, there are some great parts, and I like the book overall.

And that brings us to the stories that are completely new to me, the two Super Specials.   These stories add an additional meta-textual level to the whole series, while also serving as bridging material between the books.  The first one expands on the ending of BRAT PACK, in particular the villain Doctor Blasphemy, while also looping around to provide the introduction to THE MAXIMORTAL, and the second bridges the gap between the end of that book and the beginning of the as-yet-unpublished BOY MAXIMORTAL.  Again, I have to commend Veitch for never doing what you'd expect, but have to withhold judgment on whether all of it works since, even more than THE MAXIMORTAL these are bits of an unfinished whole.  I am glad I finally tracked them down, though.

Well, those are some quick initial thoughts.  Look for more in a week or so after I finish TEEN ANGELS.

[took a bit longer than expected, but here's the TEEN ANGELS review.  Makes me want to re-read the entire Veitch catalog leading up to the Heroica before my next re-reading, after which I may get to that follow-up post]
2 comments:

94 years ago today, Sheldon Mayer was born. How do Sugar and Spike feel about that? 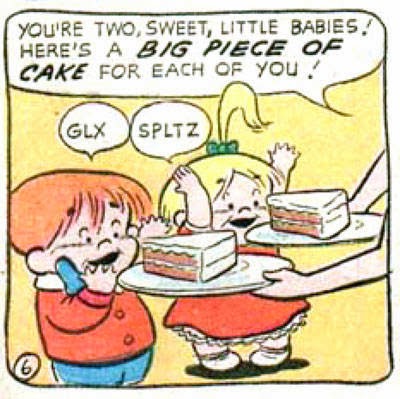 It's always about the cake with kids, isn't it?  This year, of course, in addition to the cake his virtual kids can join us in celebrating the upcoming release of SUGAR & SPIKE ARCHIVES v1.  Just don't let the kids get too close to the book unattended, they'll probably try to eat it...
No comments: