Turning the rusting crank on the old weblog machine...

Maybe that should be the name of this weblog.

Time for one of those infrequent attempts to get posting on here more often, this time spurred on by my displeasure over most other on-line venues. One recently went belly-up, taking with it years of discussions. Most others I find to be problematic on a technical, aesthetic or political level, often all three. Thinking back, I realized I was most satisfied with ol' blogger (although there are some political questions with the parent corporation) for my particular needs, which are mostly to get things down for my own personal later reference, and if those thoughts manage to entertain or inform anyone else that's an agreeable but ultimately non-essential side-effect. So I figured I'd try using it for a little while while I explore alternatives, maybe prepare to migrate whatever content from the archives is worth saving to the alternative in the future. Right now I'm thinking occasional omnibus posts with short comments on various subjects interspersed with longer articles on specific things I want to write about, and eventually bringing in a few of the regular features I used to have.

Some housekeeping, I've changed the layout because something in the old one was apparently causing the page to load very slowly on some systems. If anyone is still reading, feel free to let me know if there are any problems with the new layout, and have some patience while I do some tweaking around the edges. 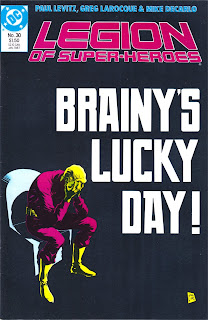 I've remained mostly on a moratorium on acquiring any newly published paper, comic book or otherwise, for the last little while, with some exceptions which I'll probably discuss sooner or later. I do still pick up quite a few back-issue comics if the price is right (rarely going over $2 a single issue or $10 for a collection) and it fills in some hole in my collection.  Lately that's meant a lot of 1980s DC stuff, finally completing a run of OMEGA MEN, coming close on NEW TEEN TITANS, LEGION OF SUPER-HEROES, THE OUTSIDERS and ACTION COMICS WEEKLY, and for $5 I wasn't going to say no to the SQUADRON SUPREME collection, even though I have the original issues, as that 1980s Marvel printing doesn't age well, and it has the CAPTAIN AMERICA crossover issue I was missing.

For new stuff I'm mostly relying on the local library system, which has a pretty great selection of print books available, plus through the Hoopla and Libby apps a very large collection of digital comics.  Plus I'm occasionally buying stuff digitally on sale or though deals like Humble Bundle. I've gone digital on the last few serialized holdouts I was getting in print, GROO and USAGI YOJIMBO, and get a few other serialized comics when they're on sale, like MONSTRESS and BLACK MAGICK, though I am several issues behind on reading all of those. For the past few weeks Marvel's been undermining their retail partners by putting recent books, with print prices as high as $75, on sale for $1, and I've been happy to take advantage of that. Although so far they've mostly added to the backlog of stuff to read. I have been making my way through the collections of 1950s horror anthologies they had on sale, which are often fun, if slightly clumsy.


Been trying to catch up on movies that I've missed over the last few years, as well as some older stuff I never got around to only have vague memories of.  Maybe longer comments on a few of them later, but for now:

I thought WONDER WOMAN (2017) was pretty entertaining, far more than most modern super-hero movies, although not without a few problems, mostly the related to the parts of its DNA shared with the other DC movies of late. Overall about 75% of the way to a good movie, which is pretty close.

I wasn't as impressed with SPIDER-MAN HOMECOMING (2017). While parts of it were better than most of the previous Spider-Man movies (I'd have to go back and see if the first two Raimi directed ones hold up, and if either has enough good stuff or I'm just mentally combining the two), overall I'm not sure that they got the point of Spider-Man, certainly not if their idea was to give him an Iron Man suit and computer guide.

I really enjoyed ETHEL & ERNEST (2016), based on the 1998 Raymond Briggs book that I discussed here. It captured most of what worked in the book, with a pleasing visual style and some very effective voice acting. I wasn't completely taken with some aspects of the animation style, so that while I might have like each frame in a sequence taken in isolation, it sometimes bothered me how things moved in the actual movie. But that's a minor complaint, overall I'd definitely recommend watching it after reading the book.

I guess that'll do for a start.  Some possible upcoming topics, comics including THE ETERNAUT, HERO SQUARED, PLANET HULK, ASTRO CITY, a few TV shows I've been watching including AMERICAN GODS, CURB YOUR ENTHUSIASM, BETTER CALL SAUL, THE HANDMAID'S TALE, THE GOOD PLACE, some more detailed thoughts on a few movies, a discussion about the state of digital comics and other stuff.
No comments: