The publication of Osamu Tezuka's PHOENIX finally continued after nothing in 2005, with at four volumes out this year, "Nostalgia", two volumes of "Civil War" (with "Robe of Feathers" included in the second) and "Strange Beings / Life". One more story, "Sun", of an unknown number of volumes, still to come. I really do need to get caught up on these, but I can say that "Nostalgia" was some strange-ass shit.

Or at least I thought so until I read Tezuka's ODE TO KIRIHITO, which brings Tezuka strange-ass shit to a whole new level. I'm still trying to figure that one, more thoughts on it soon, but parts of it were definitely brilliant, if disturbing.

Big year for Tezuka, as I think the last bits of BUDDHA came out early this year (or maybe late last year). Another one I haven't gotten around to catching up on yet.

Awful lot of Jack Kirby stuff came out, some of it long overdue. Some good Ditko as well.

The loss of Alex Toth this year was mitigated slightly by the publication of DEAR JOHN - THE ALEX TOTH DOODLE BOOK, a great collection of some of his letters and sketches and notes on stories.

Linda Medley's CASTLE WAITING returned with both a gorgeous collection of the earlier material and a new series picking up where she left off. Both are recommended.

USAGI YOJIMBO continued at its regular pace, with some good short stories, and is getting close to the symbolically major #100 issue of the current series.

Mark Martin returned with a new series, RUNAWAY COMIC, which was a welcome dose of high-energy insanity, which you can also sample on his blog (where the current storyline has Steve Bissette losing his head).

And more insanity with Bob Burden returning to GUMBY, and bringing Rick Geary along. Seems to have fallen behind schedule almost out the gate, so I've only read #1, but I hear #2 is out now and even stranger, so hopefully a lot more to come in 2007.

And is mentioned recently, it was good to see Ploog and DeMatteis return to ABADAZAD in a new format this year. Looking forward to seeing the story move to new ground in the future.

Lots of big comic strip reprints. Two volumes of COMPLETE PEANUTS, the second WALT & SKEEZIX, the first volume of POPEYE, a big cheap SUPERMAN: THE DAILIES book back when a movie with a similar character came out. Lots of classic reading in those.

And a lot of comic book reprints of note, as well. DC really bought into its SHOWCASE line of thick b&w reprints with about a dozen volumes and came out with a lot of stuff I never thought we'd see reprinted, like over 500 pages of early Haunted Tank stories, early Jimmy Olsen, Elongated Man. Marvel's similar ESSENTIAL line also continued with a few major releases but mostly concentrating on their slightly less interesting (to me) 1970s books. We also got some nice inexpensive Disney reprints of Don Rosa's "companion" stories to his LIFE OF SCROOGE series and Carl Barks stories that inspired the DUCKTALES cartoon (although the colouring wasn't great in the Barks books). And it was good to see some of Walt Kelly's earlier work from the OUR GANG comics reprinted, although I'm not sure I'll be back for a second taste. I'd rather see Kelly in his prime with some POGO books. And of course we got a lot of LITTLE LULU reprints by Stanley&Tripp, including one book in colour. And the new series of hardcover colour EC reprints began, so those will be tempting me for a while.

A few major original works by major creators caught my eye. Alison Bechdel's FUN HOME is getting a lot of year-end list attention, and I'll just say that they aren't wrong. Eddie Campbell's THE FATE OF THE ARTIST didn't entirely work for me, but the parts that did worked very well, and even not-quite-there-Campbell is worth reading. David Lloyd's KICKBACK was a good crime drama, a bit light maybe and with a few flaws, but with some great artwork. Scott McCloud makes his "... COMICS" series into a trilogy with MAKING COMICS, which I'm still trying to wrap my head around. The first time through I wasn't that impressed, while acknowledging that I really wasn't the target for a lot of it, but a few things stuck with me, and I think I need to go through it again more slowly.

Well, that's some of the interesting stuff that came out. As I said, I tend to be behind on these things, so I'm sure a lot of them I'll only find out about around 2010.
No comments:

But that wasn't enough. They wanted reassurance, they wanted guarantees. They wanted to know they wound not be forgotten, even after the season was over; to be certain that someone would answer their needs when nobody else cared to listen. When the clock struck nine, and the security guards ushered everyone out to the street, they still held Iggy aloft, pawing at his jolly red suit and barking out their wishes, like Yuletide terrorists caught up in the frenzy of a hijack. For that's what he was, Iggy knew - a hijacked Santa, at the mercy of the people with the lists. It seemed, now, that asking just wasn't enough. They had their Santa and they were going to keep him, much like the people in fairy tales capture leprechauns and hold them until they tell where their pot of gold is hidden. 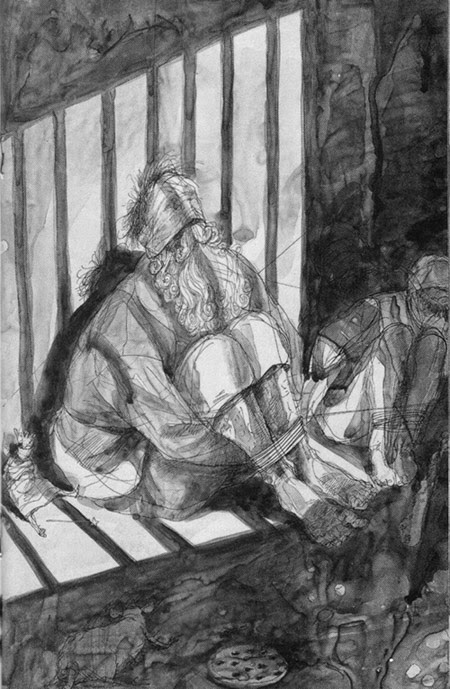 From "The Santas Of Demotion Street", Beautiful Stories For Ugly Children #16, 1990
Dave Louapre and Dan Sweetman
No comments:

A couple of years a failing comic book publisher put out three issues of a fantasy series by J.M. DeMatteis and Mike Ploog called ABADAZAD. Now a few years later it returns, with the same creators, now owned by Disney and published as a series of small hardcover books with a mix of prose, comics and illustration.

The series is about a 14-year-old girl named Kate who finds herself drawn into a fantasy world called Abadazad, which she knows as a series of early 20th century fantasy novels (in the vein of Oz and Wonderland) but now finds out were inspired by a real and much more complex world. In this world she hopes to find her long-missing and presumed dead younger brother Matt, who's been kidnapped by the villain of the realm, the Lanky Man.

In the original most of the story was straight comics, narrated by Kate, with a few pages of text taken from the supposed Abadazad novels. In this new version the narration is presented more explicitly as Kate's enchanted diary (a story element in the actual tale), where the illustrations (even of events she wasn't there for) appear by magic. Some parts of the story are still told as straight comics, and the samples of the "novels" still appear, though shorter than they were originally. 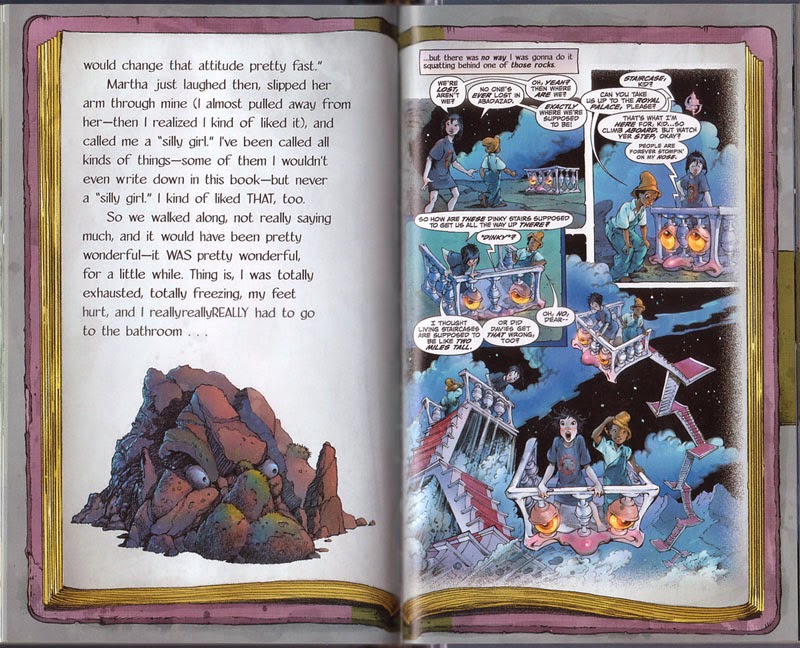 The first two books were published recently, THE ROAD TO INCONCEIVABLE and THE DREAM THIEF. The first one pretty much retells the first two issues of the comic book, and I guess the second (which I haven't read yet) continues with the third issue and beyond into previously untold segments of the story.

I enjoyed the first book, though maybe not quite as much as the original comics. That might just have been caused by reading the comics first, and maybe it'll work better when it gets to stories original to this format. There were just a few bits where I missed the Ploog artwork visually realizing the concepts on some of the longer prose passages. But as I said, that's mostly just comparing to the original, and for the most part the book is heavily illustrated enough for any fan of Ploog.

Anyway, I should have the second book soon, so more on the series when I do.
No comments: 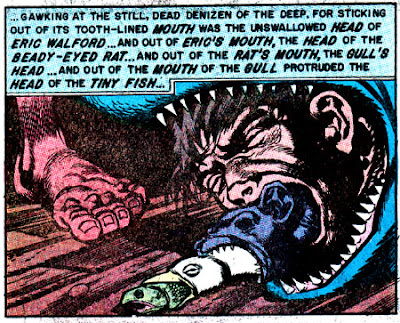 And a little boy saw that in 1955 and decades later came up with the idea for turducken.

Anyway, that peculiar image came about as the climax of a story about the lone survivor of a sunken ship who finds himself washed on the shore of a completely deserted island. Well, deserted except for the rat that also found its way to shore on the other end of the same plank. Thus begins a rivalry between the two as the man slowly starves, and the rat waits for him to die. One nice scene has both the man and the rat regurgitating some distasteful seaweed that washed ashore. Finally on the verge of collapse the man is able to knock down a gull that had just caught a fish, and I think you can see where this is going. The rat gets to the gull first, drags it out to sea, where the man follows and is attacked by a shark, which is caught by some native fishermen who get a surprise. That would make me lose my taste for fishing.

Bizarre little story, Davis' art has a lot of nice touches as the man gets increasingly desperate and crazy, and plays off the perspective nicely, making the rat look huge and a proper rival in some panels and small and distant in others.
No comments: