Classic comic book artist Al Williamson passed away a few days ago at age 79.  You can read a lot more about his life and work from people who met him like John Fleskes, Steve Bissette, Rick Veitch, Ty Templeton, Mark Evanier and many more.

I've posted previously about a few of Williamson's EC stories.
Fired!
Fish Story
The Thing In the 'Glades
Upheaval!

And about some of his Flash Gordon work here and here.

I think the first place I noticed Williamson's work was the adaptation of THE EMPIRE STRIKES BACK that he did with Archie Goodwin back in 1980.  Even with the less than ideal mass-market paperback format that I had the comic in it was some great stuff, perfectly suited to his style. 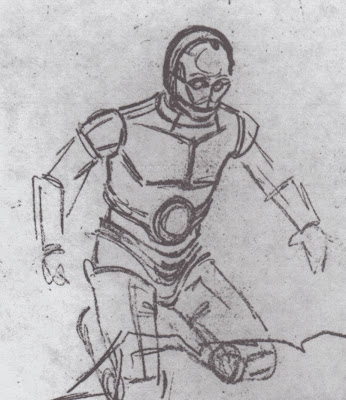 I think the next thing I saw was the "Cliff Hanger" backup he did in the back of SOMERSET HOLMES with Bruce Jones. A great classic adventure story in six parts. 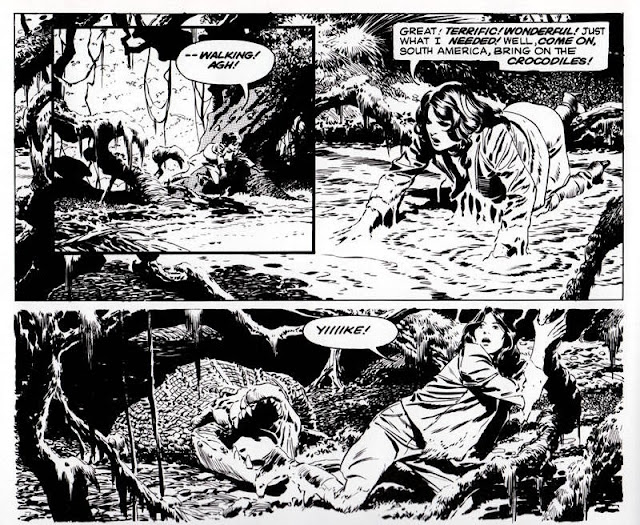 (from the reprint of "Cliff Hanger" in ISG's AL WILLIAMSON ADVENTURES [2003], an excellent collection of Williamson's later work with a variety of writers, with most of his full art jobs from the later years not in the movie adaptation or comic strip vein excellently reproduced in a large size)

I would later discover a lot of his other work, of course.  It's gratifying to see the Goodwin/Williamson "The Success Story" from CREEPY #1 singled out so often in writings about Williamson this past week.  That was the first story I read when I heard about Williamson's passing, as it was the first one I read when I heard about Archie Goodwin's passing in 1998.  A highlight from a pair of creators with careers full of highlights. 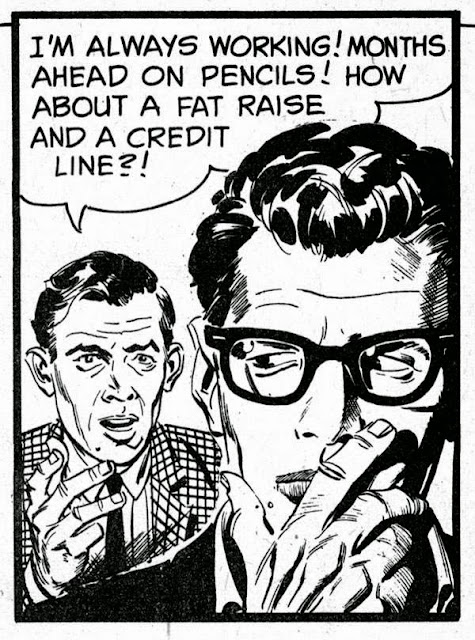 And while it was a minor part of his career, I really liked the brief time in the mid-1980s when he inked about a dozen Superman comics over Curt Swan. It was probably the best sustained run of quality inking that Swan had since Murphy Anderson in the early 1970s. 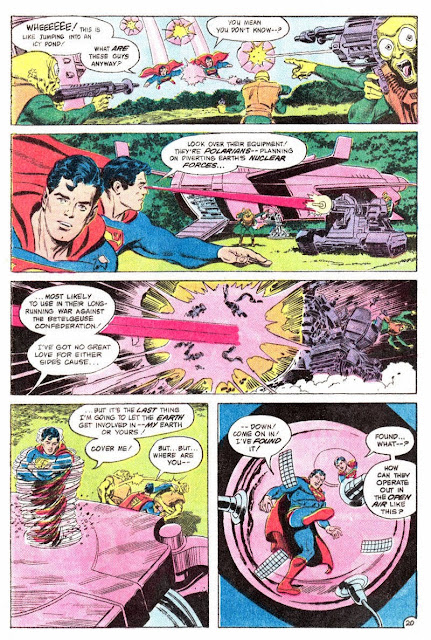 
Williamson spent much of the last two decades of his career inking other artists, and not surprisingly he generally made the work all the better for it.  There was some great looking work over Bret Blevins, Lee Weeks and Pat Olliffe, and of course a classic Superman/Swamp Thing crossover over Rick Veitch.  To close, Al Williamson inking Mark Schultz drawing a dinosaur and a giant penny. With some incidental Batman... 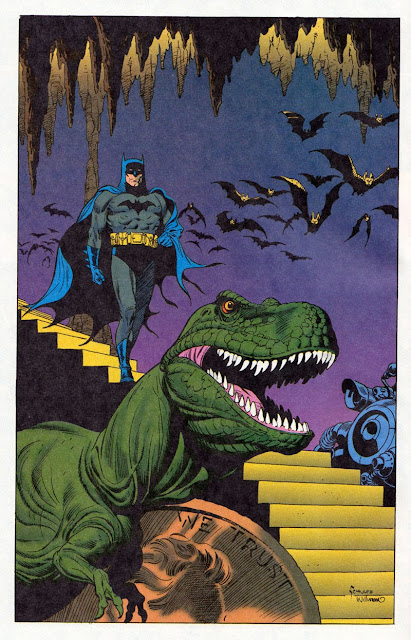 Williamson's family requests donations in his memory can be made to

Been reading some later Peanuts strips recently. I really enjoyed the March 14, 1999 strip, since it's a callback to one of my favourite classic sequences. First, from 1967...

And now the callback... 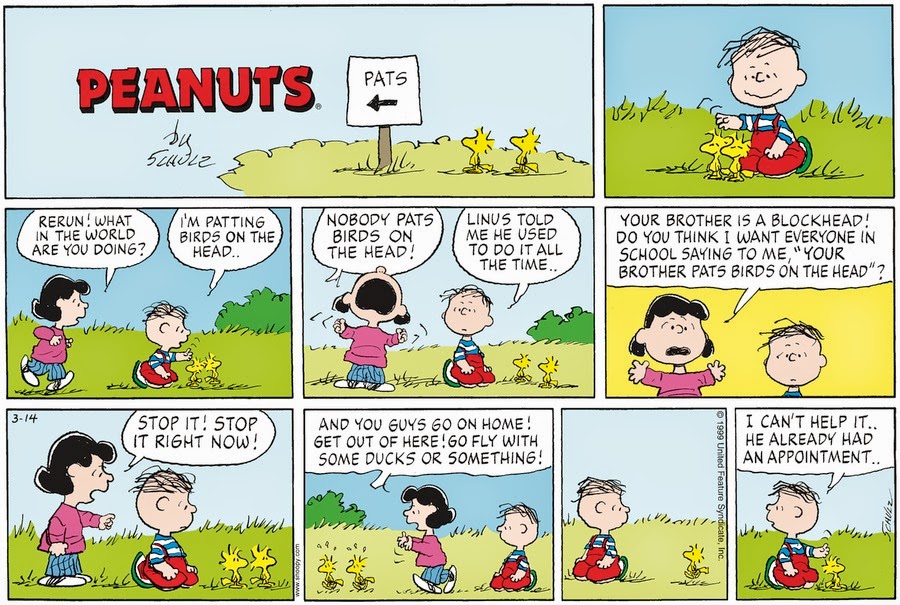 Both by Charles Schulz, of course.

Oh, and since I want to be able to find it quickly later, the Little Red Haired Girl:

THE ART OF DITKO

THE ART OF DITKO is a large 208-page hardcover published by IDW a few months ago.  The bulk of the book is a reprint of 27 ½ short genre stories that Ditko drew for Charlton comics in various stints with the company between 1954 and 1976.  All of the stories are reproduced in full colour with the printed comics as the source.  Most of the scripts are uncredited, except for one by Nick Cuti. Not mentioned in the book,  but Steve Skeates has previously verified that he wrote one of them, and recently Bhob Stewart has written that he and Russ Jones wrote one of the later ones.  Several of the others were probably written by Joe Gill.

In addition to the stories, there are 10 covers from Charlton reprinted.  The rest of Ditko's career is represented by the reproduction of a dozen pages of original artwork, which includes examples of the Marvel super-heroes, the short "Atlas" fantasy/sci-fi stories that preceded them, two pages from Ditko's brief period drawing for Warren's black and white magazines, a Mr. A page and a few others.  There are also a few short essays. Detailed list of the contents and sources over here.

Overall, I'd say this book is an inferior presentation of some superior material.  I didn't go into the book with the highest of expectations.  I already knew about one major issue, page 3 of this story being missing, replaced with page 3 of this story, which oddly isn't even otherwise included in the book (and why I said it has "27 ½" stories above).  Obviously production mistakes happen to the best of publishers, but that one is pretty sloppy.  I had some other issues going in as well based on what I heard about the book.  Even with those expectations lowered, I found the book to be disappointing.

But before we get to those, I will say that the strength of Ditko's art (and in a few cases the quality of the mostly uncredited writing) probably still makes the book just barely worth picking up, thanks to its relatively low cover price and the generous discount you'd probably buy it at. This book includes about 5% of Ditko's work that would qualify for inclusion (non-super-hero short story work for Charlton), and while it's not the top 5%, I'd say everything included is pretty solidly in the top 23%, and if you like Ditko, that's pretty good. I won't get into details about the individual stories, I have someplace else where I can and will write about that.  The only real quibble in story selection is that most of these stories have been reprinted before, some quite recently (and in the case of three of the 1970s stories, in a much superior form (black and white, apparently from original art or quality stats rather than printed comics as the source) in a still-available book co-published by Ditko).  Only 4 of the 27 stories have never been reprinted before, and two of those were among the weaker stories in the book (to be fair, the other two were among the best). Obviously if you're going to get a collection with the top 23%, you'll get a few that someone else decided to reprint before, but there are a lot of gems in the 200 or so still never-reprinted Charlton short stories, some 1200 pages, that Ditko drew.

Now, other than the missing story page, a big problem was a printing error which may not affect the entire print run (although I did double check with a copy not from the same source I got the one I read, so definitely not a unique error).  There's an annoying void in the artwork, about one-inch long, that occurs every 8 pages from page 64 to 160.  To wit: 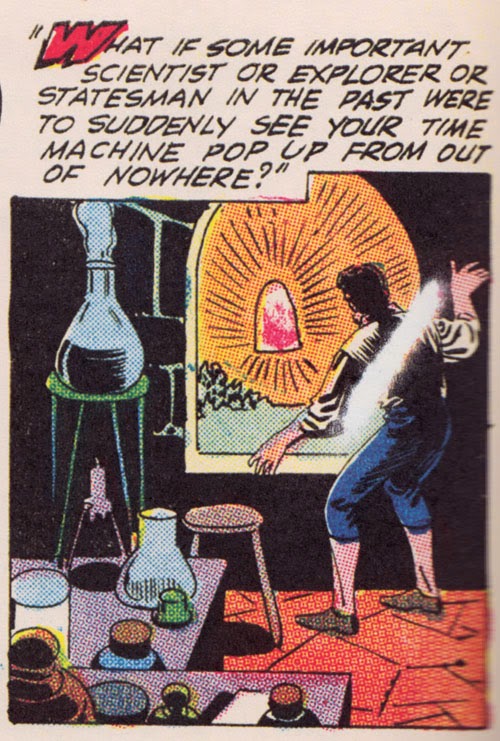 (if the top right panel of page 104 of your copy doesn't look like this, let me know)

When I saw the first one I thought it might have been a scanning thing (there is another scanning issue, a page where it looks like a small piece of paper fell on the scanner beneath the comic), but when I noticed more of them, and that it occurred every 8 pages like clockwork (the size of the signatures of the book), at exactly the same place, figured it must have been a printing issue. If it's just in a very few copies, I guess that's an understandable lapse in quality control. If it's in all of them, that's quite a problem to miss.


I also question the editorial choice to present the material in what appears to be a random order, as you can see from the aforementioned list. There really does seem to be no order in either that stories or in the original art and covers used between stories.  I'm not sure why that's considered a good thing.  I don't mind reading stories out of order, but I can do that myself, and wouldn't mind having the option to easily read them in some order, maybe at least separating material by decade or something.  Strict chronological order would put slightly below-average stories both first and last, but I don't see how that's really an issue.

On the actual reproduction quality, a few months ago I said about another Ditko reprint, "there's a limit to how good a reprint can be if the source material has to be actual printed comics from the 1950s, though what's possible overall has improved tremendously in the last decade.  Late in the last century a reprint of this quality probably would have been considered state of the art.  In 2010, I'd say it's solidly average, maybe give it a 6 or 7 out of 10".  For the most part I'd say the same for this book. It gets a few points more for the larger page size, loses a few for some production issues (other than those mentioned above).  I liked the paper a bit more, liked the binding a bit less.

Which leaves the text essays.  The first is by Stan Lee.  I'm really not sure why (other than a few of the original art pages he wasn't involved in the contents), but it's typical Lee, whatever that may mean to you, with a few of those Lee-isms that I'm sure some people find charming.  The book's editor Craig Yoe writes a few pieces, partly about his own interactions with Ditko (including an entertaining story about introducing him to Jim Henson) and about some of the stories reprinted.  Most interesting was a short piece by Jerry Robinson, who taught Ditko in the early 1950s.  Not really anything in here that he hasn't talked about in interviews before, but always good to hear from Robinson. John Romita provides some thoughts on following Ditko on Spider-Man, and P. Craig Russell writes a few things on his long time as a fan and brief time as an inker of Ditko. As they say, mostly harmless, although like the rest of the book the text pages could have benefited from another one or two editorial/proofing passes.

So, as I said, worth getting as a relatively inexpensive and easy to obtain sampler of some of the better works of a substantial body of work spanning over 20 years, but disappointing overall for a variety of reasons.  An inferior presentation of superior material.  Overall I'd give it a 6/10.
3 comments: