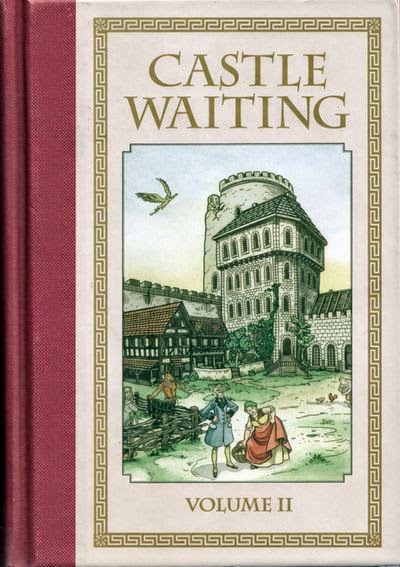 Well, this is kind of an odd thing. On the merits of the work, the newly released CASTLE WAITING VOLUME 2 deserves as high a recommendation as I'm likely to give. I've been a fan of Linda Medley's series since I first encountered it in a short preview in Charles Vess's BALLADS AND SAGAS back in 1997, which insured I picked up the first issue of CASTLE WAITING when I saw it a few weeks later (and went back to pick up the CURSE OF BRAMBLY HEDGE one-shot I'd missed from the previous year). I was thrilled in 2006 when the series returned with a gorgeous hardcover reprinting the completed storylines and a new on-going series reprinting and then continuing the story begun back in 2002. That new series was on of the few serialized comics I continued to buy in the last few years, and came out fairly steadily until early last year, with 15 issues in all. This new book collects all 15 issues of that series, which is quite a bargain at $30, less than half the cover price of those issues.

Unfortunately, right now I can't recommend it, since as you can see it sort of lacks a certain something, that being Linda Medley's name on the cover. In fact, her name only appears in the copyright notice and a sticker on the backcover. The only information I can find on that on-line is here, where the omission is just noted as being at Medley's request. I probably wouldn't have bought it if I had heard about that first, unless Medley said publicly that she was okay with it. Unfortunately, her own website vanished quite a while ago. 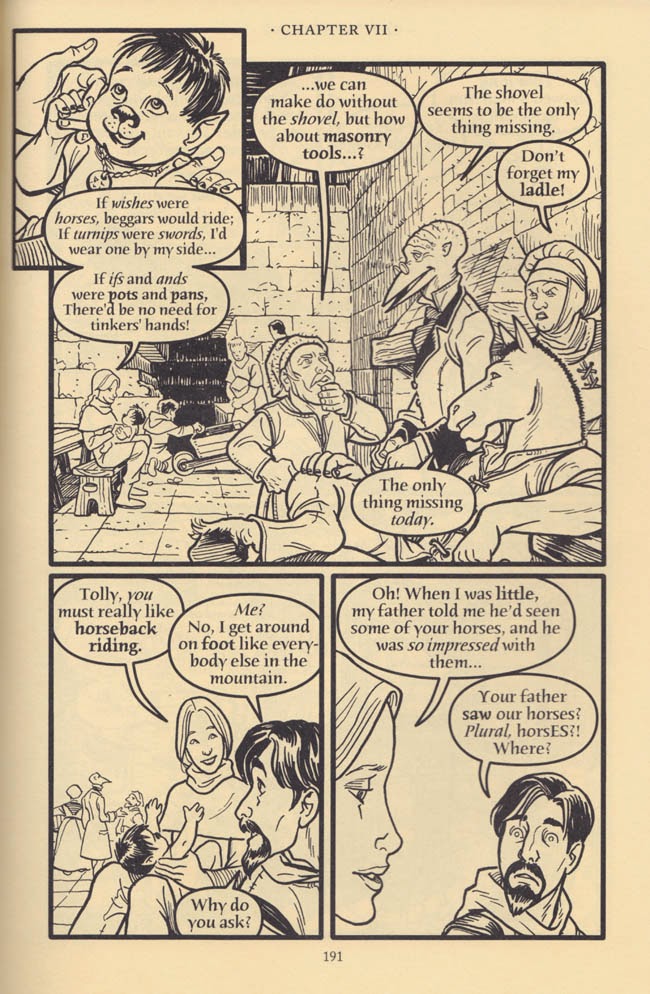 The other thing the book lacks is an ending, as the 15 published issues don't complete the story begun in #1. I'd say that it was at least two, maybe more, issues from a conclusion. Hopefully in the near future we'll get some news on when and where Medley will continue the story (presumably not from the same publisher), but I can't really recommend the book if there's the possibility that it'll be re-released in a proper edition with the full story. I mean, I've already bought it all twice (three times in the case of the first two chapters), and I'd probably buy it a fourth if need be, but that's just me.

But as I said, on the merits of the work, this is a great book, as good as comics get.  Medley continues her exploration of the denizens of Castle Waiting, characters from fairy tales and folklore living their lives after the famous adventures are over. Medley continues with her rather unique structure, where she has a leisurely pace for the main story but a very dense narrative overall as she explores the pasts of the characters.  And of course her art is beautiful, full of great character designs, body language, facial expressions and some of the best renderings of architecture in comics since Gerhard at his peak.

Anyway, a great book despite the misgivings above.  Hopefully we'll get some news about the future of the series and I can clarify if I actually recommend the book or not.  Until then, see if your local library gets this, and the first book.

(2012 update, see here for news on the long-delayed continuation of the story, which will eventually lead to an updated VOLUME 2 book)
8 comments:

A few quick comments on some stuff I've read or bought or plan to read or buy recently. Look for longer posts on these books and other things in the future.  Or, you know, maybe look for another long gap before I post again.  You never know. 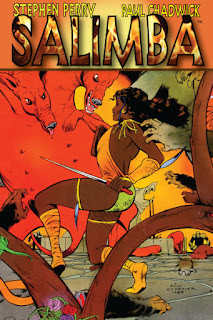 As Steve Bissette mentions here, the new edition of Steve Perry and Paul Chadwick's SALIMBA is now available.  I should have my copy soon, and I'm looking forward to it.  I never did find my original copies of the Blackthorne 3-D version, and in fact in looking for it found that there are a number of 1980s 3-D comics I once owned that I can't find.  I guess they were stored together at some point and misplaced.  Most of them are no great loss, especially since I can't easily read 3-D comics anyway, but Salimba was one I remembered enjoying despite the 3-D, so it'll be good to have a more readable edition of that.  This version also includes a new prose short story by Perry, illustrated by Bissette.  More when I get my copy.

I  also recently read Paul Chadwick's more famous series, CONCRETE, in the seven-volume reprint series that Dark Horse put out a few years ago.  I'd read about half the material in those before, but had drifted out after a while and never got back in.  Very mixed reaction.  Some of it was brilliant, of course, but sometimes Chadwick seemed more interested in playing with some design or with some cause and it didn't work at all.  It does end on a fairly strong note, though, and it's good to hear that after several years away Chadwick will be returning to Concrete soon.

Caught up on the last few issues of USAGI YOJIMBO recently, and Stan Sakai's going through a good period.  Not that he's been through very many weak ones over the last two decades.  The big 1200 page collection of early the Fantagraphics years of the series should be out in the next month, and I'm sorely tempted to get that one, even though I finally did find the last of the original issues I needed a while back.

In a slightly related somewhat less expensive big book, I got a copy of the recent MAD'S GREATEST ARTISTS - SERGIO ARAGONES hardcover, a nice survey of Aragones' work for the magazine from 1963 today.  A nice companion piece to my beat-up coverless copy of the 1978 MAD'S SERGIO ARAGONES ON PARADE.

Michael Zulli has a new book coming out early next year, THE FRACTURE OF THE UNIVERSAL BOY.  Keep an eye on his site over here for some information about it.  I'm still not clear on what the book is about, but his publisher had some spectacular art from the book over here a while back, and 200 pages of artwork of that quality isn't something you see every day.

Mark Crilley's BRODY'S GHOST #1, the first of a six book series to be published by Dark Horse, is a nice start to a light fantasy series. There's a strong influence, acknowledged in the sketch pages in the back, from Takeshi Obata's work on DEATH NOTE, which is a good influence to have.

Speaking of DEATH NOTE, I just noticed that Viz is releasing the series, this time doubling up on the volumes, and it looks like a slightly larger size.  I'm glad I put off on buying the box-set of the original volumes (after reading the series in borrowed copies), since these look much more to my liking.  Classier covers, too.

For something completely different, I got Jimmy Gownley's AMELIA RULES - TRUE THINGS (ADULTS DON'T WANT KIDS TO KNOW) recently, his latest original book in the adventures of Amelia McBride.  Very enjoyable, as always.

Read Eric Shanower and Skottie Young's adaptation of THE WONDERFUL WIZARD OF OZ. It took me a while to get used to Young's design, as I really wanted the book to look like Shanower's old original OZ comics from 20 years ago, but I came to appreciate the merits of Young's approach after a while, and it was a nice version of the original novel, which I haven't read in ages. I'm glad to see the series is continuing (in the middle of the third novel now) and look forward to reading more someday.

Read the first two volume of Mike Carey and Peter Gross's THE UNWRITTEN.  So far I liked it, some parts are really clever, though I'm not sure about some aspects and don't know how long it can maintain my interest (I was reading Carey and [mostly] Gross's run on LUCIFER a while back, and after some really good stuff lost all interest just past the half-way point).

I'd read a few bits of it before, but over the two months I got around to reading the complete run of THE WALKING DEAD, up to volume 12 (72 issues).  Very mixed feelings on it, which I might get to later.  It reads very smoothly, almost too smoothly, as it one of the shallowest comics I can ever recall reading, both in script and art.  What's there isn't bad, but it's all on the surface, to the point that the few times it isn't all on the surface I tend to miss it.  I also really prefer Tony Moore's art on the first book to Charles Adlard on the subsequent books (though Adlard has his moments, especially in the more recent issues).

I've also been watching the TV show based on the comic.  Not hugely impressed, although there is some enjoyable stuff in there.  Enough that I'm willing to watch the rest of the short 6-episode season.  If it were a full season I'd be seriously thinking of quitting it now.

Some other new stuff sitting around waiting to read.  Joe Kubert's latest war comic DONG XOAI, VIETNAM 1965 looks really good.  Got the new edition of Mark Schultz's XENOZOIC from Flesk, completely re-shot from the original art whenever available, and looking better than ever.  Also from Flesk, AL WILLIAMSON ARCHIVES v1 has some great sketchwork stuff from the classic artist, including an unfinished Xenozoic story, but I would have liked some more notes on the material to give it some context.  Still, gorgeous book.  Just started the recent SHOWCASE PRESENTS DIAL H FOR HERO reprint of the 1960s Jim Mooney illustrated series, stuff I'd long heard of but never read, and it's nicely wacky, in a way I'd have loved when I was 10.
No comments: 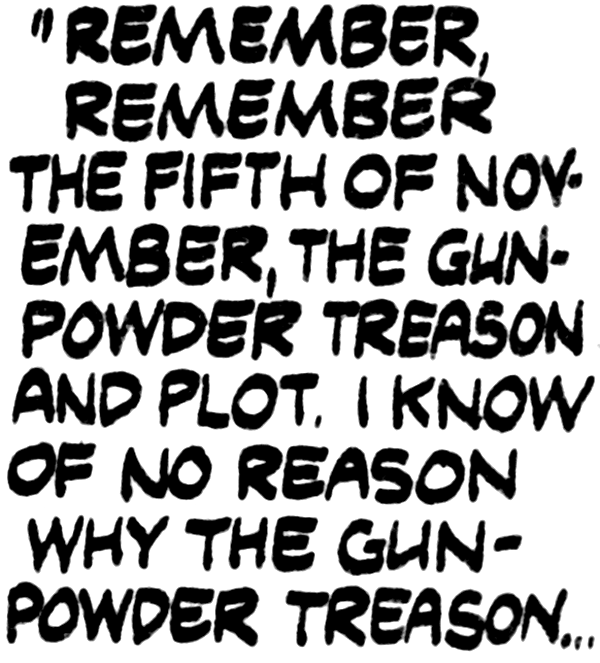 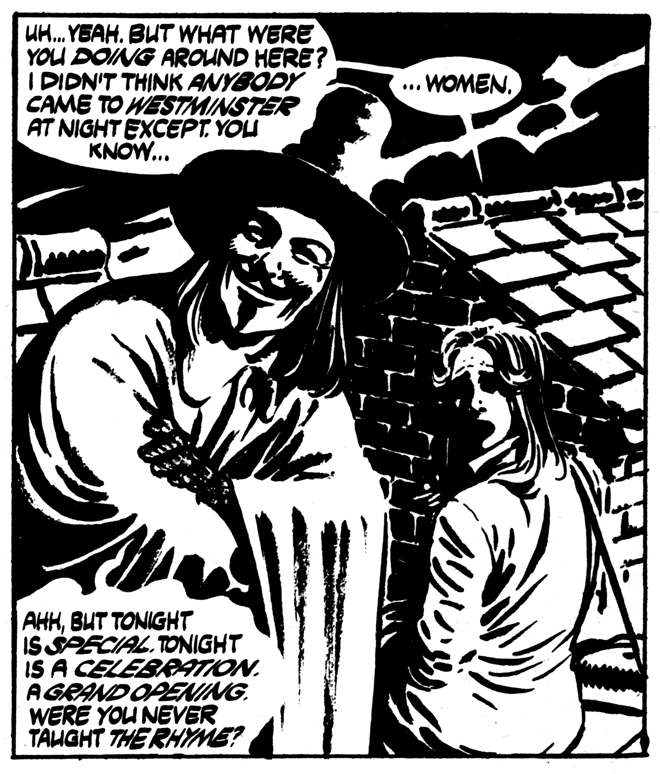 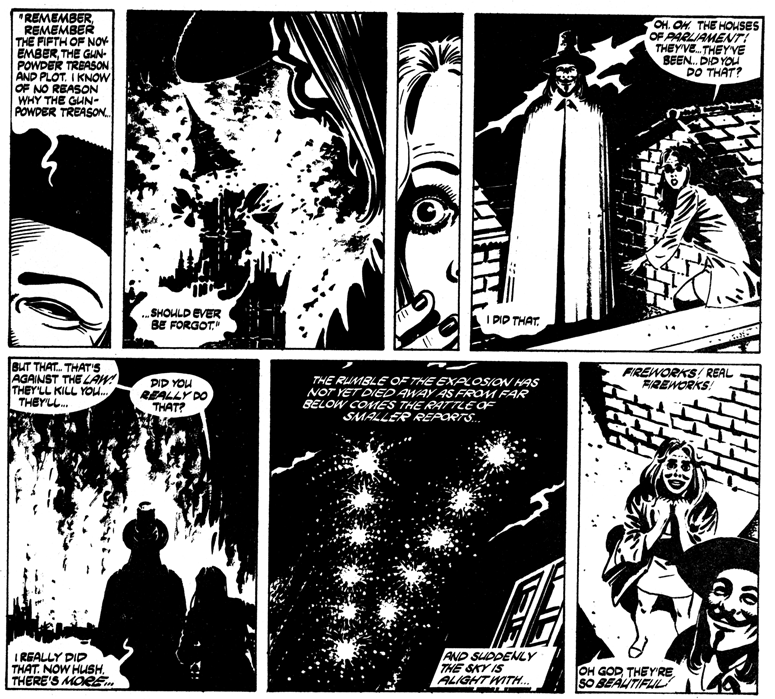 Seriously, I can't be the only one who would pay good money to see a proper black and white edition of V FOR VENDETTA. Someone get the rights to revert so that Lloyd and Moore can get a proper publisher for it.

And remember, kids, don't try this at home...
No comments: