My Collection - SOULSEARCHERS AND COMPANY [1993 Series] 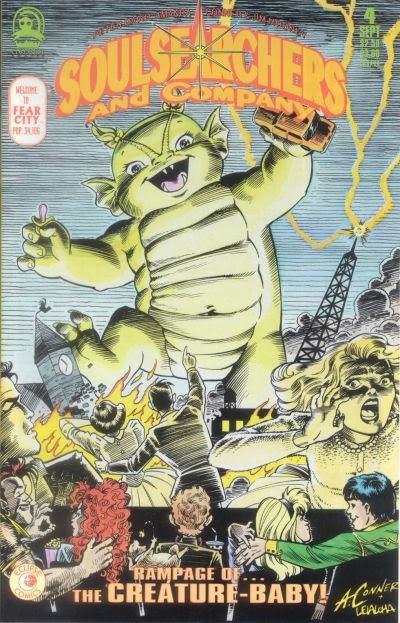 This is a long-running, still on-going action/humour book published by Claypool, written by Peter David and Richard Howell, originally drawn by Amanda Conner (who still draws the covers) and then by a variety of artists, including Dave Cockrum for a long run, Neil Vokes, Marie Severin, Dan Spiegle and others, with Jim Mooney doing most of the inking through the first few years. Apparently it began life as a pitch by David and Howell for a team-book using pre-existing characters for another publisher, transformed to this when it didn't fly there. There were some guesses about exactly what characters in the letter column, but I don't think they ever confirmed it. Most people seem sure it was Marvel and involved some combination of Damon Hellstrom, Hellcat, the Scarlet Witch and/or a few other affiliated characters. But maybe none of those. Anyway, it's about a group of low-rent investigators of mystic happenings, including a young apprentice witch, a shape-shifter, a demon and others. Lots of laughs in every issue, including a lot of puns and pop-culture references (to movies, TV shows, other comics and the comic industry in general), as well as general character based humour. I doubt anyone will get every reference, I know I didn't, but there's enough that you would get to make it worthwhile. 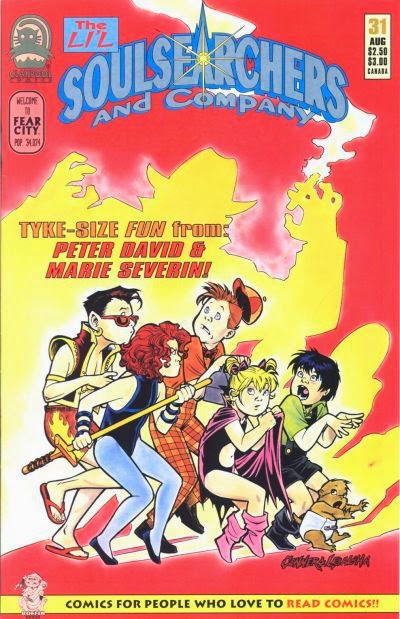 I heard some good things about the book shortly after it started, and picked up an early issue (I think it was #4), and liked it well enough to start getting the book and eventually pick up the earlier issues.

It continued to be generally enjoyable, although with a few weak issues every now and then, but after a while I mostly stopped having comics pulled for me at the comic shop, and eventually I had more trouble finding it, and didn't really think each new issue was really adding a lot to the overall story, so I stopped getting it. Picked up a few issues here and there, and may pick up some more of those I'm missing eventually.

Recently news came down the wire that the book and its companion series DEADBEATS might be ending early next year if sales don't pick up. So I might check it out again.

A few favourites from what I have-

#3 was the best of the early ones, especially for those familiar with modern comics, as it features thinly veiled versions of Dream from SANDMAN and his Marvel counterpart Sleepwalker facing off.

#24 is a good example of Dave Cockrum's work on the title, and includes the explanation about why the group's founder is a talking prairie dog.

#31 is one of my favourite guest artist bits, with Marie Severin on the pencils, and a lot of goofy fun in the story.