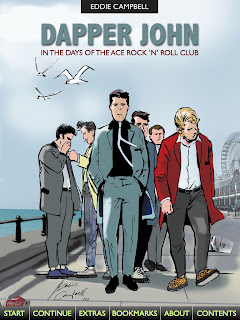 DAPPER JOHN is the new edition of an early Eddie Campbell work drawn in the late 1970s, published in various small-press venues in the 1980s and previously collected as IN THE DAYS OF THE ACE ROCK 'N' ROLL CLUB by Fantagraphics in 1993. It tells a few tales about the "teddy boys" of Southend in the mid-to-late 1970s, young men who mythologized the 1950s and their own lives in equal measure ("mythologising their walk down the street before they'd come to the end of it" as Campbell puts it). This new edition is a digital-only book, containing the main body of the work (eight 7-page stories) and a wealth of extras bringing it up to 152 pages in all.  It's the first such publication from Panel Nine and currently available only as a standalone app for the Ipad. And seeing as how I now have an Ipad, it became the first non-free comic I purchased and read on the device.

The stories are pretty much a trial run for Campbell's later and better known ALEC stories (currently available digitally as ALEC: THE YEARS HAVE PANTS for $10 from Top Shelf, and which might have been my second purchase on the Ipad if I didn't already have the print version). A bit rougher around the edges in both the art and dialogue, though getting polished in both respects very quickly in just the year between Chapter 1 (March 1978) and Chapter 8 (February 1979), but you can see the sensibility that would later be employed to great effect in the next few decades of Campbell's work.

It's well worth picking up if you don't have the previous print collection, both as an interesting glimpse into the emergence of what we now know is a major talent, and frequently as an entertaining read on its own merits. 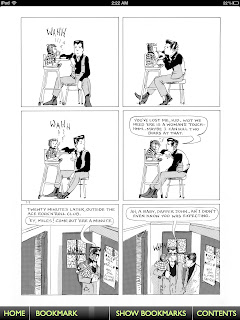 Now, for the format, I found the interface very intuitive and the art perfectly readable in the full-page mode. As a comparison when I got to one of the middle chapters, I pulled out the old Fantagraphics collection and read it in that version instead, and while I have an undeniable affinity to the paper delivery system I've been using for decades, there was much less of a difference than I was expecting. For me, paper is still superior, but I can see how for people for whom it's not as firmly entrenched the reading experience can be almost equal, and the other advantages of digital could tip the scale.

In addition to the full-page mode, there's also a "panel-mode" which zooms in to individual parts of the screen and pans across the page for each panel change and fades in and out of black for the page transitions. I tried to read a few parts of the book that way, but it really didn't work for me, especially when the zoom level changes so the size of the lettering suddenly shifts with no good reason. My print training kept me wondering why the characters were suddenly yelling or whispering for no good reason. And that's with Campbell keeping to a fairly regular grid for the most part, I'd imagine it's much worse with artists who use more eclectic layouts. 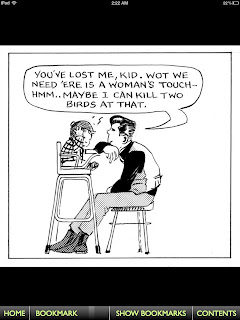 On the other hand, I did enjoy using the panel-mode to occasionally zoom in on a panel to see the work in greater detail, and then going back to the full-page mode to continue reading.  The art is pretty high resolution (maybe too high, you can sometimes see pencil and layout details that don't appear in previous printings, and I assume weren't meant to appear in the finished work, though I assume it was an intentional choice in this book), so there's a lot to be gained by occasionally looking closer at an interesting panel. Fortunately, the full-page mode does read fine on a high-resolution screen, so the panel-mode is good as an optional supplement, and I'd assume on a lower-resolution screen might be more essential to appreciating the artwork or reading the lettering.

One of the big advantages of digital is the ability to include supplementary material at minimal extra cost, which this book does to an almost absurd degree, which makes this a worthwhile purchase even if you already have the print edition.  As noted, the extras section more than doubles the size of the book. 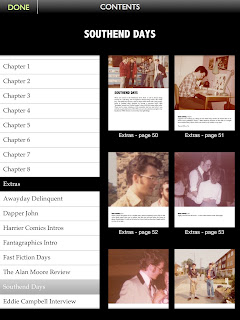 Among the extras, you get a ninth story done under the "In The Days Of The Ace..." banner before he realized he'd finished with the previous story, a brief 1980s attempt to revive Dapper John as the lead of a weekly comic strip, various introductions and covers to places where the stories appeared before (one of which, "The Author Contemplates The State Of Comics", is among my favourite Campbell short stories ever), an early review by Alan Moore on one of the small-press appearances, various photos and newspaper clippings of the era and a long new interview between Campbell and his editor about the stories, with a fair bit of new artwork. It makes for a nice hefty package which probably couldn't reasonably be duplicated in a print edition, for financial if not technical reasons (Panel Nine's second comic book, a new edition of David Lloyd's KICKBACK, goes further into the not possible with print realm with audio commentary by the creator. I'd probably buy that if I didn't already have the print edition). A few essential bits in there and a lot of stuff which adds to the flavour and background.

So, overall I'd say a promising start to a publishing imprint, and a worthwhile book to bring back into wide availability (especially if/when they release it for devices other than the Ipad).