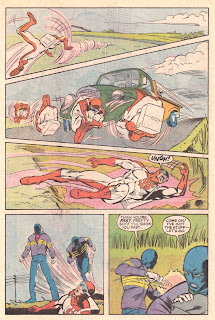 This is a year into Mike Baron's run as writer of FLASH, reviving the book with Wally West in the lead two years after the Barry Allen run finished. Baron would wind up soon, with #14. Jackson Guice was the initial artist, but he finished up the previous issue, and Mike Collins handles the pencils for the end of Baron's run. Inker Larry Mahlstedt was there from the beginning and would stick around for a few years while the rest of the creative team changed.

While I like this run of FLASH overall, I can't say I much like this issue in isolation. That's kind of a regular thing with Mike Baron books for me. I remember I picked up a few scattered NEXUS issues for Steve Rude's art, but couldn't get into the writing until I sat down with four or five consecutive issues, and it took me a few tries to appreciate BADGER. In this story, "Velocity 9", we have several different speedsters, like the Russian team Red Trinity from earlier in the run, now operating as the Kapitalist Kouriers, and other mysterious ski-masked speedsters, working for a shadowy boss revealed at the end of the story. That makes up for the running quota in the book, which is definitely not fulfilled by Wally West, who only appears in costume in one panel in the book (and that was gratuitous, probably only tossed in so there would be Flash appearance in the story. He's not even on the cover), spending most of it dealing with a conflict between his mother and his girlfriend. It works in context of the whole run, but really not as a single issue. The artwork is pretty solid, but has a lot of bland things to illustrate.

In the middle of the book is a "Bonus Book", a shortlived DC experiment from the era, where every month had a free 16-page insert done by new creators. This is the second one, and featured Doctor Light, then a relatively light-hearted villain, escaping from a prison transport and ending up in a small town, where he suffers his most humiliating defeat yet, at the hands of the children of Little Boy Blue and the Blue Boys (minor characters from the 1940s who ran as back-ups to Wonder Woman in SENSATION COMICS). The story is written by George Broderick Jr., penciled by Gordon Purcell and inked by Tim Dzon. It's not too bad, a nice diversion.