Technically speaking, this three-part story falls before the 1989 Annual crossover with Green Arrow covered earlier, as this is where Myra leaves the hospital, and she's already out and running the city by the Annuals. However, as I recall, the publishing schedule for the book really slipped around this time, so I tend to think of them in this order.

#28 - "A Place for the Arts" brings Shiva back to Hub City, in her never-ending quest for some sort of challenging combat. She's a great character in these stories, and of course has become a somewhat more major supporting character in the Batman family of books based on it, but as far as I've read never written quite as good as in these stories. In this story, Myra tries to bring some order to the city by bringing in the leaders of two rival gangs and making them the de facto police for the city. Bad idea, of course, but I really like O'Neil's writing of the two gang leaders. 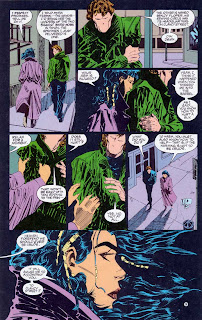 #29 - "The Slaying" opens up with the big showdown between Vic and Shiva, which ends up being a bit anti-climactic, as Vic is way out of his league. Fortunately she's still willing to help him out in his part of Myra's plan, as long as it provides her with opportunities to practice her art.

#30 - "Whodunit" concludes the story-line with a few surprises, as we get to see Myra showing a bit of the wits that'll make her a good mayor, and Vic satisfying some of his curiosity, which is always a good thing.

Interestingly, the "Next Month" box in #29 promises a story with Randy Violent filming a story in Hub City, a story that wouldn't end up actually being told until a few years later in the QUESTION QUARTERLY title.

Next time, finishing off the regular run of the book, including the long-awaited return of Richard.