Quick thoughts on a few things I've read or (mostly) re-read lately. I'm on a bit of a paper acquisition moratorium lately, with a few key exceptions I want to avoid getting any new print comics until I've made a good dent in reading or re-reading everything I own, and hopefully finding a way to productively discard some of it. I am still getting stuff from the library and digitally, though. I won't write about all of them, of course (especially not the stuff I decide to dispose of), but here are a few from the last couple of weeks. 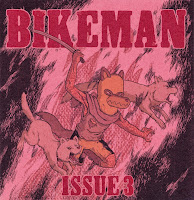 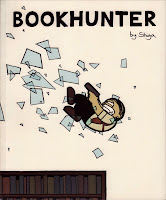 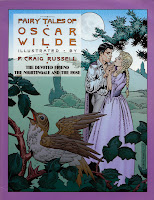 WIMBLEDON GREEN [2005]
This has long been my favourite work by Seth, which I know is something that might horrify him. I mean, I read the total published (still unfinished) "Clyde Fans" serial that he's been working on for over 15 years recently, and I thought it was okay, but I didn't like any of it as much as any given chapter of WIMBLEDON GREEN, a book he tossed off as a throwaway in his sketchbook during a few months in the middle of that 15 years. Anyway, I somehow missed the fact that he did a sequel of sorts in 2011, THE GREAT NORTHERN BROTHERHOOD OF CANADIAN CARTOONISTS, so I have a copy of that here ready to read, but decided to re-read WIMBLEDON GREEN first. If anything I like it even more than I did before. Seth creates an odd but fully realized world where golden age comic collectors are eccentric rich adventurers in pursuit of rarities, and even creates some great throwaway concepts for the comics they collect. Seriously, I would read a full comic of Seth doing the hoboing misadventures of Fine & Dandy much more quickly than another chapter of  "Clyde Fans". There's a lot of unfettered imagination mixed in with some genuine heart in these stories. Looking forward to reading GNBCC to see if that carries over.

BUZZ & BELL, SPACE CADETS #1 [1991]
This is a collection of pantomime strips by Sergio Aragonés, which from the biography in the back were published all around the world before getting an American edition. This collects 44 single page comedy adventures of the hapless human and monkey astronaut duo of the title. If you're familiar with Aragonés work from MAD, you have a good idea of what to expect, as he manages to get in every kind of sight gag fitting the theme across clearly. It was published at the same time as SMOKEHOUSE FIVE, another pantomime book of single page stories, that one with a fireman theme. I'm not sure if the single books published in America for each represent all of the work Aragonés did on the characters, some searching around indicates some foreign publishers had two volumes of each, but I can't find page counts so they might have just have been thinner books. If there are more I wouldn't mind a nice thick book of every strip of both features, and any other little-seen Aragonés work there might be. 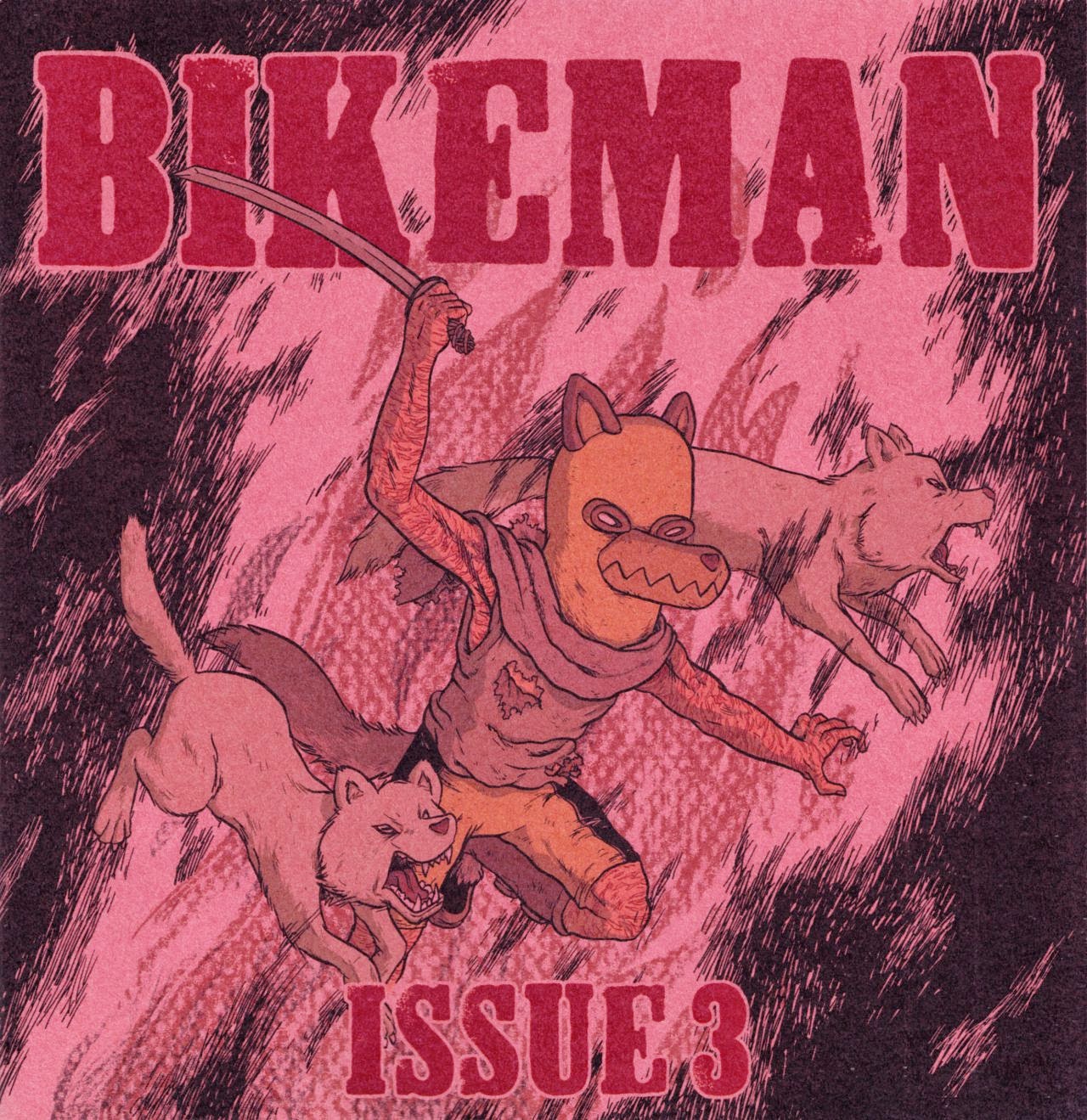 BIKEMAN #1 - #5 [2011-2013]
I really liked Jon Chad's first LEO GEO book (and should have the second one soon), so when I saw him at TCAF last year I picked up a set of his "minicomic" BIKEMAN. Well, "minicomic" is what he calls it, but they're actually pretty large and pretty long, with about 50 pages of story each. It's a fascinating elaborate fantasy world with intelligent bikes, a bear-masked Bikeman who shepherds them, a long-standing war between intelligent bears and wolves and the villager named Pedl who gets involved in that world. It's a weird and fast paced story that gets increasingly more complicated, and if there's a new issue out soon I'd make an exception to my paper moratorium to get it.

LITTLE NOTHINGS #1 [2007]
This is the first of four published English language translations of Lewis Trondheim's diary strip "Les Petits Riens", which is apparently still going on and up to six published collections in the original French. This is my favourite series by the very prolific M. Trondheim. Each page is a complete unit, and could be anything from his life, from travel stories to family life to work tales, and sometimes even, as the title notes, absolutely nothing. Everything is filtered through Trondheim's slightly quirky perspective, and drawn beautifully in his clean but detailed funny animal style and with a lush watercolour finish. After I re-read the four published books I think I might brush up on my French to read the on-line version.

SMITH BROWN JONES - CALM, COOL & COLLECTED [1997]
I really enjoyed Jon "Bean" Hastings' second series of SMITH BROWN JONES from 1998-1999, but never could find the last issue of that, or the self-published 1996-1997 series. It was a nice goofy book about an alien accountant working undercover on Earth, along with his floating robot companion and other friends, dealing with other aliens and everyday life. Recently I finally tracked down both the missing issue of series two and this collection of series one, so I read this one first (and it's the only book in this group I'm reading for the first time). It was pretty good, but not as good as I remembered the second series being. I'll see how that holds up soon, but my memory is that Hastings got a lot more polished in his scripting, the story moved along much faster once the set-up was out of the way and the artwork was much more accomplished. I don't want to sound too down on it, there's a lot to like in this book, but after all this time I guess I was hoping for more. Maybe combined with the second series I'll like it better. 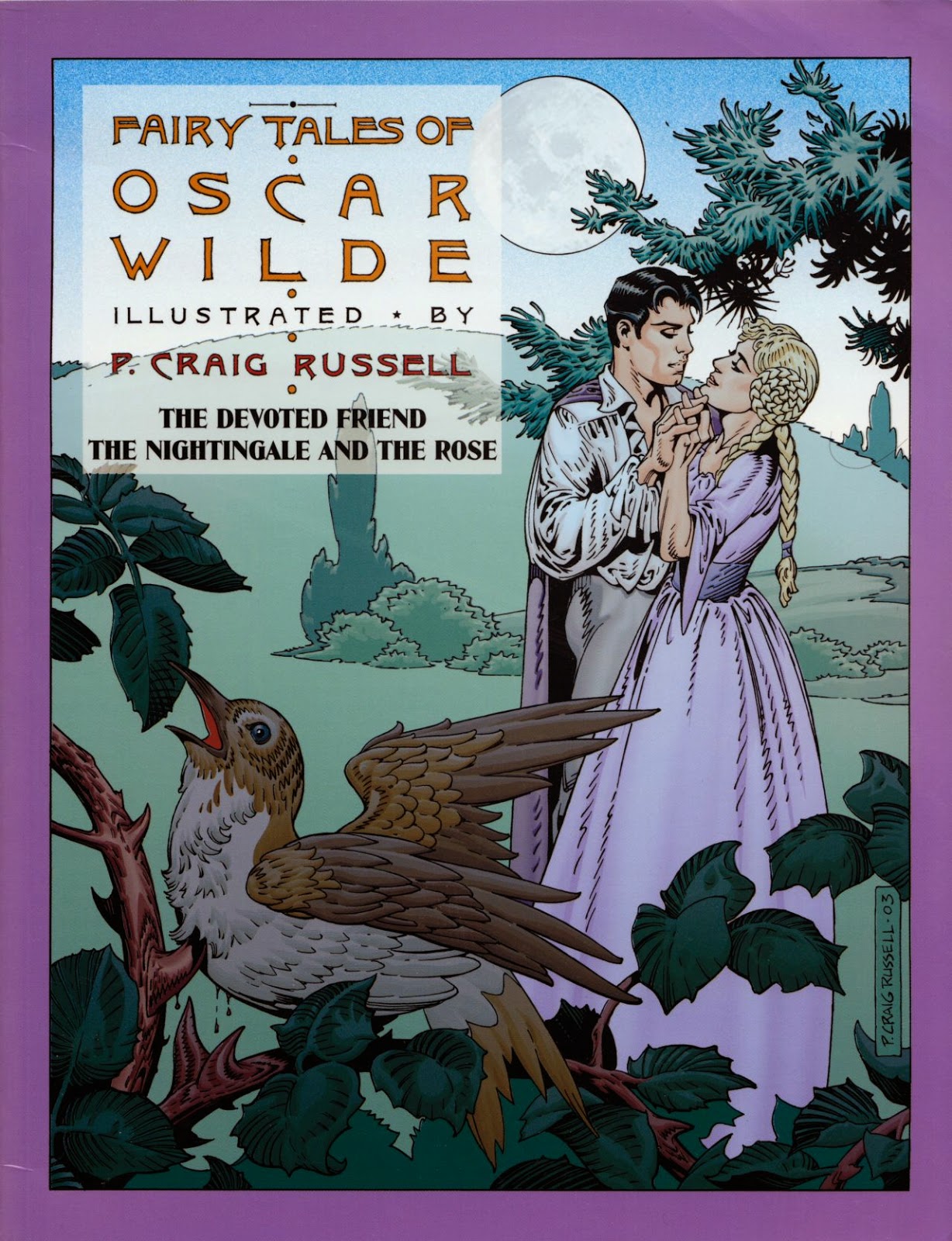 FAIRY TALES OF OSCAR WILDE #4 [2004]
P. Craig Russell adapted eight of Oscar Wilde's nine prose fairy tales to comics in five volumes published between 1992 and 2012. This is the only one I have, adapting "The Devoted Friend" (OP. 49) and "The Nightingale And The Rose" (OP. 54), though I've read a few of the others. I keep telling myself I'll get a single omnibus volume of all of them when he's finished, even if at the rate he's going that might not be for another decade. I see they are available digitally now, so that might suit me until a single volume paper edition is done. It's pretty much what you'd expect from Russell, a faithful adaptation of Wilde's short stories told with Russell's clean and expressive style. I especially liked "The Devoted Friend" of these two, with some nicely humourous bits with the animals telling the story. 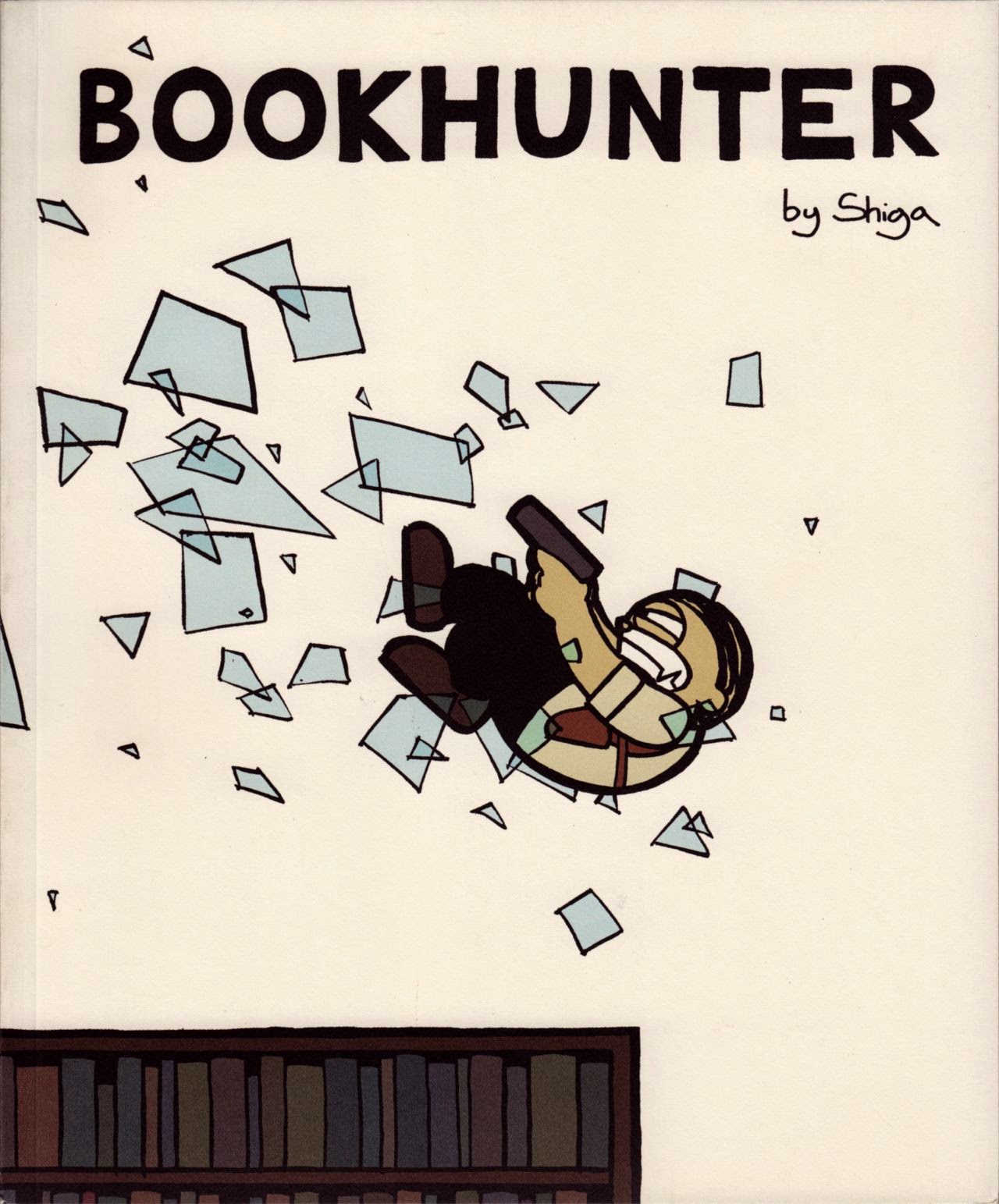 BOOKHUNTER [2007]
I've been reading Jason Shiga's new webcomic DEMON, and that gave me the push to re-read my first and still favourite exposure to his work, BOOKHUNTER (though DEMON is off to a good start). What I wrote years ago still stands, only to add that it gets better every time I read it. There are lots of clever little things that I missed the first time around, and I'm still impressed by how he put out such an insane premise (library police) and just rode it out in a perfect pastiche of procedural crime fiction.

HEROBEAR AND THE KID - THE INHERITANCE [2003]
This is a collection of the five issues of Mike Kunkel's introduction of his characters, which made a big splash when first published from 1999-2002, but sadly didn't continue back then except for an apparently unfinished crossover with a book called DECOY and a solicited but unpublished second series. In 2013 Kunkel finally returned to the book, with a serialized reprint of the original book and two new comics, a "Special" and an "Annual", with a new mini-series set to start soon. I've got the two new books ready to read digitally, but figured I should re-read this one first. I still like it, but not as much as I did when it was new and I read it out of order (as I recall, I started with #4, liked it a lot but couldn't find the earlier books, got #5 when it came out and then later got #2 and #3, and only read #1 when this collection came out). Still very good, and I'm definitely in for the new material.

THE TALE OF ONE BAD RAT [2010]
This is the current hardcover edition of Bryan Talbot's comic which I first read when it was serialized in four parts back in 1994-1995. This is the story of Helen Potter, who we meet as a homeless teen in London and follow on her journey to put her life back together and deal with the sexual abuse in her past. All of this is intertwined with a lush visual look at the English Lake District and the works of Beatrix Potter, including a dead-on allegorical pastiche of a Potter book. Talbot's afterword explains the fascinating way that the story grew organically from a number of interests and events. This and ALICE IN SUNDERLAND are probably tied as my two favourite Talbot works, the winner being whichever I've re-read most recently, and guarantees I'll give anything he writes a try, like his upcoming book (with Mary Talbot and Kate Charlesworth) about suffragettes in Edwardian England.

BIGG TIME [2002]
This is an original graphic book by Ty Templeton, about a homeless man named Lester Bigg who finds out his bad luck is due to his cruel and somewhat incompetent guardian angel Stavros, who he can suddenly see. Bigg coerces Stavros to use his powers to make Bigg famous, and comedy ensues. This is always an amusing book, few comic book artists can manage wild slapstick as effectively as Templeton, and there are a lot of clever bits of dialogue and bizarre plot twists. It also has an odd surprise connection with an earlier unfinished Templeton work.

And some books I'm in the middle of reading (generally I'm trying to limit myself to 10-15 pages at a sitting for each, every few days):