From 1984 to 1990, AMAZING HEROES published 13 Preview Special issues looking at what publishers had planned for the near future. I wasn't buying comics through much of this period, so I only bought the last four of these new off the racks, but over the years I picked up any of the earlier ones when I came across them, since they often had great covers, some interesting background information on series of the past (helping to guide me to a few back issues I was interested in), often coming straight from the creators talking in the early stages of the project, and even more interesting information on projects that didn't come out for whatever reason, or were heavily changed by the time they did. Also there was usually a decent selection of artwork, some of it never seen anywhere else.

Anyway, since I now have all 13 issues, I figured this post would be an entertaining way to look at these issues and keep track of some of the more interesting tidbits that I might sometimes find myself hunting for. This is just a preliminary look, I'll add to it as time goes by, and if you remember anything worth mentioning in them please leave a comment and I'll look it up and add it.

---AMAZING HEROES #39 [January 15, 1984] - The first Preview issue, as you might guess from the painfully dull cover, eight bits of black and white art from various books. It would get better soon, trust me. The issue itself is also low on highlights, and I'm not even that familiar with a lot of that era to know if some of these books even came out as planned. Still, there was some interesting stuff.

pg026 - On a rather odd note, there are 2 1/2 solid pages of Mark Evanier talking about the BLACKHAWK series that he was doing with Dan Spiegle, with lots of information on his takes on each character. Then it all ends with a short note that Evanier and Spiegle were soon leaving the book, which would end up being cancelled.

pg116 - On the other end of the scale, Walter Simonson was just beginning his long run on THOR, and also gets a long preview with his thoughts and plans for various characters.

pg128 - And Steve Gerber talks for two solid pages on his plans for the second monthly WONDER WOMAN book. What, you don't remember the Gerber written WW series of the mid-1980s? Come on, it was classic. Anyway, an interesting look at one of those roads not travelled.

pg032 - Some of the oddest things get fairly long previews, like the full page given to CAPTAIN CARROT - THE OZ-WONDERLAND WAR, then planned as a six-issue series, eventually coming out two years later as three double-sized issues. Nice bit of Carol Lay pencil art from the book.

pg100 - One of the more interesting things in this issue, the SWAMP THING preview is just a straight transcription of a phone interview with Alan Moore, just shortly after he started on the book, with some interesting bits about what he was hoping to do with the book and how working with DC was ("I'm finding the whole experience with DC a real education and a pleasant experience..."). Also, a nice little monster sketch that appears to be a Steve Bissette piece that wasn't from the actual comic.

pg065 - I'm still looking for a copy of the Idaho Comics IT'S A POTATO series, which I hear revolutionized the funny vegetable genre. Actually, this was one of the "joke entries" that occasionally appeared amidst the previews, one that became a bit of a running joke in AH.

pg078 - Man, a METAL MEN mini-series by Robert Kanigher and Irv Novick. I'd have liked to have seen that...

pg094 - And Joe Kubert on the 12-issue REDEEMER mini-series. What a year it would have been...

pg112 - And a SUGAR&SPIKE monthly series mixing reprints and new stuff from Sheldon Mayer. You're killing me here DC...

pg046 - Apparently back in 1984 Fantagraphics was planning to publish a full colour bi-monthly comic called DITKO'S WORLD, featuring whatever Ditko came up with each issue. Never came to pass, of course, I guess some of the material wound up in black and white in the Renegade REVOLVER series in 1986, though I'll have to check the two bits of art they have to see if they made it into that.

---AMAZING HEROES #62 [January 1, 1985] - The cover improves tremendously with this issue, an original Jaime Hernandez piece of some of his LOVE AND ROCKETS characters enjoying a few of the comics of the day, sort of setting the theme for the next few covers.

pg126 - Intriguing non-existent comic, THRILLER SUMMER SPECIAL, where Robert Loren Fleming talks about returning to his series of a few years earlier with Keith Giffen on art and including a Superman team-up in DC COMICS PRESENTS. A later AHPS mentions that this all came as a surprise to DC...

pg006 - Alan Moore made quite a splash in the year since the previous issue, and the first page of previews has one of his lost projects, the Fantagraphics book with the placeholder name "Alan Moore's Comic", an anthology of whatever he felt like that issue, with planned contents including a humour story set at a comic convention and a biography of Aubrey Beardsly.

pg134 - Moore also starts talking about WATCHMEN in this issue, well before it came out, but already well beyond its "Charlton heroes" origins.

pg046 - They still weren't getting a lot of original art, but there were a handful of pencil images, like this Sal Buscema piece from ETERNALS.

pg123 - While Gil Kane's TALLUS OF THE WILDERNESS SEA starts off at 12-issues and with Jan Strnad writing. More on that later.

---AMAZING HEROES PREVIEW SPECIAL #1 [Summer 1985] - The concept spins off into its own twice-yearly magazine this time, and Scott McCloud continues the "your character with a pile of comics" cover theme (plus a sketch for this cover and two other potential covers inside). Lots of little jokes on the cover, like Jenny reading IT'S A POTATO. 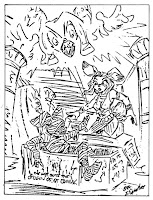 pg025 - The funny animal anthology CRITTERS launched with lots of plans, some of which came to pass, some didn't. The Cutey Bunny serial by Joshua Quagmire was one that didn't, but there was a cover rough from him in here. Not sure if he ever did that story in another venue.

pg083 - MOONSHADOW was in progress at the time, and squelching rumours from the previous issue that it might be cut short, as well as showing off a great Jon J. Muth sketch for one of the painted covers.

pg020 - Apparently Fantagraphics legal defence book ANYTHING GOES was originally titled BRIEFS and was supposed to have a Gerber/Kirby/Sinnott 4-page Destroyer Duck story, instead of the Captain Victory and Silver Star pages by Kirby and Sinnott that it came out with.

pg025 - CHEAP SHODDY ROBOT TOYS, a one-shot drawn by Fred Hembeck for Eclipse. That never came out, did it?

---AMAZING HEROES PREVIEW SPECIAL #3 [Summer 1986] - Stephen DeStefano and Karl Kesel provide the last and best of the "pile of comics" covers, and the best of all the AHPS covers. A little bittersweet, as this issue also announces that 'MAZING MAN was cancelled, but still, just look at that cover (though where is the candy store with a spinner rack that carried CEREBUS, LOVE AND ROCKETS, STEVE CANYON and a non-existent MR. TERRIFIC comic?).

pg121 - WATCHMEN is in full swing, and there are two Dave Gibbons sketches to mark it, one rough of the Owlship and one of Rorschach. 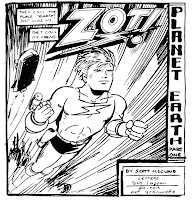 pg129 - ZOT! returns for real this time around, after several previews promising it, and Scott McCloud has some of his pencils for the first black and white issue.

---AMAZING HEROES PREVIEW SPECIAL #5 [Summer 1987] - Oh man, Art Adams drawing the Flaming Carrot and Gumby on the run from a giant baby-controlled robot? That just ain't right. You can't just draw that and not have a comic to back it up.

pg109 - The SPACE GHOST one-shot by Mark Evanier and Steve Rude is previewed, including a look at some of Rude's character sketches.

---AMAZING HEROES #133 [January 15, 1988] - The AHPS returns to ah proper for some reason, and gets so thick it has to be squarebound. Michael T. Gilbert and Paul Chadwick bring together their respective characters Mr. Monster and Concrete this time. I think it's the musical note Concrete is thinking that makes it poetry. 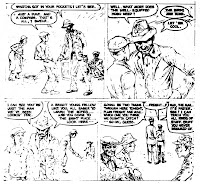 pg098 - Preview of James Vance and Dan Burr's KINGS IN DISGUISE has a nice treat with a bit of Burr's pencils.

---AMAZING HEROES #145 [July 15, 1988] - Break from the crossover covers with Dave Stevens providing a generic ROCKETEER image (a rough of it even appears inside as a rejected cover). Nice enough, I guess, but nothing special, and the first only to refer to a single comic. 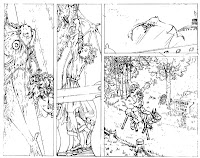 pg271 - Pencils of one of Eric Shanower's OZ graphic novels then being published by First.

pg173 - Evan Dorkin provided a lot of original pieces for the previews of his books, most of which I think eventually made it into one or another of his collections. This issue has a nice PIRATE CORPS cast pic.

---AMAZING HEROES #170 [August, 1989] - Back to the generic cover, with Todd McFarlane providing a bunch of Marvel heroes in a mismatched standard set of poses. Cap seems a lot happier than the Torch or Wolverine. 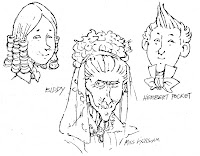 pg017 - Rick Geary has some character sketches for his version of Great Expectations for the CLASSIC ILLUSTRATED revival from First.

---AMAZING HEROES PREVIEW SPECIAL #10 [February, 1990] - And somehow it becomes a separate publication again. Rich Heddon and Tom McWeeney of ROACHMILL bring together a diverse range of period characters in a nice if somewhat frantic cover.

pg139 - A great looking Sam Glanzman sketch page for some of the characters and settings of his ATTU graphic novels from 4Winds.

---AMAZING HEROES PREVIEW SPECIAL #11 [Winter 1990] - Matt Wagner produces the cover of the final issue of AHPS, plugging his BATMAN/GRENDEL crossover that wouldn't actually come out for a few years thanks to various business things. Not too bad a cover, although lacking the real fun aspect of the best of the previous ones.

pg069 - Excellent Mike Ploog sketch for what became his painted cover to LONE WOLF & CUB #42. Apparently if the series had continued the cover artist for the fifth year would have been Paul Chadwick.