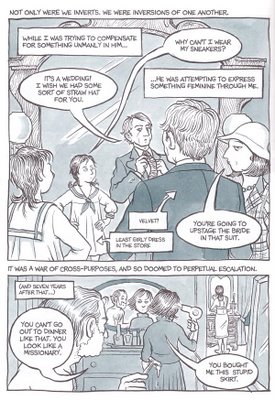 FUN HOME is a recently released comic from Alison Bechdel, of Dykes to Watch Out For fame. For this one she goes autobiographical, exploring her relationship with her father, telling a lot of other family stories along the way.

This was an excellent book. I'd re-read a lot of the DTWOF books over the last few months, since this book was announced, and while those are all pretty consistently great, this is really a level above those (although a few of the longer back-up stories that Bechdel did in addition to the strips in the collections provided a hint of what she would do with a more open format). It's a pretty structurally complex story, with a lot of jumps back and forth in time, but the art and words are clear enough that it's never hard to follow. The narrative also depends a lot on literary references, to writers like James Joyce, Scott Fitzgerald and Albert Camus. Those are important to understanding the relationship she wants to explore, and at times they're a bit overwhelming if you aren't as familiar with the works as the characters are, but for the most part Bechdel does an admirable job of providing enough context and key quotes from the works that you can still come away with enough background to understand the story even if there is some subtext you might miss.

I was a little worried when getting close to the end that Bechdel wouldn't be able to finish the story in a satisfactory way, and just kind of trail off to a stop instead of a proper ending, which seems to be common in a lot of longer alternative comics. I was glad to be proven wrong, as the ending nicely ties in to the beginning and nicely touches on some of the major themes from throughout the book.

The art might even be more accomplished than the writing. A lot of the book revolves around the Bechdel family home in a small Pennsylvania town, and has one of the best senses of place that I've seen in comics, with a lot of attention paid to little bits of geography and architecture that make it all seem real. She also has to draw a lot of characters at various ages through more than twenty years of real time, and manages that with a lot of minor touches without making it seem like she's drawing from some photographic references.

Highly recommended, one of the best new comics I've read in a while.