BLOOD SONG is a massive 300-page wordless graphic novel by Eric Drooker, illustrated by engravings on scratchboard which are then watercoloured (mostly with that blueish tinge of the pages below, with sudden bursts of brighter colours where appropriate). I have no idea what that engraving actually entails, but it sure looks like it must be a lot of work. 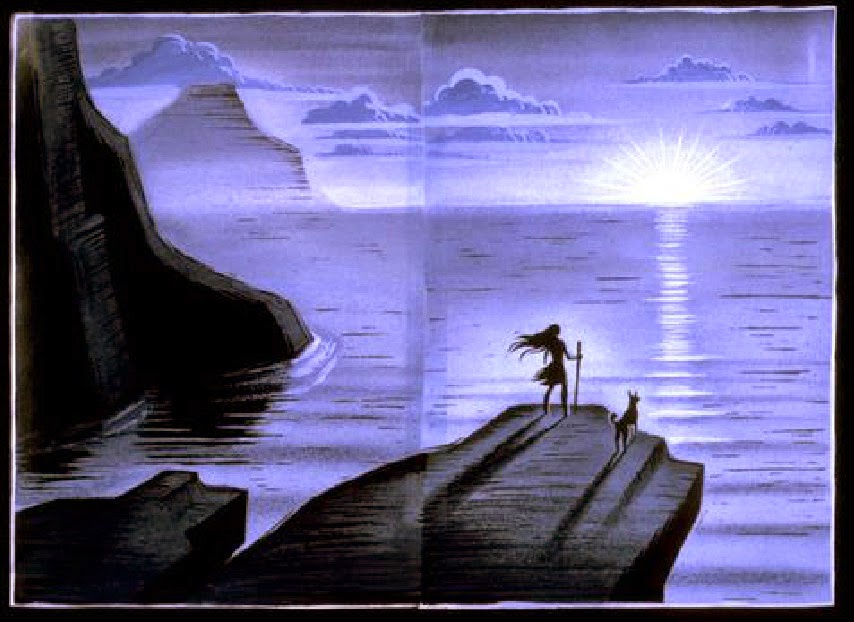 The book is called "A Silent Ballad", which is a suitable description. It follows a girl living in a small village after the arrival of some non-specific war (echoing news and film depictions of Viet Nam and Cambodia, but generic enough to apply to too many 20th century and beyond events) which drives her beyond the sea to a very different world.

I'm generally not a huge fan of what few longer completely wordless comics I've read. It's something that I tend to think works better either in shorter pieces or sections of longer works. This one worked better than I expected, I think because of that "Ballad" feel. It was as much a song as a story, and that tended to slow down the pacing. The lack of identity of the characters and settings also emphasized the broader scope of the story.

And the art was just fascinating to look at. Clear and easy to interpret, but with a lot of detail that forces you to slow down to appreciate it all. Drooker does some fascinating things with the layouts, like in the panel above having certain elements break the panel border in such a way to create a greater feeling of distance. There are a lot of other subtle little effects that read automatically and then you pick up on why they work when you slow down.

Truly fascinating stuff. Part of me does feel that it's a little bit long for the story it's telling, like the album version of a song by some 1970s progressive rock band having a technically brilliant but somewhat ponderous instrumental solo that can be easily cut for the radio-friendly single, but that's a minor complaint considering the overall achievement.

Drooker has a sample of the book over on his website.