Rather odd little twist ending on this story about a Pharaoh in ancient Egypt who is pushing his slaves to complete a task on the pyramid, certain that death will come by sundown. As the day goes on, he begins to show compassion for his slaves, offering them food and water and gold, getting them to work faster, and then almost dies himself trying to avoid a slave child. 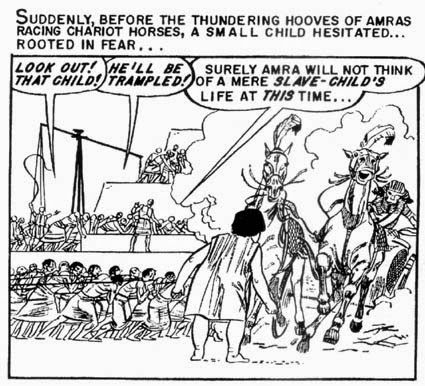 The twist, which ended up requiring some pretty strained language in the early bits of the story, is that the task he's set the slaves to isn't building the pyramid, it's demolishing the pyramid to free his son, who fell in the pyramid and would have run out of air by sundown. Well, at least you couldn't have seen it coming. A lesser bit from the New Direction era, though some of the details Krigstein brings to the setting are well done.