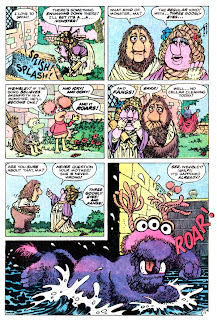 Among the many books of Marvel's Star Comics line of the 1980s was FRAGGLE ROCK, eight issues based on the Jim Henson created TV show (with some of the issues being reprinted a few years later in a second series). The issues that I've seen are all loosely adapted by writer Stan Kay from episodes of the show (this one from the episode "Believe It or Not"), but the real reason to pick them up is for the excellent artwork (and colouring) by Marie Severin. She was perfect for this book, capturing the look and feel of the Muppet characters and the sets of the show while still using a lot more open storytelling than was possible with the puppet constraints of the show. Not that easy to to, and I've seen some awful Fraggle Rock and other Muppet merchandise to prove it. In particular she does a great job of capturing the the body language which was always a big part of the charm of the show. 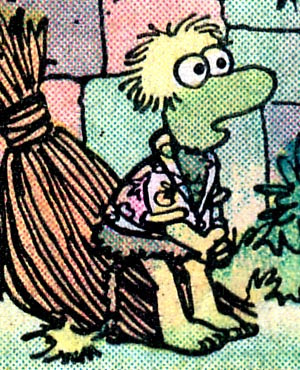 The 22-page story in this issue is re-titled to "The Monster That Could Be Anything", and as I said it's based on one of the episodes of the show, but very loosely. For one thing, it completely drops the Doc and Sprocket framing sequences, which aren't much of a loss in this case, and makes a few other modifications, a few of which are actually improvements. The story has Red and Wembley deciding to go off on an adventure (which, of course, means Red deciding and Wembley going along) and meeting a creature in the Gorg garden who has the power to become whatever other people believe he is. They name him Skenfrith and plan to take him back to Fraggle Rock, but before they can he winds up in the water-filled Gorg cellar, where his noises cause the Gorgs to think he's a monster, which means that's exactly what he becomes.

The second half of the story deviates more from the TV version, with Skenfrith actually leaving the cellar in his monster form and briefly even flying and breathing fire, instead of Ma Gorg getting trapped in the cellar with Skenfrith and the Fraggles. The comic version is definitely an improvement, especially with the more open layouts available. The ending is roughly the same, with Wembley managing to convince Ma Gorg that Skenfrith isn't a monster, but makes a bit more sense in the comic. Eventually Skenfrith ends up back to his old self, and a pet of Junior Gorg.

Pretty good adaptation overall, and especially great to have some quality Marie Severin artwork in her best comedy style. I like her super-hero and fantasy work well enough, but she really didn't get enough chances to work the funny after NOT BRAND ECHH (and where's my ESSENTIAL NOT BRAND ECHH?).