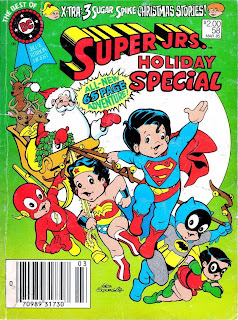 Mike Sterling of Progressive Ruin fame recently turned up an odd bit of comic-book merchandise, with infant versions of the DC superheroes (also seen on a Green Arrow fansite) known as the Super Jrs. I figured it was past time for a critical re-appraisal of their one comic book appearance (in english, at least), from BEST OF DC #58, March 1985. From what I can gather, the characters were designed for merchandise sold mostly outside the US. This issue had their origin, a long 68-page story (plus front and back covers). Yes, I know the cover says 65-page. The covers are signed by Vince Squeglia, not sure if he did the interior art as well (there definitely seems to be some sort of time-gap between the cover and interiors, as "Wonder Tot" has an eagle emblem inside and a wings/WW emblem on the cover, a change DC had made in the regular Wonder Woman book a while before this).

This has proven to be a difficult story to read for two reasons. First, the printing on these mid-1980s digests is clearly was not meant to last for 20 years. Either that or my eyes weren't, as I'm sure this looked better before. The second reason is that the narration is all told in verse, which is really forced at times. 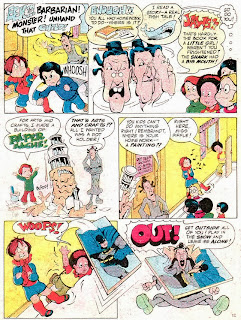 Anyway, the story revolves around an "Isle of Forgotten Toys", where toys replaced by new Christmas gifts gather and are bitter about Christmas. So, y'know, not the most original concept in the world. They enlist the meanest kid in the world, Wallace Van Wealthy III, who is left in Miss Piffle's Nursery School over the holidays along with a group of five orphans. Wally gets transformed into a junior version of the Weather Wizard and makes it warm so people won't get into the Christmas spirit.

The Spirit of Christmas then transforms the orphan kids into junior versions of their heroes, Superman, Flash, Wonder Woman, Batman and Robin. Their first battle is against a giant snowman, after which the boys are scattered to various dimensions for solo missions in places like Candyland, Shadowland and a world of Living Calendars, finally regrouping for the final battle, in the spirit of the classic JSA and early JLA stories before Santa sweeps in to save the day and the villains learn the error of their ways. 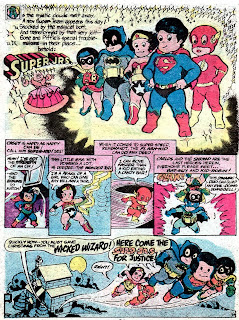 Not exactly a classic, but some goofball fun, and some of the artwork is amusing. If you get past the verse narration there's some funny dialogue.

Fortunately the book finishes up with 28 pages of SUGAR & SPIKE reprints by Sheldon Mayer which are much better. The first one in particular, "Spike's Big Problem", is one of my favourite S&S stories, with lots of slapstick and verbal wit as the kids try to figure out snowball fights and the nature of humour.